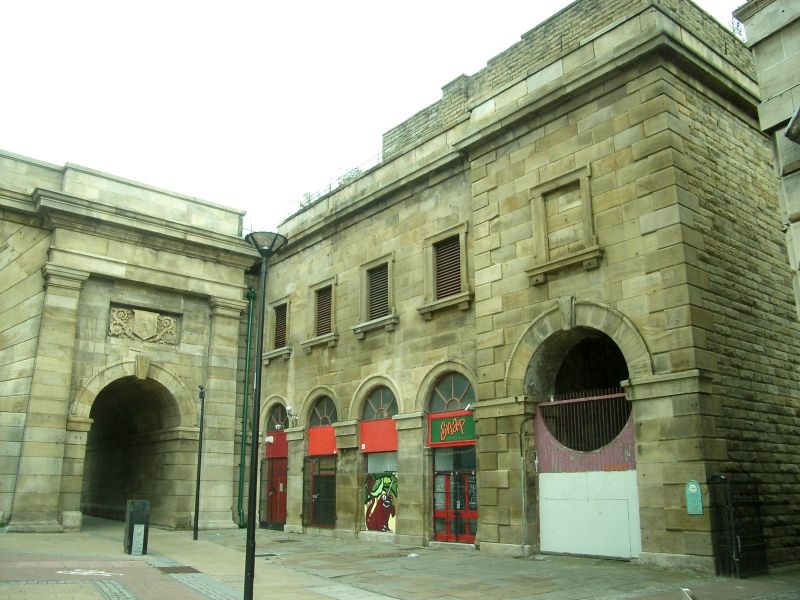 GV
II*
Railway bridge and adjoining viaduct and buildings.1848. By John Fowler (Engineer) and Weightman & Hadfield (Architects). For the Manchester, Sheffield & Lincolnshire Railway Co., in conjunction with the opening of the line to Manchester via the Woodhead Tunnel. Altered c1955. Restored 1989-90. Ashlar and coursed squared stone, with ashlar dressings.

EXTERIOR: wide elliptical central arch with voussoirs, flanked by single round-arched footways flanked by Tuscan pilasters, with imposts, keystones and hoodmoulds. Above each footway arch, a relief panel with a coat of arms. This main structure has a restored cornice and coped parapet. To north west, a viaduct of twelve round-headed arches with voussoirs, approximately 130m long, with cast-iron guard rail and stanchions. Most of the arches have brick infill, two and three storeys, serving as workshops. Final arch, to left, partly covered by a curved flanking wall.

To south east, an attached building and entrance to the former Victoria Station (not included). Two storeys; five window range. Plinth, cornice and coped parapet. To left, four square blank windows with moulded surrounds and corbelled sills. Below, a four bay round-arched arcade with imposts and hoodmoulds, and radial fanlights. Right opening has metal gates, and the three to left have C20 shop fronts. To right, a slightly projecting entrance bay, with quoins. Above, a similar window, and below, a round-arched entrance with imposts, keystone and hoodmould, containing metal gates, wooden ticket office, and stone stairs. On the south east side, a similar building, two windows, with C20 shop front in the arches below. Beyond, to south east, a viaduct of 27 arches. These arches formerly carried Victoria Station, and are wider than those to the north west. Two arches spanning the River Don have a parallel late C19 lattice girder span with stone abutments. Other arches span Furnival Road, Effingham Street, Effingham Lane and the Sheffield & Tinsley canal. Most of the remaining arches are infilled, and are occupied as stores and workshops.

This building is an outstanding example of monumental early railway architecture. The railway bridge was previously listed on 28/06/73; the adjoining viaduct and buildings are included in the list for the first time.
(Wicker viaduct refurbishment position statement: Sheffield Development Corporation: 1988; An Architectural Survey of Urban Development Corporation Areas: RCHME: Sheffield: London: 1989: 20).