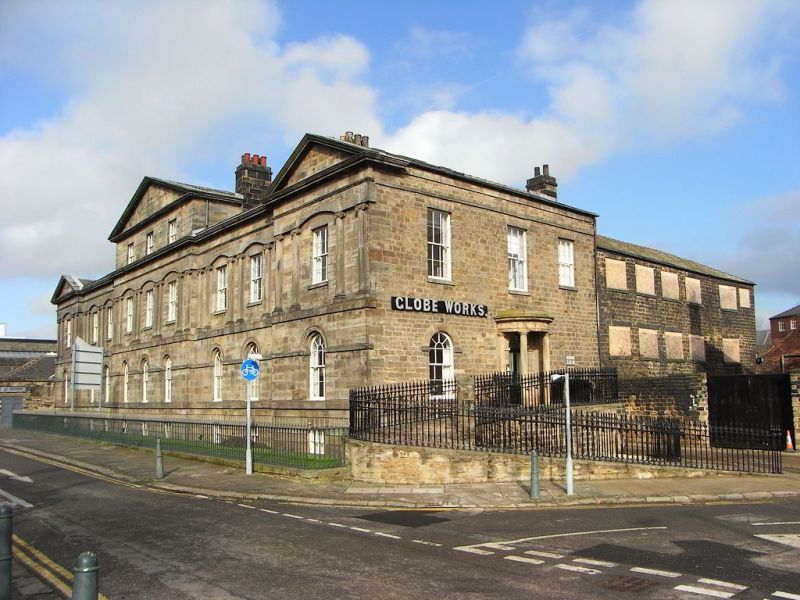 SUMMARY OF IMPORTANCE
Globe Works was identified as being of special architectural and historic interest by English Heritage during a thematic survey undertaken to assess the best surviving examples of buildings associated with Sheffield's metal manufacturing and metal working trades. It was identified as being of particular importance as the earliest known surviving purpose-built integrated cutlery and edge tool works to retain both front display range and workshop ranges.

Large purpose-built cutlery and edge tool works are very distinctive to the industrial identity of Sheffield, which during the C19 became known throughout the world as a centre of excellence in the manufacturing and processing of steel. Against the loss of many such buildings in the late C20 due to the severe decline of the industry, Globe Works is a highly significant survivor at the vanguard of such integrated urban works. It demonstrates the layout and building types of such a complex, including rare examples of specific workshop types as well as the more generic cutlers' workshop. Approximately eight sites in Sheffield survive retaining evidence of individual hand forges or grinding hulls (rooms), or both. Globe Works has four hand forges, and the only known remaining example of urban back-to-back grinding hulls. The complex clearly meets the criteria for listing of pre-1840 industrial buildings at a national level. The early date of the works, architectural quality of the architect-designed front range, survival of hand forges and particular design of the grinding hulls justify the Upgrading of Globe Works to II* from the present Grade II listing in the light of an enhanced appreciation and understanding of Sheffield's industrial metal-working buildings. Globe Works also has strong Group Value with the adjacent Wharncliffe Works, Green Lane, Cornish Works and Cornish Place on Cornish Street, Brooklyn Works, Green Lane Works, and The Former Ball Inn on Green Lane, Ball Street Bridge, Kelham Weir, William Brothers of Sheffield (former Ebenezer Wesleyan Chapel), South Parade, and The Fat Cat Public House, Alma Street.