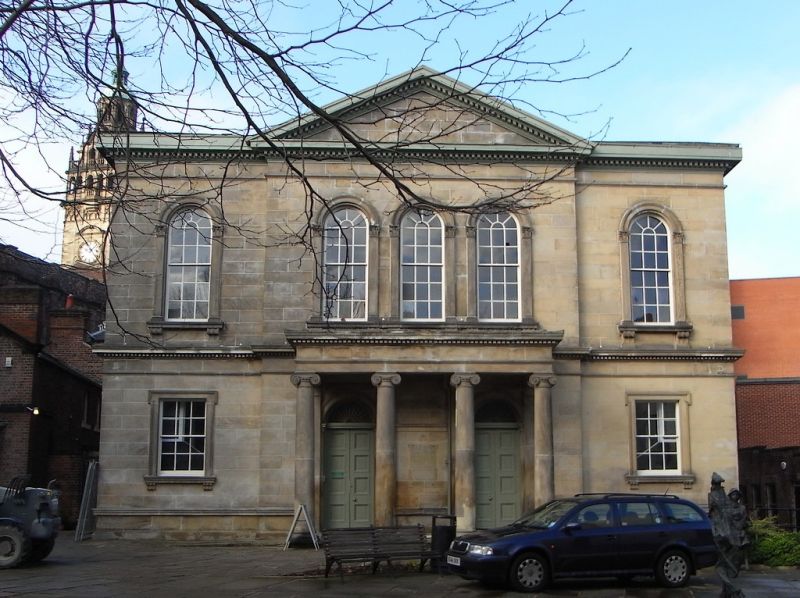 Unitarian chapel. 1700, raised and refronted 1847-48, vestry
added 1900. Brick with ashlar front and slate roof. Classical
Revival style.
EXTERIOR: plinth, dentilled cornices to first floor, dentilled
wooden eaves cornice and pediment. 2 storeys; 5 x 4 windows.
Windows are mainly round-headed glazing bar sashes with
bracketed sills.
Front has a slightly projecting centre with pediment and 3
windows with moulded surrounds with pilasters. On each side,
single similar windows. Below, 4-column Ionic portico with
dentilled cornice. Beneath it, 3 round-headed recesses, the
outer ones with panelled double doors and fanlights. On either
side, single 12 pane sashes with eared architraves. Returns
have string courses and 4 windows on each floor. Gabled single
storey vestry, to south-east, has a large square bay window to
east and a smaller canted bay window to south.
INTERIOR has a panelled oval gallery, 1848, on 3 sides, with
iron posts with Corinthian capitals. Dentilled cornice and
enriched painted ceiling with bosses. East end has single
corniced 6-panel doors flanking the pulpit and above, a
round-arched opening with organ case above and screen below.
On either side of the opening, stained glass windows c1945, by
Hugh Easton. West end has 2 doors with pedimented glazed inner
porches. Entrance lobby has moulded cornice and at each end, a
stone cantilever dogleg stair with cast-iron balustrade.
Vestry has moulded cornice and coved ceiling, and fireplace
with pilasters, pediment and overmantel mirror.
STAINED GLASS: 5 windows to the ground floor, 1899, by Henry
Holiday. 3 late C19, four 1917-1920. Fittings include oak
pulpit, c1900, Classical style, with canted front and spiral
stair, carried on 6 Doric columns. Plain benches c1870.
MEMORIALS include a draped oval marble tablet with cherubs and
winged skull, 1721; tablet with apron and urn, 1789,
attributed to Chantrey; draped oval marble and slate tablet,
1830, by Edwin Smith of Sheffield; Classical tablet with
portrait medallion, 1861.
(Welcome to Upper Chapel (visitors' guide); The Buildings of
England: Pevsner N: Yorkshire: The West Riding: London: 1967-:
452-453).