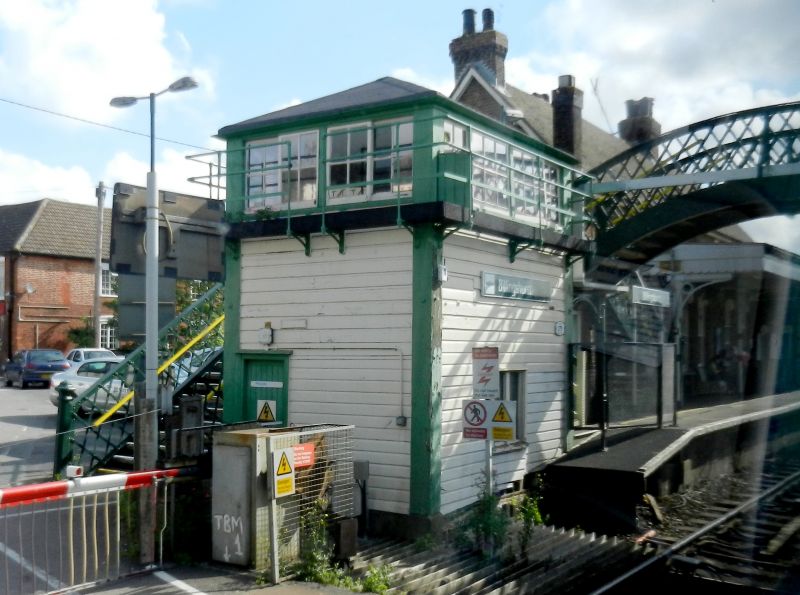 Signal Box. 1876 for the London, Brighton and South Coast Railway, supplied by Saxby and Farmer. It is an S & F type 1b box. Timber framed with a hipped slate roof. The locking room is clad with horizontal boarding with a large structural post at each corner, 2-light window. The upper floor has continuous glazing on the track side apart from a central timber mullion. Centre fixed 6-pane windows with an outer 4-pane sliding sash on each side. The short side of the box looking on to the road has two 4 + 4 sliding sahes with another to the rear. The platform end has a timber stair with a door and window above; the window is obscured by the immediatley adjacent footbridge.
The interior contains a 15 lever Saxby & Farmer rocker frame No 2273.
History: This signal box is reliably recorded as having been erected in 1876, but production of the Type 1 box had ceased several years earlier(Type 2 began in 1868), and it may be that this box was re-used from an earlier site. It may thus date from the 1860's and is anyway probably the oldest working signal box with original frame on the British system. It is the only remaining example of the first standard signal box design and comes from the company which first patented the interlocking frame and thus the fully fledged signal box as a building type.
References: The Signalling Study Group, The Signal Box, OPC, p82.Michael A Vanns, Signal boxes, Ian Allan, 1997.