Numbers 8, 10 and 12 and Attached Area Railings 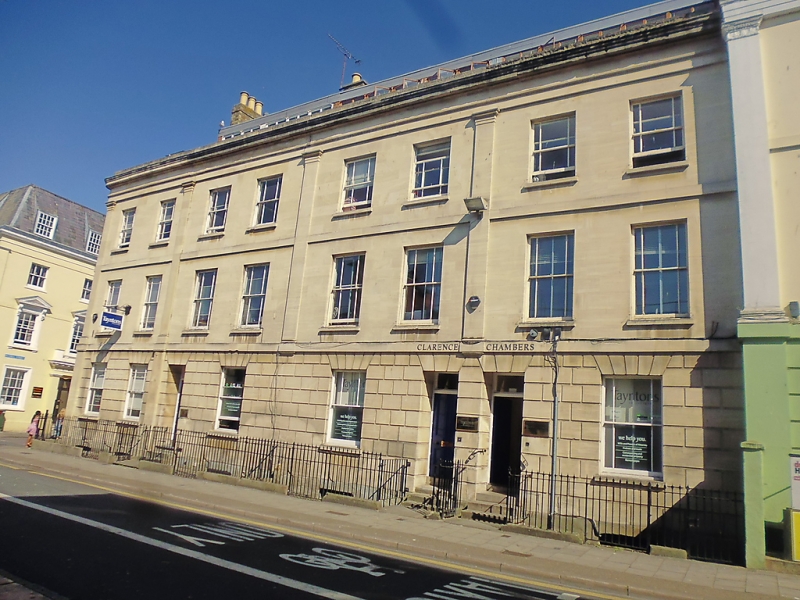 Terrace of four town houses, now offices. c1840. Part of the
development of Clarence Street by William Rees, builder. Late
C20 alterations. Ashlar, hipped slate roofs, brick stacks.
Nos 8 & 10 a double-depth, mirror-image pair, No.12 a similar
house but now part of 10: a large former house on corner of
street with entrance front and single-storey wing to left
facing Russell Street.
EXTERIOR: three storeys, basements and attics. On the fronts
facing Clarence and Russell Streets the rusticated ground
floor is capped by a raised band at first-floor level; the two
bays at the north end are defined by shallow piers; on the
upper floors the width of the houses, each of two bays, is
defined by slender, giant pilasters with moulded bases and
capitals, with a raised band between them at second-floor
level, supporting a crowning entablature with parapet above
masking the roof dormers.
On the ground floor a recessed doorway with rectangular
fanlight and panelled door to each house, to left or right,
approached by stone steps above the basement areas, and a
single sash, except for two sashes at north end of No.12; on
the first floor two sashes and on the second floor two sashes
to each house, all with vertical bars to the sides except for
sashes in the two bays at north end which have margin bars.
Symmetrical front of No.12 facing Russell Street of three bays
with slightly projecting central bay, on the ground floor in
the centre the wide entrance doorway to No.12 Clarence Street,
with rusticated jambs and segmental-arched head, is framed by
pilasters and entablature with segmental pediment, recessed in
the doorway a glazed late C20 door and surround; in bay to
each side of doorway a sash; on the first floor in the central
bay a semicircular arched sash with moulded imposts and
archivolt with raised keystone, in the bay to each side a sash
in opening with moulded, eared and shouldered architraves with
raised keystone in the head and projecting sill on
end-brackets; on the second floor in the central bay two

narrow semicircular arched sashes in a frame of panelled
pilasters above a balustraded apron and shaped brackets
supporting a cornice, in the bay to each side a sash in
opening with shouldered architrave with projecting sill on
end-brackets; all the sashes with margin bars; single storey
wing to left has offset plinth, moulded cornice with parapet
and a seven-light window with stone mullions and projecting
sill.
INTERIOR: not inspected.
SUBSIDIARY FEATURES: wrought-iron railings to basement areas.