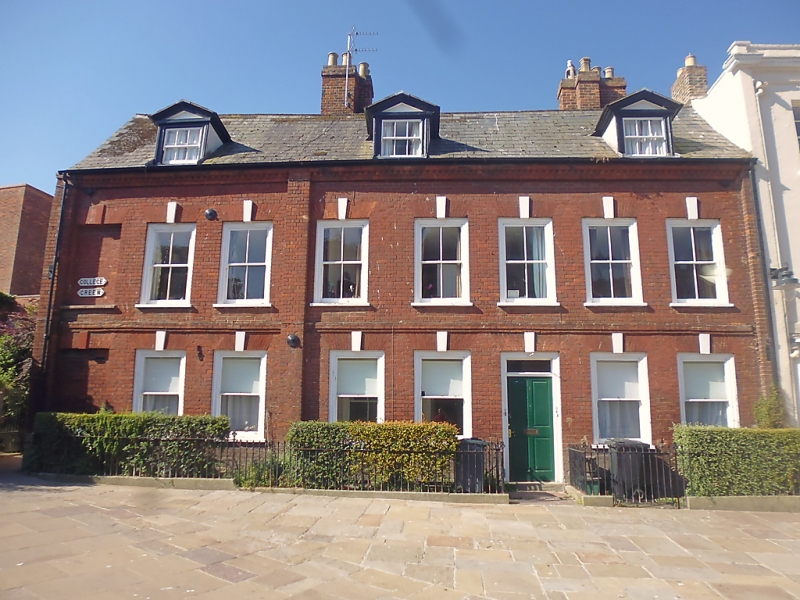 Three tenements, later house, now two flats and an office.
c1740 with C19 alterations. For Henry Williams, Yeoman. Red
brick with gauged work to fine facade; end-gabled slate roof,
gabled dormers, two brick stacks. Double-depth block with an
inner yard at rear and a projection at the east end at
first-floor level over the public passage way leading into
College Green from St Michael's Gate (qv).
EXTERIOR: two storeys, attic and cellar; the front of eight
bays with a strip pilaster at either end and between the third
and fourth bays from the left, probably an indication of an
original division between tenements; a raised band at
first-floor level between the pilasters and a cogged brick
eaves cornice; the five bays to right are symmetrical on the
ground floor in the central bay the entrance doorway with
rectangular fanlight and four-panel door with fielded panels,
in the two bays to each side C19 plain, horned sashes in
original openings; in the three bays to left a blocked doorway
in the left-hand bay and two similar C19 sashes. On the first
floor the five bays to right have C19 sashes with central
vertical glazing bars, but the opening for the left hand sash
moved to the left closer to the intermediate pilaster in the
C19; in the three bays to the left a blocked window in the
left-hand bay and two similar sashes. All the openings have
rubbed brick flat arches with projecting key stones; the door
and sash frames have moulded architraves. Three dormers with
low pitched gables and casements with glazing bars (3x2
panes).
In the short wing built above the passage into College Green
from St Michael's Gate (qv), on the north and the south sides
a sash with glazing bars (3x4 panes).
INTERIOR: beyond the entrance lobby mid C18 dog-leg staircase
with solid strings, square newels, column-on-vase balusters
and moulded handrail. In room to right on ground floor a
fireplace with original bressumer with stopped chamfers; some
C18 joinery in rooms on the first floor.
This building replaced an earlier house on site leased from
the Cathedral Chapter.
(Eward S: No Fine but a Glass of Wine, Cathedral Life at
Gloucester: Salisbury: 1985-: 299, 312).