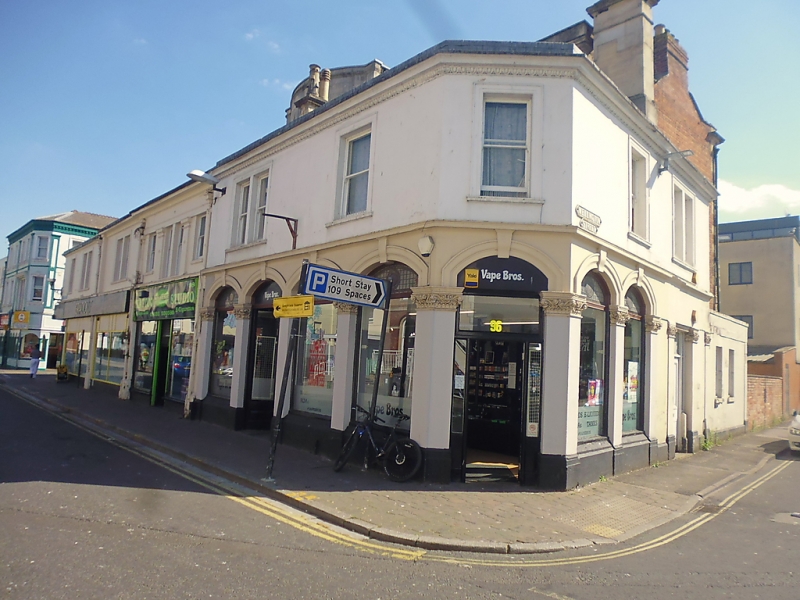 Formerly known as: Nos.52, 54 AND 56 BARTON STREET.
Shown on OS map as Nos 52, 54 & 54A Barton Street.
House, now shops and offices. c1800, built for William
Fendall, barrister and banker. Extended and altered in mid to
late C19 with shops along street frontage, C20 alterations to
shops. Brick, faced in ashlar to front and rear of original
house, stuccoed later additions, slate roofs. The house
apparently incomplete, a central cross-range with bowed walls
at front and rear, a two-bay wing to right and a single-bay
wing to left, shop extensions in several phases.
EXTERIOR: house of three storeys with full attic storey above
the central range and roof attics above the wings. Two lower
storeys of the original front elevation masked by shops; above
the third storey a crowning cornice, shallow pilasters to
either side of the central bow and to each bay of the right
hand wing, all with feather capitals on a continuous frieze
band below the cornice; the central attic storey has a thin
crowning cornice with a low coped parapet above; on the third
storey in the bow sashes with glazing bars (the central sash
3x4 panes) in a tri-partite window, a sash with glazing bars
(4x3 panes) in each of the two bays to right and in the bay to
left; the central attic storey on the bow has a Diocletion
window, the central sash with glazing bars.
The rear elevation, originally the garden front, has a partly
rusticated ground-floor storey capped by a moulded string
course and a crowning cornice similar to the front elevation;
on the first-floor the bays of the wings are defined by raised
quoins and on the second floor by shallow pilasters; on the
first and second floors of the bow tripartite windows with
sashes; sashes in the bays to either side except for casement
in first floor bay to right; on the second floor the sashes in
the bay to either side of the bow are set within slightly
recessed arched panels.
INTERIOR: not inspected.
This building was called Mynd house during C19.