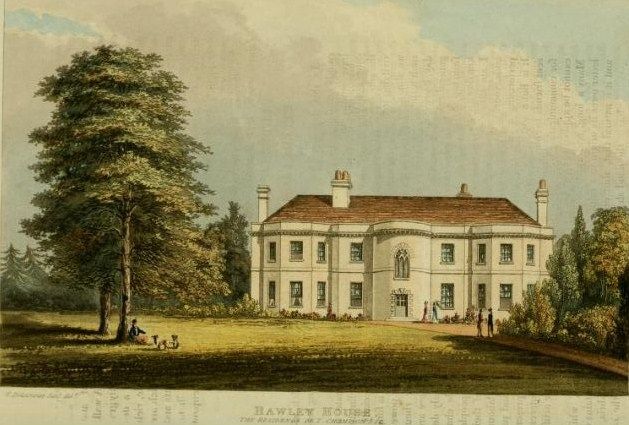 Large house, now partially divided into flats. Central part late C18 refronted
c1860 when the south east wing was added and the conservatory to the north west.
Cement rendered with large stone portico. Slate roof and cemented chimney stacks.
Original house has main entrance front facing south west. 2 storeys 9 windows.
Dentilled eaves cornice moulded band between floors and purlin . Central bow to
to 1st floor with round leaded window with Gibbs surround. Large stone portico
to ground floor with triglyph frieze and Tuscan columns and pilasters. Behind
are 2 blank niches and central stone doorcase with cornice and eared architrave
and 4 panelled door. To each side of the central bow is a mid C19 sash with
vertical glazing bars, horns and moulded architrave. To each side are 2 storey
canted bays with 3 windows each, mid C19 sashes with vertical glazing bars only
moulded architraves and with cornices on brackets to ground floor windows.
North east front has central pediment with blank oculus over 3 central windows
which project slightly and end canted bays with 3 windows each, the central
ground floor bays being doorways. The south east wing was added cl86O and is
also cement rendered with hipped slate roof. Irregular shape roof 3 storeys
with windows mainly sashes with vertical glazing bars only. Ground floor has had
an inserted late C20 bow. The entrance door has a curved open pedimented hood
and pilasters which may be reused for the older part of the house. Good mid C19
conservatory attached to north west. Its south west front has 6 round headed
wooden sashes with keystones fanlights above and curved glazed roof. Cement
rendered to rear with similar windows to main house. Interior appears to have been
extensively remodelled in the C19 but appears to contain a C19 staircase with turned
balusters in early C18 style and a mid C19 marble fireplace.