Church of St Alban the Martyr 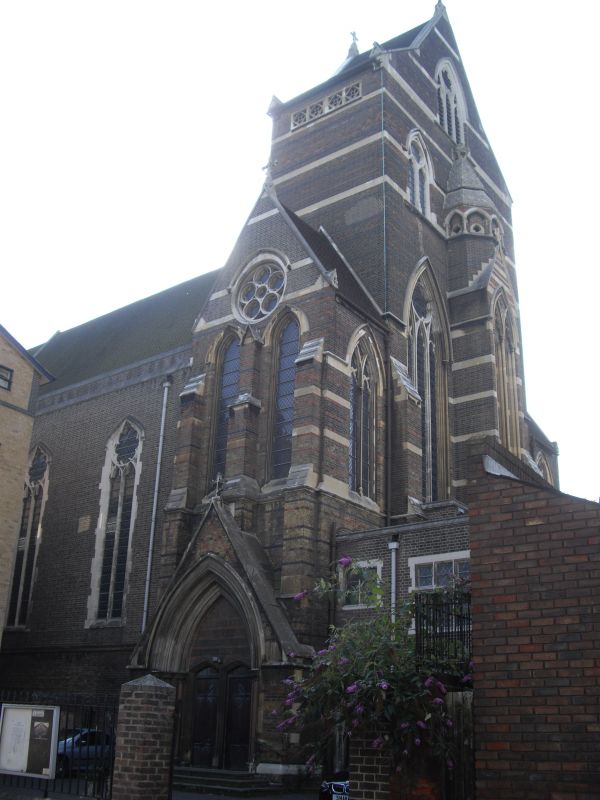 Church. Designed 1859, built 1861-62, architect William
Butterfield. Chapel 1891 by CHM Mileham. Burnt out 1941 and
restored 1959-61 by Adrian Gilbert Scott. Red and yellow stock
bricks with stone dressings. Tiled roofs. 7 bays in Gothic
style.
EXTERIOR: very tall, wide, aisled church with short transepts
abutting western tower with saddleback roof. Tower with
projecting, gabled central window with a small turret over. To
either side tall, narrow, Geometric traceried windows. Site
restrictions forced a blank east wall. Entrance through south
transept which forms a small chapel. In entry approach 'Jesus
being Raised from the Dead', sculpture of 1985 by Hans
Feibusch.
INTERIOR: Scott's simple but dignified scheme replacing
Butterfield's elaborate decoration. Tower opens into the nave
by a great arch (Butterfield's). Arcade rebuilt with stone to
lower levels, rendered above. Two-bay chancel with aisles of
one bay and east wall covered by a mural, 'The Trinity in
Glory', by Hans Feibusch, 1966. Stations of the Cross by
Feibusch. Some painted decoration on ribs of ceiling.
Cast-iron parclose screens to aisle chapels. West gallery with
organ. Mackonochie chapel by CHM Mileham survived bombing,
with stained glass 1885 and 1898 by CE Kempe; two stations of
the cross 1912 by Ninian Comper. St Alban's was one of
Butterfield's finest mature works, and remains a powerful
composition.
(Thompson P: William Butterfield: London: -1971).