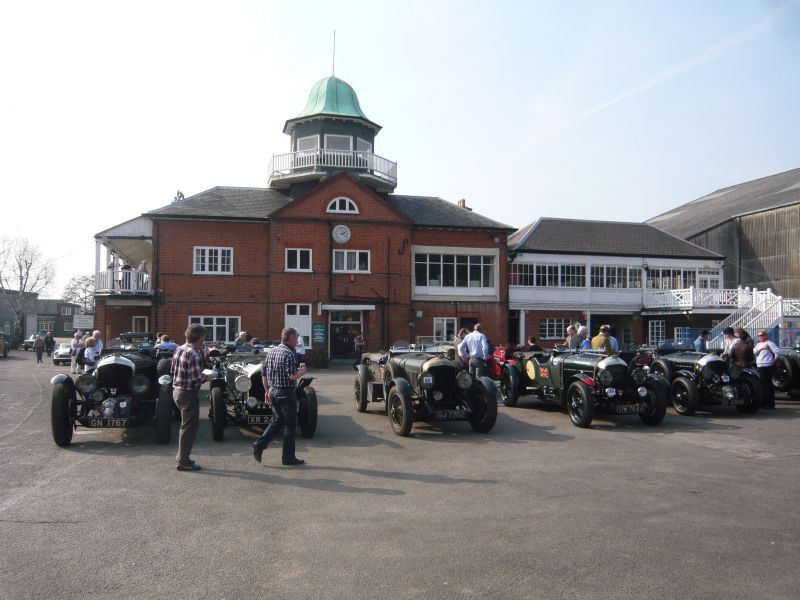 GV
II*
Clubhouse. 1906-7, for the Brooklands Automobile Racing Club (BARC), with later alterations and additions including those of 1930 by A.C Stedman, architect. Main block in red brick, with additional north block in steel frame; slate roofs, except cement tiles to rear.

PLAN: originally a double-pile block with central observation tower and weighing court and including to the south a first-floor grandstand, from where BARC members, guests and the press could view the racing. In early 1914 the building was extended to the north, with a first-floor restaurant with balcony and access stairs to east and open-sided car and motorcycle maintenance area below. Major alterations of 1929-30 included the partial enclosure of the first-floor grandstand and addition of restaurant to west. Later 1930s alterations included glazing of the first floor 1914 restaurant (and associated enlarged window to front elevation) and enclosure of the areas beneath the latter and the 1930 restaurant to create more BARC facilities.

EXTERIOR: front (east) elevation in neo-Georgian style, with slightly-projecting and pedimented central bay with lunette to tympanum and gauged and rubbed flat arches over timber casements; central door with overlights; cement-rendered surround to enlarged window to first floor right, an alteration associated with the improvement to the 1914 restaurant in the mid 1930s. Hipped roof surmounted by large octagonal copper-roofed observation tower and encircling timber balustrade.

Left-hand (south) elevation: brick ground floor with central recessed porch flanked by blocks with gauged and rubbed flat arches over windows to right, and later C20 soldier arches over later C20 five-light and three one-light windows to left; first floor grandstand in six bays with timber posts and balustrade, the inserted rendered wall having timber casements. Rear elevation has central pediment as the front, now set behind hip-roofed block with three segmental-arched openings, those two to left (and in north end) glazed in 1930s, the half-timbered first floor having small-paned timber casements; timber stairs rise to door set in south end, a plain block of 1930 with tile cladding (to originally roughcast first floor) being set between this and the timber stairs that rise to the first-floor gallery on the south elevation. Block to north has hipped roof, timber casements to first floor restaurant replacing original folding screens, with panelled aprons to east elevation and three bays to north set above dentilled eaves; timber balustrade to platform and stairs projecting to east of this block, the right-hand (north elevation having corrugated iron cladding and steel casements to ground floor).

INTERIOR: main block has panelled doors set in moulded architraves, some original chimneypieces and a dog-leg stair with stick balusters and ball finials to newels; first-floor room to right has partition inserted for Barnes Wallis's office. Exposed steel-framed roof in 1930 restaurant to rear and exposed steel frame in 1914 restaurant to right (north)..

HISTORY: the Clubhouse was the principal building on the Brooklands site, completed just before it was opened in 1907 and sited adjacent to the Finishing Straight. It fulfilled both social and practical functions and presents a sequence of alterations and additions that relate to this site's period of national and international importance. The Clubhouse incorporated an area known as the Weighing Block, with equipment for weighing competitors' vehicles, accommodation for the Clerk of the Course and other staff, changing rooms and a press stand. It comprises a neo-Georgian block, pedimented to front and rear with a viewing gallery along one side and an observation tower surmounting the roof. As the clubhouse for the socially prestigious Brooklands Automobile Racing Club, for whom it was extended just before the First World War, it was extensively remodelled and enlarged in 1930 and throughout the 1930s. Immediately to the south of the clubhouse was the Paddock containing a series of workshops and garages, petrol pagodas, tyre storage areas, a grandstand and a press hut. Amongst those with premises in this area were many of the most important names in early British motor racing including Malcolm Campbell, holder at various times of the World Land Speed record, English Racing Automobiles (ERA), LBB Motors (who were agents for ERA) and R.R Jackson.

In January 1946 the Clubhouse was sold to Vickers-Armstrongs and became the offices and laboratories of the firm's post-war Research and Development. This was headed by Sir Barnes Wallis, inventor of the war-time Dambusters' 'bouncing bomb' and of the geodetic structural design featured in the Wellington bomber and other Vickers aircraft. After Wallis retired in 1971, the Clubhouse was occupied by the British Aircraft Corporation/ British Aerospace Film Unit for another decade and then was sold to Gallaher Ltd in 1983 and later leased to Brooklands Museum.

The world's first purpose- built motor racing track at Brooklands employed state of the art technology and was described as one of the seven wonders of the modern world. Lying between Weybridge and Byfleet, the race circuit was constructed in 1907 on `Brooklands', the private estate of the Hugh Locke King. Financed and built entirely on his own initiative, Locke-King intended the new facility to be a showcase for British motor engineering and motor sport. Enclosing an area of 300 acres, the outer circuit was constructed in just nine months by a workforce of 1500 men at a cost of £150,000. In 1937 in response to new circuits at Donington Park and Crystal Palace a road-racing circuit designed by Sir Malcolm Campbell was opened at Brooklands. In addition to including completely new sections of track, the so-called `Campbell Circuit' utilized portions of the existing circuit and a ferro-concrete bridge over the River Wey built prior to 1934 to allow Vickers aircraft to be towed from their factory to the east of the circuit on to the aerodrome. A series of concrete pits were constructed alongside the section of the new circuit (the `New Finishing Straight') running parallel with the old Finishing Straight.

The great names of the inter-war British motor industry, such as Austin, Vauxhall, Norton and Triumph owed much of their success to the availability of the Brooklands track, which proved itself as a valuable testing ground for engine development, tyre safety and streamlining. In the 32 years that it was in use the Brooklands circuit achieved both a number of firsts and was the venue for a series of successful world record attempts. In 1907 S.F Edge broke the 24 hour endurance record by covering a distance of 1581 miles; in 1913 Percy Lambert became the first person to drive 100 miles in one hour; and in 1909 the World Land Speed record was broken at Brooklands, the first of three occasions. In 1926 the circuit also provided the venue for Britain's first Grand Prix.

In addition to its importance to motor racing, the site was also of great importance in the realm of aviation. In 1907 both Claude Moore Brabazon and Alliott Verdon Roe attempted to fly aeroplanes of their own design at Brooklands without success. On June 8th 1908, however, another attempt by Roe was more successful and he became the first Briton ever to fly a British-designed aeroplane. Thereafter the new aerodrome within the circuit rapidly became the focal point for the country's burgeoning aviation industry, including aircraft production, flying training and passenger flights. Popular enthusiasm for this new technology, and especially for private manufacturers, was greatly encouraged by the press (especially The Daily Mail) and found its voice in the Aero Club, the Aeronautical Society and specialist journals such as Flight (1909) and The Aeroplane (1911): all these promoted the use of flying for both military and civilian purposes. Throughout this period, air shows brought thousands of members of the public to sites thoughout Europe, invariably joined by military observers. In 1909 Britain's first public flying demonstration was held at the aerodrome and in 1910 Lane's Flying School opened, followed in 1911 by Vickers' Flying School. In the same year the first passenger flight ticket was sold at Brooklands by Keith Prowse and Co, Mrs Hilda Hewlett became the first British woman to gain a pilot's licence, and the airfield was the starting and finishing point for the Daily Mail Circuit of Britain race. Initially the only access to the aerodrome was via the so-called `Aerodrome Road' a macadam road which led southwards from the motor racing paddock, crossed the River Wey alongside the Byfleet Banking bridge and skirted the foot of the banking, although in later years additional access was provided by a footbridge which crossed the banking at Byfleet.

Motor racing ceased at Brooklands in 1939 and at the start of World War II both the airfield and circuit were requisitioned for use by the Vickers and Hawker aircraft companies, most of the Hurricanes that brought victory in the Battle of Britain being built at Brooklands. Formerly lying immediately outside the track to the east, the Vickers factory was rapidly expanded, with buildings erected across the area of the outer circuit from a point north of the Byfleet Banking bridge to the southern half of the Finishing Straight. In addition wartime hangars were erected on the Members' Banking, the northern end of the Finishing Straight and the Railway Straight. On 4th September 1940, during the Battle of Britain, the Vickers factory was badly bombed by the Luftwaffe causing severe casualties amongst the workforce. The anti-aircraft guns at Brooklands were in action on 33 occasions from the time of the raid up until May 1941 and shot down two aircraft. Some time between early 1941 and the start of 1942 the defences at Brooklands were further enhanced by the construction of a reinforced concrete tower (Scheduled Ancient Monument) on the Members' Hill. The tower, split into two parts, mounted a 40mm Bofors gun and its predictor gear and was intended to provide a clear field of fire against low-flying raiders. Additional provision for the protection of the Vickers workforce was made with the construction of brick and concrete lined air raid shelters cut beneath the foot of Members' Hill.