A Grade I Listed Building in Westerham, Kent 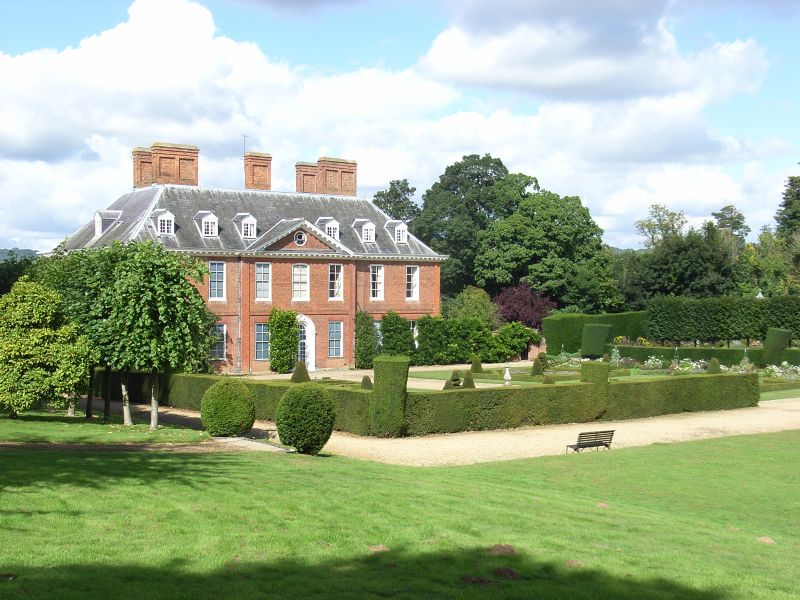 I
Built in 1681 by Sir Nicholas Crisp, a wealthy Guinea merchant. In the early
C18 it was acquired by John Warde, the ancestor of the present owners.
Squerryes Court is one of the finest examples of a Renaissance manor house and
stands in landscaped park with ornamental lake in front and gazebo on summit
of hill opposite. The estate stretches over a wide area to the south of Westerham
and includes a number of farmhouses etc, listed elsewhere.
Squerryes Court is a rectangular building with a typical Queen Anne type of
red brick elevation. 2 storeys, projecting moulded cornice with modillions,
steep hip slate roof with pedimented gable end dormers. Symmetrical elevation
with centre pedimented projection and C19 projecting stone porch with columns
and entablature. C19 sash windows in exposed moulded frames with vertical and
horizontal sash bars. Flat arches over windows of rubbed red headers. End
brick pilasters at corners. Stone plinth and brick band. Dormers with square
paned casements. Circular window in centre of pediment. Inside, original plan
much altered and staircase removed in mid C19 to form large entrance hall with
Roman Doric screen. Some original dado panelling and enriched doors and windows;
also some plaster cornices and original fireplace surrounds.
Historic Associations. The Warde family have owned Squerryes for the last 2
centuries and one of them, John Warde, was famous as the "Father of Fox Hunting".
The house contains a valuable collection of paintings.