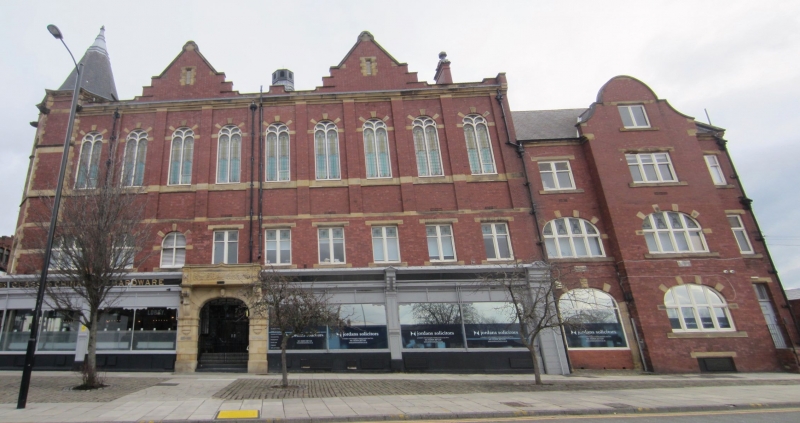 Shops, offices and meeting hall. 1901. Red brick with sandstone
dressings, and slate roofs. West front, three storeys plus attic. Nine bays with
3-bay office to right. Off-centre entrance with segment arched opening
and central curved keystone, plus stone brackets supporting a balcony.
Ornate iron gates and overthrow. Either side are two plate-glass shop
fronts, with pilasters between. Above to the right six, 2-light sashes
and to the left two 2-light and a single 3-light segment headed casements.
Above nine tall round-headed windows with wooden tracery and plain pilasters
between topped by a moulded cornice, and two partly stepped gables. The
roof is topped by the base of a former cupola. The 3-bay office to
the right has a projecting centre, with to the left a segment headed
carriage arch with plank doors, a 4-light segment headed casement and
beyond a plank door with overlight. Above a central 4-light
segment-headed windows with a similar 3-light window to the left, and a plain
sash to the right. Above a central triple sash, with a double sash
to the left and a single to the right. Above again a curved gable with
a double casement. The north-west corner has an octagonal tower topped
by a short spire. The north, front, in two sections.
To the right a 3-bay gabled section with two plate-glass shop fronts, and above a 2-light
segment-headed casement, flanked by 3-light similar windows. Then an
ornate stone plaque inscribed "UNITY HALL", with above a pair of
4-light pointed arc windows with wooden tracery, within a single segment
headed ogee arch. Above an elaborately moulded cornice and an ornate
gabled with a small 2-light window. To the left a projecting octagonal
turret with banded spire. The left section has two plate-glass shop fronts
and above four segment-headed arches the central two containing 3-light
casements, the outer two with pierced balconies and inner angled 2-light
segment-headed windows. Above two central double sashes with either side
pairs of angle sashes all with flat moulded heads. Deeply moulded cornice
and hipped roof, with iron finials and connecting iron ridge piece.
Interior has upper meeting hall with ornate wooden roof now obscured
by a false ceiling.