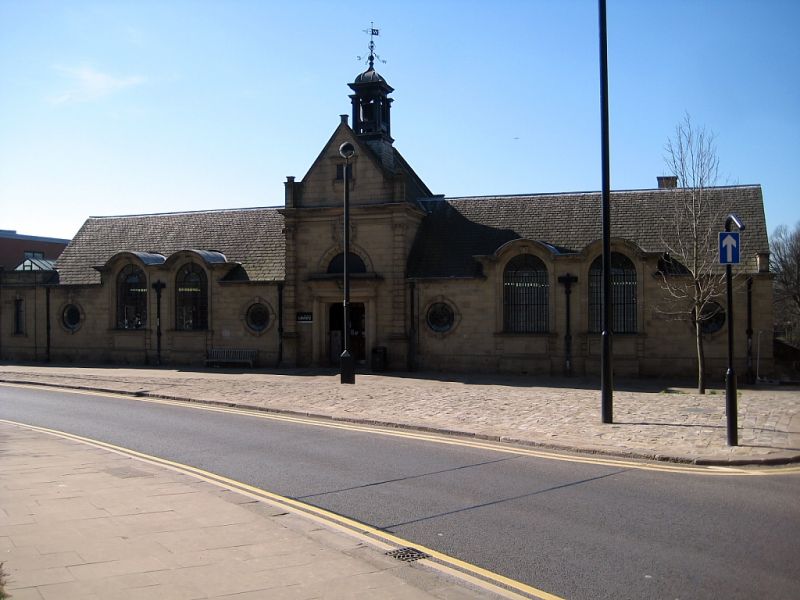 The following shall be added:

Library. 1905. In the Neo-Baroque style. Ashlar with slate roofs. Plinth and
moulded eaves. East front, single storey, with taller gabled entrance tower.
Central doorway with Ionic half-columned surround supporting entablature and
decorated hood. Above a large semi-circular fanlight in a concave rusticated
surround with shield above. The tower is articulated with tall rusticated Ionic
pilasters, on bases, supporting an entablature with pulvinated frieze. Coped
gable above has a small 2 light mullion window with hood mould. The roof of
this tower is topped by a wooden cupola with leaded ogee cap and an ornate iron
weathervane. The flanking wings each have 2 large round headed windows which
project through the eaves and are topped with round hoods. The concave moulded
window surround have decorated keystones, with below raised panels over rusti-
cated bases. Between each pair of windows, a single down pipe with an ornate
rainwater head inscribed '1905'. Either side are single circular windows with
moulded surrounds and 4 keystones each. To the right a 3 bay addition, with a
central round headed doorway with moulded surround and keystone, either side are
single narrow windows also with moulded surrounds and keystones. Interior: has
central domed entrance hall, with 3 large rooms off, each with a shallow arched,
moulded plaster ceiling. Built with the assistance of -funds provided by the
Carnegie Foundation.