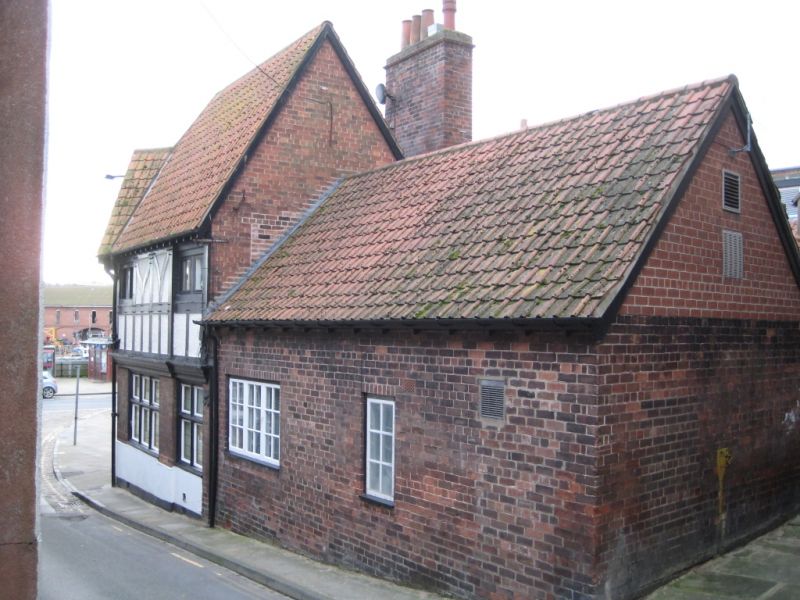 EXTERIOR
Medieval timber framing:
This is attached to the left side of the later public house, viewable from a narrow private alleyway. It includes six surviving posts embedded in the later wall, four of which support a jetty plate with joists and jetty bressumer above, with downward sloping braces, posts and a wall plate at first floor level. The front corner posts are heavily carved with figures and incised writing that has been the subject of academic research (see sources below).

Public house:
This has a complex roof of gables and cross wings with tall diagonally set chimney stacks. The section dated to 1898 has a pair of gables facing the harbour front with deeply overhanging verges and reasonably convincing mock timber framing. The first floor windows are unusual, featuring an outward bowed central light supported by a timber bracket. The ground floor to the front is almost entirely glazed, the first floor supported by mullions. The later extension to the right has less convincing mock timber framing to the first floor and a splayed gable that has a flush verge which is historically inappropriate. The ground floor is brick with a tall stuccoed plinth and has a broad doorway with a stone surround that has been blocked and converted into a window.

HISTORY
The original timber framed house is believed to have been an H plan with jettied gabled wings facing the street. Academic research suggests that this house dated to the late C15 or early C16, the timber framing (particularly the prominent curved braces) being similar to buildings in York dated to c.1500. The design of the carvings appears to be derived from prints produced by a German engraver who signed himself "bxg" and which were in circulation and in use by woodcarvers from the 1470s, some being redrawn by Hans Schaufelein in the 1520s. The medieval house is believed to have survived intact until c.1725 when a new front was added to the centre and west wing, at which time the building served as the Post House. From c.1830 this part of the house was a public house, and the eastern part refronted and used as a shop. In 1898-9 the centre and west wing were rebuilt by the local architect Frank Tugwell, incorporating the surviving timbers from the original house, and in c.1920 the east wing was rebuilt and incorporated into the public house.

REASONS FOR DESIGNATION
The Newcastle Packet Inn is designated at grade II for the following principal reasons:
* Principally for the survival of medieval timber framing, particularly the carved timbers which are nationally rare surviving features, with the research by Pacey highlighting their historical interest.
* Although the public house designed by Tugwell could have taken better advantage of the medieval timber framing, his design is a good example of late Victorian mock Tudor architecture.
* Tugwell's design incorporating the unusual first floor windows and diagonally set chimneys displays inventiveness and although the 1920s extension has less convincing half timbering, the differences add a patina of age by suggesting that the building has evolved, adding to its overall architectural impact.