The Haunch of Venison 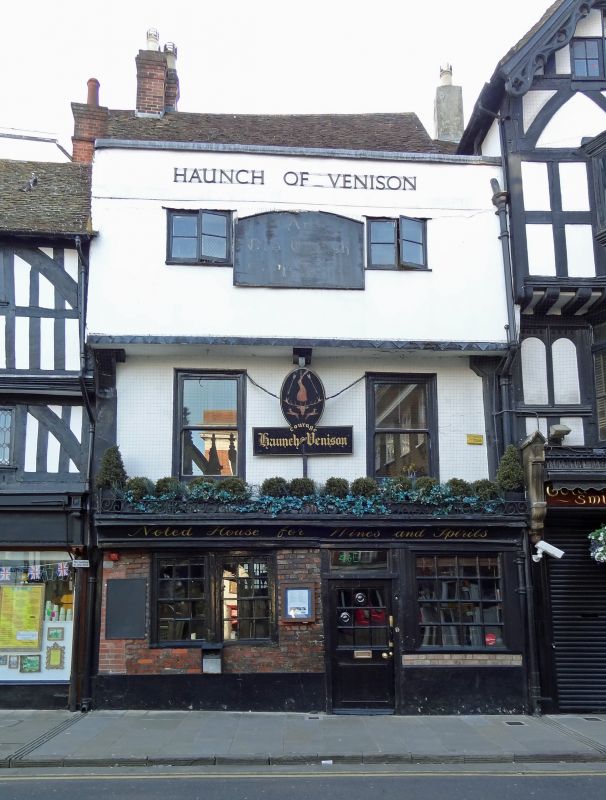 Entry Name: The Haunch of Venison

A house, now public house, in a row, dating largely from the mid-C15 with C18 alterations.

A house, now public house, in a row, dating largely from the mid-C15, with C18 alterations.

PLAN
Orientated north-south. Roughly square floor plan, entrance into a front bar with a further room and stair up steps to the rear.

EXTERIOR
The building is of two bays and three storeys. The main elevation, to the east, dates largely from the C18 remodelling; high plinth and brick to the ground floor, where the jetty has been underbuilt, and stucco above, with an overhang to the second floor. The part-glazed panelled entrance door is just right of centre, under a moulded cornice which runs the width of the building. To the left are paired six-over-six windows with thick glazing bars; to the right, a four-by-four multi-paned fixed window. The first floor has two one-over-one flush-framed horned sash windows; and the second floor, two two-light casements. Above is a plat band and parapet, with the steeply-pitched roof rising behind. The exposed portion of the return wall above the adjacent buildings is hung in plain clay tile. The C18 brick stacks have offsets to the tops. The rear elevation, to St Thomas’ churchyard, has overhangs to first and second floors, and is tile-hung. The fenestration is irregular, timber casements and sashes of various sizes. A large modern flue emerges from the first floor.

INTERIOR
The entrance leads into the public bar, with a black-and-white quarry tiled floor, with a mixture of small-square panelling and matchboarding, and part of the timber frame exposed to the front, with heavy, jowled posts showing the extent of the original ground floor under the jetty, now underbuilt. The exposed joists are chamfered and have run-outs to the front. The wide fireplace has a chamfered and cranked bressumer with inbuilt mantelpiece on carved brackets, and late-C19 panelled overmantel with an inset carved panel depicting vines, grapes and a haunch of venison. The room has inbuilt bench seating with panelled fronts. To the right is the bar and serving area, and the tiny snug, formerly the ladies’ snug. The snug has half-height panelled walls with three pieces of bare benches attached. The panelled bar counter has a pewter top and there are early C20 bar back shelves on a mirrored back. On the bar bench dividing the snug from the serving area is a carved timber elevated arch with seven spirit taps, with inlaid brass decoration, and a brass plate inscribed 'Gravity fed spirit taps fitted by H Neale, Plumber, Salisbury' with gilt decoration and dated 1909'. The only route to move casks of beer into the cellar is from the public bar, and while firkins (9 gallon casks) can pass through the door to the left of the servery, larger barrels involve removing the shelf behind the counter and opening up the bar front. There are no pumps or dispensers on the counter; handpumps are affixed to the bar back-fitting which also incorporates drawers. On the bar back is a second set of eight spirit taps (one tap missing).

To the rear of the public bar, up a short flight of steps within the panelled passage, rising over the cellar below, is another small room. This has small-square C18 panelling, with an internal window to the public bar and exposed ceiling joists, and heavy-section chamfered beams. The south wall is entirely occupied by a large, inglenook fireplace with chamfered uprights (replaced) and the original cambered and chamfered timber bressumer. A bread oven, with a later timber door, is set within the inglenook. The passage terminates in a probably C16 plank door. To the right is the timber half-winder stair, alongside a two-panelled door to a small room, now lavatories.

The first floor has a principal room to the front, with chamfered beams and joists with run-out stops, jowled posts to the frame and curved braces. The walls are plastered above a mixture of panelling to dado height, with some carved fields, and some built-in bench seating. The fireplace has a Tudor-style timber surround, with some additional carved panels probably dating from the C17 and imported or reused. Doorways have moulded C18 surrounds. The exposed timber frame of the wall adjacent to 3 Minster Street (north) has clear carpenter’s marks. The doorway in the formerly external north wall, up two steps to allow for the change in floor level, gives access into the dining room created in the first-floor space of 3 Minster Street (listed separately). This room has exposed close-studded timber framing to internal and external walls, and is panelled to dado height, with built-in bench seating. The broad C16 fireplace, with a fireback of 1558, has a hollow-chamfered, two-centred-arched bressumer carried on corbelled-out stone uprights with moulded chamfers and high stops, and a shallow stone hearth. The ceiling is divided into compartments by slender mouldings, with foliate bosses at the junctions. The remaining areas of the Haunch of Venison are given over to accommodation. The two-bay roof has double-collared tie-beam trusses, with two tiers of purlins, and curved wind braces.

The building is understood to have originated in the mid-C15 as the Church House for the Church of St Thomas, the parish church of New Sarum (Listed Grade I), which stands to the rear, across St Thomas’ Square. A Haunch of Venison pub is mentioned from 1320, though the present building is clearly later, dating from the mid-C15. In the later C15 a house was built adjoining to the north, now 3-5 Minster Street. The front and rear elevations were remodelled in the C18, creating a parapet roof, adding sash windows, and underbuilding the ground-floor jetty to the front. In 1741, the adjacent house at 3-5 Minster Street was purchased by Samuel Fawconer, a hosier, who also owned the Haunch of Venison. Later, an opening was created at first-floor level between the two buildings, and this remains, with the first-floor room of 3 Minster Street used as a dining room for the Haunch of Venison. The interior layout, divided into small spaces, survives from at least the late C19. The bar back, spirit taps and hand pumps date from a refitting of 1909.

The Haunch of Venison pub, a building of the C15 with alterations in the C18 and pub fittings dating from about 1909, is listed at Grade II*, for the following principal reasons:

Architectural interest:
* the building is a substantial and well-preserved C15 timber-framed house, with C18 alterations;
* the building retains its traditional layout, divided into several separate drinking spaces, including a tiny ladies’ snug;
* the interior retains a suite of pub fittings of about 1909, including a rare and elaborate bank of spirit pumps, together with good C18 and C19 fittings including extensive panelling.

Historic interest:
* as an early house in the centre of Salisbury, which retains clear evidence of its evolution from a church house in the C15 to a public house, which was refurbished in about 1909.