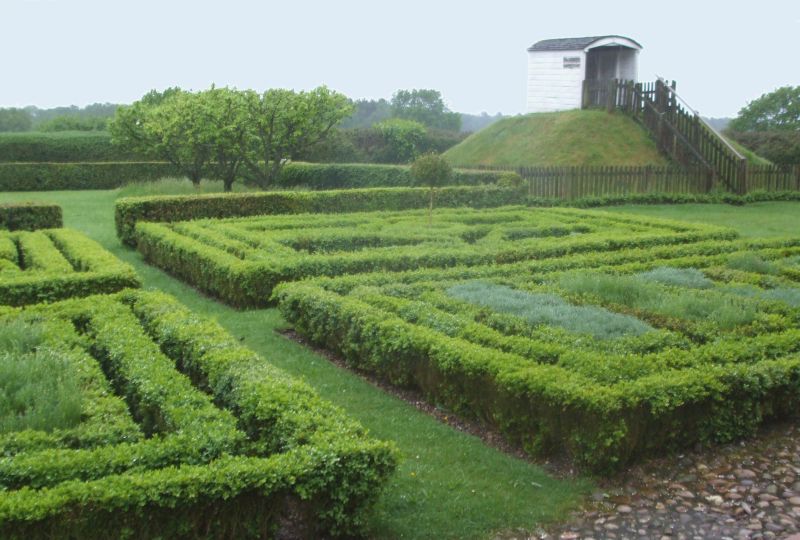 Farmhouse/hunting lodge. C16 farmhouse, remodelled as a hunting lodge
for John Giffard between c.1600 and c.1630, extended in C19. Hunting Lodge.
Timber framed (close studding) almost completely hidden behind cement
render, plain tiled roofs. 2 storeys with attic over cellar; 3 bays to
west, lower gabled cross wing to left is the western bay of the C16 farm-
house incorporated as a parlour to the lodge in late C18. The most prominent
feature is a large side stack in the centre of the west elevation with
offset to left and to right; the front of the stack is painted
with decorative features including false lattice casements. Irregular
fenestration, tall stair window to left above simple doorway, paired sashes
of c 1816 to ground floor right with Gothick leading; gable end to south,
slightly jettied to first floor and attic, has similar windows; angled
turret at south east corner (formerly for a staircase?) also with Gothick
sashes. Cross wing has C19 casements on each floor, wide 2 light segmental
head on ground floor, projecting entrance to right with gabled timber
lattice porch. To the rear the 2-storeyed C16 farmhouse projects to the
east for 3 bays (the western bay is incorporated as a parlour in the hunting
lodge); timber framed with square panelling and short tension braces,
irregular fenestration; there are traces of a timber framed firehood in
the east wall of the first bay from the west (where the farmhouse and
late C18 parlour meet). To the north-east is a large C19 brick range
with cross wing, painted black and white in imitation of timber framing.
The Interior of the hunting lodge was considerably altered during C19;
much of the panelling and decorative plastered friezes probably date to
this period. The principal room on the ground floor, known as the Dining
Room, was possibly the original hall; C18 Purbeck Marble fireplace (after
Batty Langley), its overmantel decorated with scenes of Charles II's
escape from Cromwell's men, inserted on west wall; the so-called Oratory in
the turret in the south-east corner is perhaps more likely to have been
a closet and the position of the original staircase. On the first floor
the right hand room has a small closet or garderobe to the left of the
fireplace with its Delft tile surround; the 'hiding-place' in the floor
of the closet is probably a C19 creation. The smaller room to the left,
also panelled, was formed by partitioning off part of the larger room.
The attic is also now divided into 2 rooms; at the top of the stairs,
which once continued to an upper garret, is the trap door to the secret
cavity where Charles II is said to have spent the night after his flight
from the Battle of Worcester in 1651; the inner room retains traces of
wall painting. The house is set in a reconstructed formal garden, which
retains a C17 viewing platform. The house is a Scheduled Ancient Monument
in Guardianship. Boscobel House and White Ladies Priory, H.M.S.O. Guide
Book (1965); J.J. West, Boscobel House, D.O.E. Guide Book (1981).