The Hall and Attached Stable Block

A Grade I Listed Building in Sudbury, Derbyshire 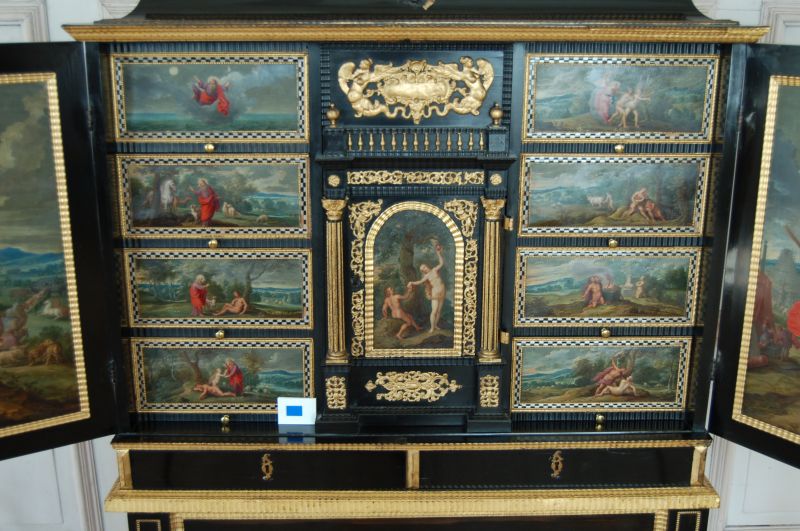 Country house and stable block now museum. c1660 - 1670 and 1876-83 by George
Devey. Red brick with vitrified brick diaper work. Sandstone quoins, flush to
ground floor, raised and chamfered to first floor. Moulded first floor band and
dentilled eaves cornice. Plain tile hipped roofs with two external brick stacks
to west and east sides, four ridge stacks to main part and six ridge stacks to west
wing. Stable block attached to north west has a brick ridge and a gable stack.
Balustraded parapet and central domed ashlar cupola with pilasters and pedimented
windows and a ball finial. E-plan. Two storeys and attics. Symmetrical elevations
to C17 part. North elevation of nine bays, 1-3-1-3-1. Central two storey porch with
six steps leading up to the door. Ashlar. Coupled columns and broken pediments
on two floors in a Baroque composition. The carving is by Sir William Wilson of
Leicester. The three bays on each side have to the ground floor paired 2-light
mullioned windows with two transoms flanked on each side by similar 3-light mullioned
and transomed windows. The first floor has similar 3-light windows either side of a
paired window with semi-circular and oval motifs. Projecting outer bays have paired
2-light windows with two transoms to each floor. The roof has nine pedimented roof
dormers the outer ones with segmental pediments. Irregular elevation to C19 east
wing to left in similar style. Descending in height, with square projecting end
pavilion and curved wall beyond linking to stable block. Four bay west elevation,
almost symmetrical, with similar fenestration. Symmetrical nine bay south elevation
of 1-3-1-3-1 bays. Bays one, five and nine project slightly. Centre bay has large
round-arched doorway with stone steps and a mullioned window above with semi-circular
and oval motifs. Segmental pediment with carving by Sir William Wilson. Three bays
on each side have central paired 2-light windows flanked on each side by 2-light
windows, all with two transoms. Outer bays have similar paired 2-light windows. Nine
roof dormers above as on the north front. C19 east wing, lower and set back to right.
Eight bays in similar style, with diaper work and mullioned and transomed windows.
Three projecting two storey square bays with paired cross windows to each floor and
cross windows in the return wall. Flight of balustraded stone steps in the angle
witch the main building. The stable block forms an L-range with the Service wing.
Dated 1664. Two storeys. East elevation has a broad round-headed quoined carriage
arch, with clock face above in ashlar surround. Cupola bell turret above. Similar
entrance to left and between them a doorway with stone surround flanked by 3-light
mullioned windows. To the right of the central arch a 2-light window, a single
light window, a doorway with stone surround and segmental pediment, a single light
window, a doorway with stone surround and a single light window. Two and three-light
windows above and a segmental arched opening. The interior of the house was begun
in 1670 and completed in 1691. Small alterations in C18 and C19 and restoration
1969-71 by John Fowler. The main entrance leads into a passage opening into the
great hall, the passage was divided from the hall by Salvin in c1850. Salvin
copied the elaborate rusticated doorway from the west end of the hall. Broad
bolection moulded chimneypiece with coved acanthus cornice, matching the cornice
to the room. Staircase hall, the Great Staircase (c1676) with white-painted
balustrade with luxuriantly carved foliage by Edward Pierce, one of the finest
staircases of its date in the country. Rich plaster ceiling by James Pettifer
(1675) with paintings by Laguerre (1691). Carved doorway to the Saloon attributed
to Thomas Young. The Saloon has a plaster ceiling by Bradbury and Pettifer (1675)
with a shallow dome painted by Laguerre. Carved panelling of 1678 by Edward Pierce,
altered c1736-41 to take the portraits and painted in the C19. Mid-Victorian
marble chimneypiece. The drawing room and library were made into one by Salvin
c1853 and re-converted to two in 1969. The drawing room has a ceiling by Bradbury
and Pettifer with an early C18 painting on canvas. Sumptuous naturalistic carved
overmantel by Grinling Gibbons. Library ceiling by Mansfield (1672) with coved
cornice similar to that in the hall. Mansfield might have only executed the
cornice, as the ceiling is in the style of Bradbury and Pettifer and may have been
added slightly later. Bookcases of c1700 with fluted pilasters and modillion
cornice. Upstairs the Queens Room with plasterwork by Mansfield and alabaster
chimneypiece and overmantel by Sir William Wilson (1670). Filling the full
length of the South front is the Long Gellery, a very conservative feature for its
date (completed in 1676). Magnificent ceiling by Robert Bradbury and plain
panelling painted in the C19. Upper Library fitted out c1840's. Attic rooms have
some plain panelling and the cupola has a circular staircase with barleysugar
balusters and a moulded plaster ceiling. Smaller rooms on the east side of the
house with plain raised and fielded panelling and various alterations by E. M. Barry
who worked on the house between 1869-72 and designed the Secondary Staircase of
robust proportions, with a ramped hand-rail. George Devey worked on the house
between c1872-80. His east wing has few interior features of special interest
and has been converted into a Museum of Childhood. Billiard room with early C20
plasterwork, incomplete, probably by W Romaine-Walker. The stable block with
massive double purlin roof is also part of the museum. Sources. Country Life
June 15, 22 and 29, 1935, articles by Christopher Hussey. Sudbur Hall Revisited
by John Cornforth, in Country Life June 10, 1971.