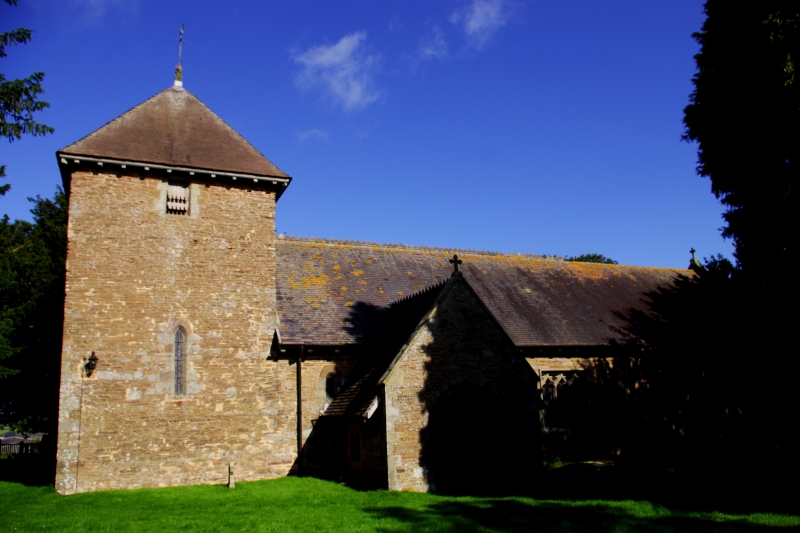 EXTERIOR: The chief characteristics of the church are the Transitional work of nave and tower, and the early-Decorated style chancel. Its broad low tower has pointed south window and round-headed west window. Later bell-stage openings are square-headed with louvres, under the oversailing eaves of a pyramid roof. The nave has late C12 south and north doorways. The Transitional south has nook shafts with scalloped and leaf capitals, and the round arch has a narrow-filleted roll mould and label with foliage stops. The door has 3 strap hinges with C-scrolls, in c1200 style but part restored. The north doorway, now blocked, is simpler with a continuous chamfer. North and south walls both have small round-headed windows at the west end (C19 on south side) and C19 3-light square-headed Tudor-Gothic windows towards the east end. The restored porch has a round-arched entrance with 2 orders of chamfer and paired cusped side windows. Chancel windows are all 2-light with cusped Y-tracery, in the style of c1300 but restored. On the south side there is also a smaller round-headed C12 window.

INTERIOR: The plain pointed tower arch of c1200 is on simple imposts. Tower windows have deep splays. The nave has a C19 trussed-rafter roof. There is no chancel arch. The 2-bay chancel roof, of 3 trusses, has tie beams with raking struts and windbraces. The westernmost truss is on brackets. A cusped piscina of c1300 has a corbelled basin incorporating a small head. A similar small head is over the inner side of the south door. Walls are plastered, except for the tower base. The tile floor is of 1885, of red, black and encaustic tiles.

PRINCIPAL FIXTURES: The font is a C19 plain round bowl and stem on a C12 base with roll moulding. The polygonal pulpit is C18. Seating belongs to the 1885 restoration: plain pews, with arcading and open quatrefoil frieze to the fronts of each block, and choir stalls with similar fronts. There are some rustic memorials of the C18 and C19, including to John Freeman (d 1802) and Anna Freeman (d 1802), which have steep pediments. A simple medieval armchair in the sanctuary was formerly reputed to be the chair used by St Augustine at a synod in 603 (see brass plaque).

HISTORY: A substantial church of c1200, including the west tower, in Transitional style. The chancel is c1300. The church was thoroughly restored in 1885 by Thomas Nicholson (1823-95), architect of Hereford who received many commissions within the diocese of Hereford.

REASONS FOR DESIGNATION:
The church of St James, Stanford Bishop, is listed Grade II* for the following principal reasons:
* Its overall form, with its squat, pyramid-capped tower and continuous roof ridge, is little altered and possesses strong local character.
* It contains substantial fabric and architectural detail of c1200 in the nave and tower, including the nave doorways.
* It has a well-restored chancel of c1300.