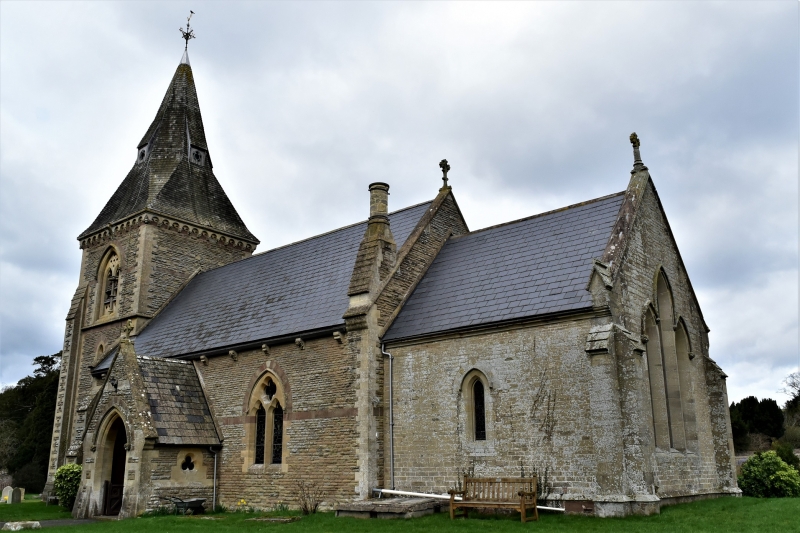 Parish church of 1863 by F.R. Kempson, incorporating some fittings from a previous church.

EXTERIOR: An Early-English style parish church of which the heavy 3-stage tower is prominent. It has clasping buttresses and semi-circular north-east turret that turns polygonal in the second stage. The west window is a single cusped light. Paired bell-stage windows have a central column and are superimposed by an arch with solid tympanum. An arcaded frieze at eaves level is below the splay-foot shingled spire. The nave has 2-light windows and corbel table to cast-iron rainwater goods. A stack on the east verge has a round shaft. The porch has a simple pointed entrance and the south nave doorway is similar. The chancel has a single-light south window and east window of 3 stepped lancets.

INTERIOR: The broad tower arch has a continuous chamfer. The chancel arch, a reconstruction of the arch in the old church, is Norman in style with semi-circular responds, scalloped capitals and stepped arch. The nave has a trussed rafter roof, the chancel a plastered barrel ceiling on corbelled shafts, and an elaborate cinquefoil piscina. Walls are plastered. Floors are C19 tiles, with wood floors beneath pews.

PRINCIPAL FIXTURES: A chancel screen is made up from parts of a C16 screen, and includes delicate openwork tracery and foliage cornice. The octagonal tapering tub font is medieval. Other fittings are 1863 or later. The round stone pulpit has rich diaper work. Benches are simple but the choir stalls have Gothic panels to ends and fronts. There are several stained glass windows, of different dates. They include the east window, showing the life of Christ, post 1886, and in the nave Christ preaching, post 1887, and the marriage at Cana by Kempe & Co, post 1929. There are several wall monuments of the late C18 and C19, including a sarcophagus to John Lilly (d 1825) in the nave and, in the chancel, an oval tablet with an awkward-looking mourning putto leaning on an urn, to Thomas Griffith (d 1800). In the tower base is a benefaction board of 1837.

HISTORY: Parish church built in 1863 by F.R. Kempson (1837/8-1923), whose father had been rector of the church. Kempson started his career in London but moved his practice to Hereford in 1861 and received many commissions in the county. Kempson reconstructed the chancel arch of the previous church, from which some of the fittings (screen, font, wall monuments) were reinstated in the new church.

REASONS FOR DESIGNATION:
The church of St Peter and St Paul, Stoke Lacy, is listed Grade II for the following principal reasons:
* It is a C19 Gothic-revival church retaining original character and detail.
* It retains its medieval font and parts of a medieval screen, and C19 detail including some good stained-glass windows.