The Parish Church of St Peter 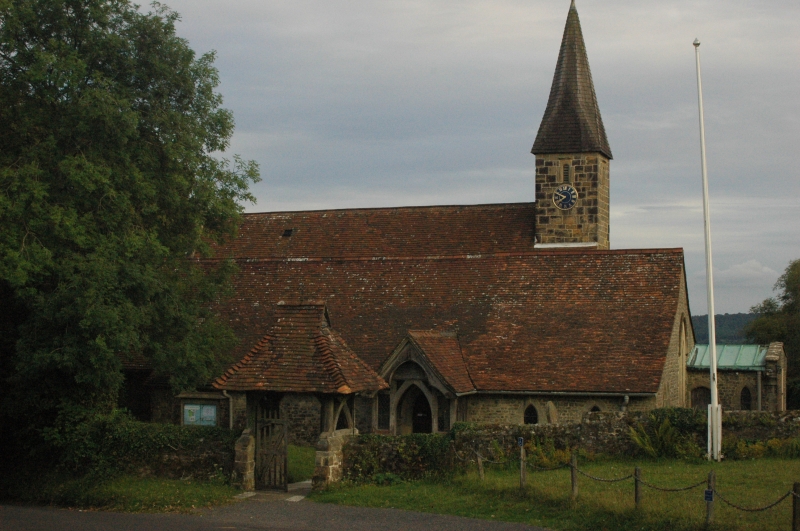 In the entry for;
SU 83 SE LINCHMERE LIPHOOK ROAD
2/4 The Parish Church of
St Peter
18.6.59
II*
The description shall be amended to read:-
Parish church. C11 3 bay nave (probably Pre-Conquest) 2 bay chancel and base of
tower are C12, the chancel enlarged and remodelled in C13 by the Canons of
Shulbrede Priory. Belfry and 2 pillars inside nave added in 1684. Extensively
restored in 1856 by Henry Woodyer who added the north aisle with stone arcading,
rebuilt the south porch and replaced the pinnacled capping to C18 tower with a
shingled spire. The outer north aisle and north porch were added by P M Johnston
in 1906 and a north west extension and vestry were added by Robert Pite in 1957.
Built of coursed and random Hythe sandstone rubble with tiled roofs. Lancet windows.
Chancel nave with double north aisle,north and south porches. West tower and west
vestry:nave has roof by Woodyer, a combination of curved brace and king post type
but the tie beam dated 1654 remains. Chancel has C13 trefoil-headed piscina.
Heavy oak screen, pulpits and pews by Woodyer. 5 bay stone arcade to north aisle
and 2 paired wooden octagonal columns to the extension of the north aisle are of
1906.

SU 83 SE LINCHMERE LIPHOOK ROAD
2/4 The Parish Church of St Peter
18.6.59
- II*
Parish Church. The church is medieval, very much restored, in fact largely rebuit,
by W Woodyer in 1856 and P M Johnston in 1906. The nave is C12, the chancel C13,
the tower 1654, the inner north aisle 1856, the outer north aisle and south porch
1906, the west end of the aisle extended and the west vestry added in 1957. The
interior of the church is largely Victorian in appearance but it is evident that
the south wall and much of the west end is C13. Open timber roof with kingpost.
Coursed and random rubble with tiled roofs. Chancel, nave with double north aisle,
north and south porches, tower at west end of nave and west vestry.