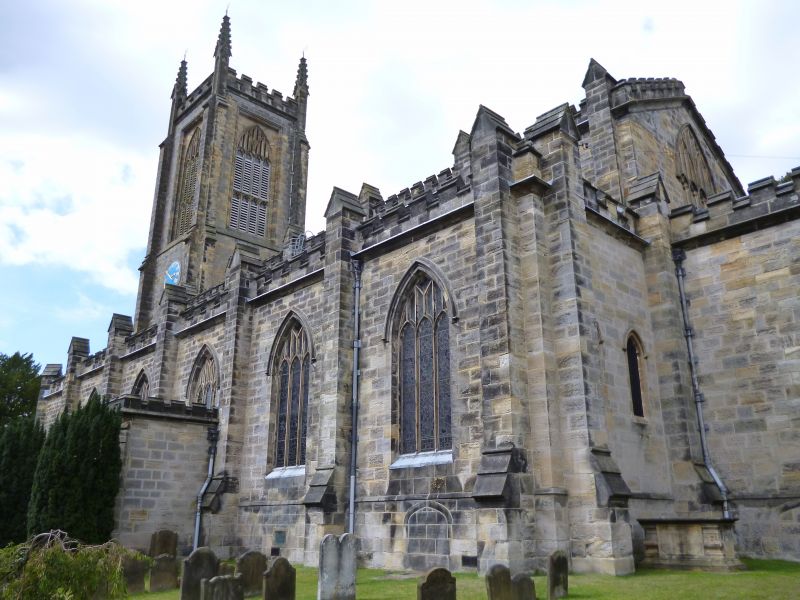 EXTERIOR: The church is an impressive, unified piece of late C18/very early C19 Gothic Revival church building in the Perpendicular style. The W tower is a landmark in the town and rises to a tall belfry stage with four-light transomed windows set within sunken panels. There is Y-tracery to the lower stage. The buttresses are of angle type and rise up to terminate in four large, crocketed pinnacles. The top of the tower is, like the rest of the constituent parts of the building, battlemented. The six bays of the nave and aisles are demarcated but buttresses which terminate above the parapets in gable heads. The buttresses on the aisles have very low off-sets. The tracery throughout has panelling and, in the three-light aisle windows, is cusped only to the main lights and the upper quatrefoil. In the E wall of the nave there is a blind traceried window. The clerestory of roundels is visible only from the interior.

INTERIOR: The S porch preserves its C18 flat plaster ceiling. In the body of the church the walls are mostly of bare stone, Wyatt's plaster covering having been removed at the 1874-6 restoration. The E wall of the nave and the sanctuary walls are painted white. The nave has five-bay arcades with very tall concave-sided octagonal piers with concave mouldings to the capitals and hollow-chambered arches. The 1874-6 roof has a crown post and tie-beam trusses with arched-braces carried on short stone shafts on moulded corbels. The aisles roofs are flat, the cross beams being carried on moulded corbels. There is a substantial two-bay painted hammerbeam roof, presumably of 1874-6, to the sanctuary with open tracery decoration to the spandrels and diagonal boarding behind the rafters. The chancel, now lengthened to the W, is defined by a screen.

PRINCIPAL FIXTURES: The most prominent feature is the rood screen of 1919 by Sir Arthur Blomfield and Sons and has a gabled central opening and rich tracery to each of the eight lights: the rood is by Sir Ninian Comper, 1961. Lower screens divide the eastern chapels from the nave and chancel. The W end singers' gallery has a canted panelled front on timber posts and has been adapted to take organ pipes. The late C19 polygonal pulpit has carved scenes under depressed ogee arches and rests on a stone stem with marble shafts. The font is octagonal, has traceried panels and was painted in the C20. The pyramidal cover is of 1908. The nave and aisle seating dates from the 1874-6 scheme and has shouldered ends with diagonal boarding. There is an early C20 crested timber reredos with large rustic carved figures of saints under gabled canopies. The mosaic floor of the sanctuary was made by Constance Kent during her detention for murder; the teenage Kent was the main suspect in the infamous Road Hill House murder case of 1860, and female felons in Woking Gaol were also responsible for the mosaic floor around the Duke of Wellington's tomb in St Paul's Cathedral at this same time. There are many monuments including cast-iron slabs of the C16 and C17, C16 brasses and C18 wall tablets. The stained glass includes the E window, and a window by Hardman in the S aisle, a c1900 memorial window by Kempe in the N aisle, and glass in the clerestory windows dating partly from the late C19 and partly 1989. In the N aisle a 1933 window commemorating Sussex churchman including figures of Keble, Dean Rose, Nathaniel Woodard, John Mason Neale (who is buried in the churchyard) and Walter Farquhar.

SUBSIDIARY FEATURES: Cast-iron gateway S of the porch (separately listed under LBS 430477). This has square-section openwork piers with zig-zag ornament, crowned with anthemia. The overthrow has a later lamp bracket attached. In the SE corner of the churchyard is the chest tomb of J M Neale, designed by G E Street. It is Gothic-style chest tomb with a floriated cross and a bible and chalice on the lid. A centenary plaque behind the chest tomb

HISTORY: This is a bold and relatively rare example of late C18 Gothic church-building by one of the best-known architects of the late C18/early C19. There was previously a medieval church on the site and it seems to have been principally of the C14 and C15. It was struck by lightning in 1772 and the tower collapsed in 1785 (this had already been rebuilt in 1684 following a lightning strike). A church brief in 1788 raised £516 towards rebuilding and work began the following year. Further funding was secured from loans and the church rates (apparently the last repayment was finally made in 1876). The tower was the last part to be completed in 1811-13: the architect responsible was J T Groves, no doubt largely working to Wyatt's design: after Groves¿s death the work was finished under H W and W Inwood. The major Victorian restoration took place in 1874-6 involving, most significantly, removal of the plaster from the walls, the introduction of open roofs, and a complete refurnishing in line with up-to-date taste.

The architects: James Wyatt (1746-1813) is one of the best-known architects of the late C18/early C19. Still in his twenties, he achieved fame with his design for the Pantheon in London, a early palace of entertainment. In 1776 he became surveyor to Westminster Abbey, in 1782 architect to the Board of Ordnance, and in 1796 surveyor-general and comptroller of the Office of Works. The royal favour to which Wyatt owed the last appointment was no doubt due to his having rebuilt Frogmore House for Queen Charlotte. His practice was extensive and diverse and he became especially famous for his work in Gothic. However, as a restorer and `improver' of cathedrals his activities were, even in his own day, controversial and involved sweeping changes that would never be countenanced today. He is nonetheless buried in Westminster Abbey.

John Thomas Groves (c1761-1811) designed a number of elegant late Georgian houses but his most original work is an unusual pierced obelisk at Garbally in Ireland.
William Inwood (c1771-1843) and his son Henry William Inwood (1794-1843) were well-known architects in early C19 London. Their most famous work is St Pancras New Church, designed in 1819 and drawing upon H W Inwood¿s studies of ancient architecture in Athens on which he was to publish a book in 1827. His career was brought to a premature end when he was lost at sea in March 1843 while sailing to Spain.

John Marshall Hooker was a London architect with an office in the Strand and was active 1868-81.

REASONS FOR DESIGNATION:
The church of St Swithun, East Grinstead, is designated at Grade II* for the following principal reasons:
* This is an outstanding example of a unified rebuilding in the Gothic Revival style in the late C18/early C19 to the designs of one of the leading architects of the day.
* The exterior remains as it was when completed while the character of the interior is largely the product of an extensive restoration in the 1870s.
* The fittings range from Tudor cast-iron memorials, to imposing C20 fixtures by leading church architects.