A Grade I Listed Building in King's Bromley, Staffordshire 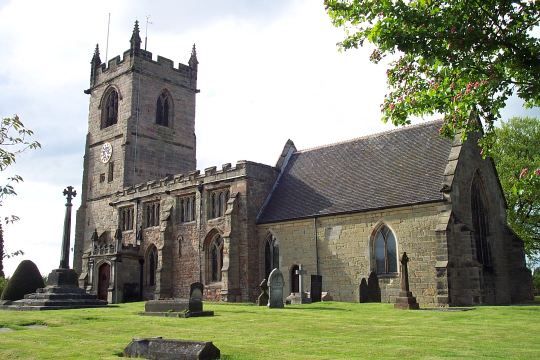 INTERIOR. Early C14 arcade with pointed arches of two chamfered orders and
octagonal columns with moulded capitals. C16 tall and pointed tower arch
and C14 wide and pointed chancel arch, both of two chamfered orders. Nearly
flat nave roof with moulded tie beams, ridge piece and rafters, probably
C15, restored 1927, Common-rafter roof with arch-braced collars over the
north aisle, possibly C14, but if so it has been interfered with for it now
blocks the clerestory windows. A pointed arch between the north aisle,
and vestry and organ chamber partly blocks the east window of the north aisle.
This comprised 3-lancet lights beneath a larger pointed arch. Remains of
a staircase between north aisle and chancel which led to the rood loft.
In the chancel a piscina and a small recess, both early C14, both with trefoiled
heads. C19 arch-braced collar roof over chancel. FITTINGS: Octagonal
stone font inscribed "WH / SM / 1664"; moulded basin and frieze of shields.
Oak pulpit inscribed "EC / RM / 1656" but much restored in the C19, octagonal
with door and top panels carved with grapes and vine leaves. Brass eagle
Lectern of 1903. Screen probably early C16 with tracery of intertwined
brances bearing leaves and human heads. C19 Perpendicular-style marble
reredos. Stained glass: Chancel north window of 1887 by Morris & Co.,
depicting St James & St. Paul. C18 glass in the vestry by Francis Eginton.
MONUMENTS: Samuel Newton, died 1751 and John Newton, died 1783; a pair
of near identical pedimented tablets with urns. Elizabeth Newton, died
1794, sarcophagus. B.o.E. p. 163.