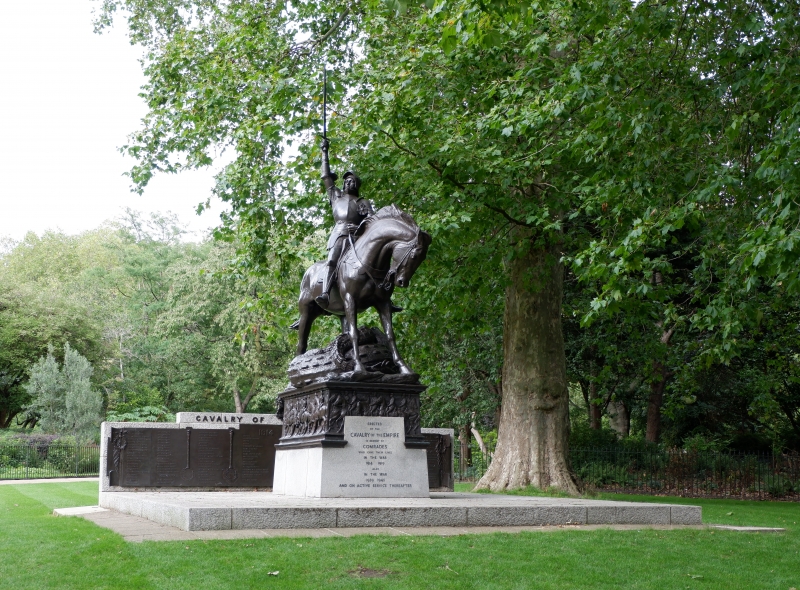 DESCRIPTION: the main group is an equestrian statue in bronze of a youthful St George in late-medieval armour, only slightly over life-size, with arm aloft and sword raised, mounted on a charger standing forcefully over a curled-up slain dragon with a broken lance driven into it. The statue stands on a rectangular base, whose upper part is also in bronze and carries a frieze depicting imperial cavalry, Indian and South African as well as British. The lower part of the base is of Portland stone, and carryies the inscription ERECTED / BY THE / CAVALRY OF THE EMPIRE / IN MEMORY OF / COMRADES / WHO GAVE THEIR LIVES / IN THE WAR / 1914 1919 / ALSO / IN THE WAR / 1939-1945 / AND ON ACTIVE SERVICE THEREAFTER

The statue and its plinth stands on a granite base, at the rear of which is a low granite screen wall carrying bronze plates listing the names of the Cavalry regiments engaged in the First World War, and also of the four Cavalry Field-Marshals - French, Haig, Allenby, and Robertson.

During the First World War the cavalry’s traditional role was undermined by the development of the aeroplane for scouting and reconnaissance, and by new weaponry such as the machine gun, poisoned gas and, from 1916, armoured tanks. Even so, during the First World war the cavalry arm of the British Expeditionary Force (BEF), which often served as foot soldiers in the trenches, suffered 19,051 casualties of whom 4,421 were fatalities; the ratio of officer deaths was greater than in the Infantry. In 1919, the future of the cavalry looked bleak.

In January 1920 officers wrote from the Cavalry Club to the Commissioner of Works proposing a memorial to regulars and yeomanry from Great Britain and the dominions. Proposals and counter-proposals over its location followed, but on 1 May 1923 The Times reported that work on the memorial was in hand, and that it would stand just inside Hyde Park at Stanhope Gate, with its back to Park Lane. The design would be allegorical and based on the patron saint of the cavalry (as well as of England), St George, together with a dragon, and include a bronze tablet listing the 150 Cavalry units which took part in the war.

On 3 March 1924 The Times state that the design of the memorial was being carried out by Captain Adrian Jones (1845-1938). St George would be modelled on a 1454 effigy of the Earl of Warwick, mounted on horseback holding an uplifted sword, and the horse on a C15 century engraving by Albrecht Dürer. The slain dragon beneath would signify that 'his season of tyranny is at an end'. Although there were disputes over the design and its equestrian veracity, it was eventually unveiled at Stanhope Gate on 21 May 1924 by Field Marshal The Earl of Ypres (formerly Sir John French) and the Prince of Wales.

In 1961, owing to the need to widen Park Lane, the Cavalry Memorial was moved 300 metres back towards Serpentine Road. At the same time the additional inscription commemorating Second World War casualties was added.

Captain Adrian Jones (1845–1938) was an army veterinary surgeon between 1867-90, setting up on retirement as a sculptor and painter specializing in animals, particularly horses. His best known work is the Quadringa, the sculpture on top of the Wellington Arch at Hyde Park Corner in London depicting Peace Descending on the Quadriga of War (1912). Other major works in London include in St James’s Park the Royal Marines National Memorial (1903) and in Whitehall the equestrian statue of the Duke of Cambridge (1907). Provincial examples include, in Exeter, Redvers Henry Buller (1905), in Bridgnorth (Shropshire) the town’s war memorial (1920) and in Gloucester the Royal Gloucestershire Hussars Memorial (1922).

The Cavalry Memorial, sculpted by Capt. Adrian Jones and unveiled in May 1924, is listed at Grade II* for the following principal reasons:
* Sculptural interest: a dramatic equestrian statue which demonstrates his assured handling of figurative and especially equestrian subjects;
* Sculptor: Adrian Jones was a leading sculptor responsible for several major First World War memorials;
* Historic interest: the memorial is a reflection on one renowned branch of the Army at a time of huge technological change;
* Symbolism: St George slaying the dragon was sometimes employed as the subject of war memorials. This example, however, is among the most ambitious and effective and reflects the enduring appeal of the chivalric image;
* Group value: the memorial stands within Hyde Park (Registered Grade I) and close to one of the world’s most important groups of war memorials, focussed on the Wellington Arch.