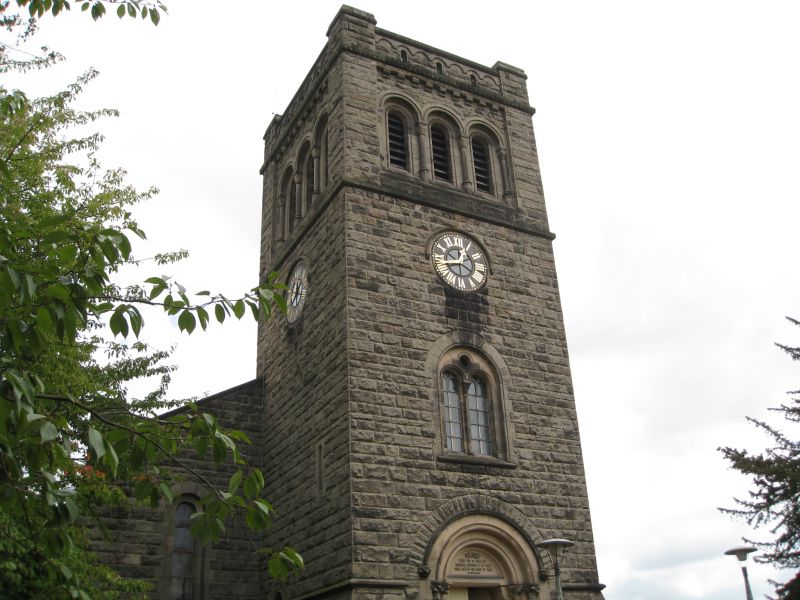 EXTERIOR: The church is in a consistent'Rundbogenstil', or neo-Norman, style. It has a battered plinth, and the windows are consistent in having recessed roll-moulded surrounds and, in nave and chancel, iron-frame 2-light Italianate glazing. In the unbuttressed 3-stage tower the lower stage is the porch. Its round-headed doorway has 2 orders of nook shafts with leaf capitals, roll-moulded arch, and tympanum with inscription from Matthew¿s Gospel. The second stage has a 2-light round-headed west window with plate tracery, above which are clock faces in circular frames in west, north and south walls. Triple round-headed belfry windows are recessed beneath a corbel table and incorporate shafts with cushion capitals. The parapet, still rock-faced, includes arcading with alternate blind and pierced arches. The 6-bay nave has angle buttresses in the south and north walls, of which the north-east also incorporates a vestry stack. The nave has single-light windows and a corbel table. Its roof has 2 gabled ventilators. The chancel has a richer Lombard frieze below the eaves, and smaller round-headed windows. The vestry, under a separate gabled roof, has a shoulder-headed doorway, round-headed windows similar to the remainder of the church but with margin-lit sashes.

INTERIOR: Walls are plastered and painted panels, below painted plaster vaults. A basilican plan is provided by arcades of cast-iron columns by Andrew Handyside of Derby, with shaft rings and moulded capitals. The columns support a nave tunnel vault with iron ribs and ceiling roses, and vaulted aisle bays. The apse is also plaster-vaulted with cast-iron ribs on iron wall shafts. The chancel arch is plain. The west wall has a blind round-headed recess.

PRINCIPAL FIXTURES: The neo-Norman theme is extended to the fittings. A west gallery has a blind arcaded front. The round font has a cable moulding around the top of the short round stem. Nave benches have square-headed ends with shouldered round-headed panels, and incorporate hat and glove hooks. (Some benches have been removed from the east end.) The communion rail, which has a semi-circular projection in the centre, has turned balusters. The polygonal pulpit is late C20 and in a late-medieval style. Two wall tablets are Gothic with crocketed gables, to Francis Wright (d 1873) and his brother.

SUBSIDIARY FEATURES: The entrance to the churchyard from Buxton Road comprises iron railings with fleur-de-lis finials, on a dwarf retaining wall. Between square-section gate piers, which have 4-way gables, are iron gates, which have similar detail to the railings. (A section of railings and retaining wall on the north side of the gate piers has been removed.) Inside the gates is diamond-pattern stone paving leading to stone steps and piers, similar to the gate piers, on which cast-iron lamp posts (with replaced lights) are mounted.

HISTORY: Built as a Free Church at the expense of Francis Wright of Osmaston, by Mr Bradford. Handysides, the ironmasters involved in the construction, were a leading foundry based in Derby whose works are found in India and Mexico, as well as in London's Olympia and the Albert Bridge. There are echoes of mid-C19 cast iron construction in French architecture here, a measure of the church's unusual character.

REASONS FOR DESIGNATION: The church of St John, Ashbourne, is designated at Grade II* for the following principal reasons:
* The church is especially notable for its remarkably consistent Rundbogenstil, extending to the interior and to the fittings.
* It is a good and scarce example of the use of internal iron framing in church architecture, provided by a local notable foundry.
* Its novelty of form reflects the independence of its foundation as a free church, founded by a single donor.
* The church, with its railings, gates, piers and steps, is prominently sited on the north side of the town centre and makes an important contribution to the historic townscape.