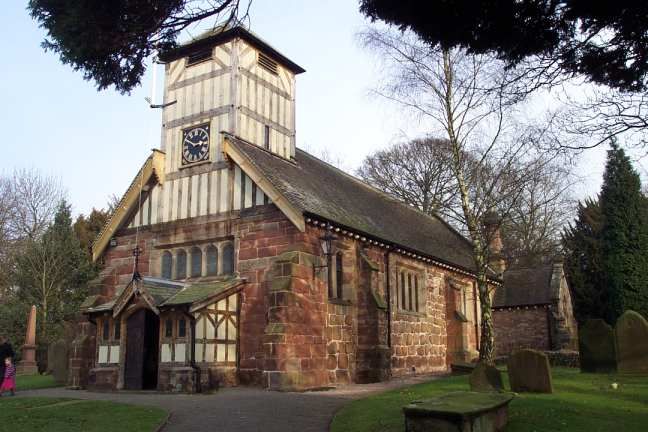 Church of England Parish: Whitmore St Mary and All Saints

Parish church. Largely C12 fabric, remodelled in C17, thoroughly
restored and slightly extended c.1880. Uncoursed sandstone rubble to
nave (C12) with coursed rubble and ashlar on chamfered plinth to C17
work and late C19 restoration and additions; timber framed west gable
end and belfry; late C19 machine tiled roof with graded slates to belfry
and porch roofs. Nave and chancel in one with belfry at west end; late
C19 west porch, south vestry and north organ chamber. Belfry: probably
originally c.1632 (see date on west door beneath) but completely restored
in late C19; close studded timber frame with cross rails carried down
to west gable; pyramidal roof and brass weathervane; clock on west
face commemorates Queen Victoria's Diamond Jubilee (1897); below, a
flat-headed late C17 window of 5 arched lights with hollow spandrels.
Nave and chancel: buttressed to corners and sides in 4 unequal bays
(south); 2-, 3- and 4-light late C17 mullioned windows on both sides,
probably originally with round-headed arches like those to west end,
but renewed in late C19 and given trefoil heads; East window of 5
lights in a restrained Decorated style (c.1880). Gabled vestry on
south with round-shafted chimney behind; gabled organ chamber to north
with a C17 blocked doorway immediately to east. Lean-to west porch
also late C19 but timber framed on sandstone plinth in imitation of the
earlier work above. Interior: west door with plain Tudor arch and
massive lintel bearing inscription "1632/ANN". Late C19 arch-braced
roof in 7 bays, the westernmost bay incorporating the belfry (approached
by a steep flight of stairs in south-west corner); chancel on higher
level but separated from nave only by a low stone screen (c.1880);the whole of the church has late C19 glazed tiles to the lower parts of the walls, further embellished with a mosaic reredos at the East end. The majority of the other fittings and furnishings are also late C19, including the pulpit, stained glass in chancel, the choir stalls and benches;plain cylindrical font on square chamfered plinth probably late C12.A board dated 1736, recording benefactions to the poor of the parish, hangs on the west wall while on the north and south walls are C18 funerary hatchments to various members of the Mainwaring family of nearby Whitmore Hall (q.v.). Monuments: in north-east corner an incised alabaster slab to Edward Mainwaring (died 1580) and his wife; on the wall above a finely carved alabaster and marble memorial to Elizabeth Mainwaring
(died 1674). The large churchyard is separated from the avenue of
trees, which leads to Whitmore Hall (q.v.), only by a ha-ha. B.O.E., -
p.308.