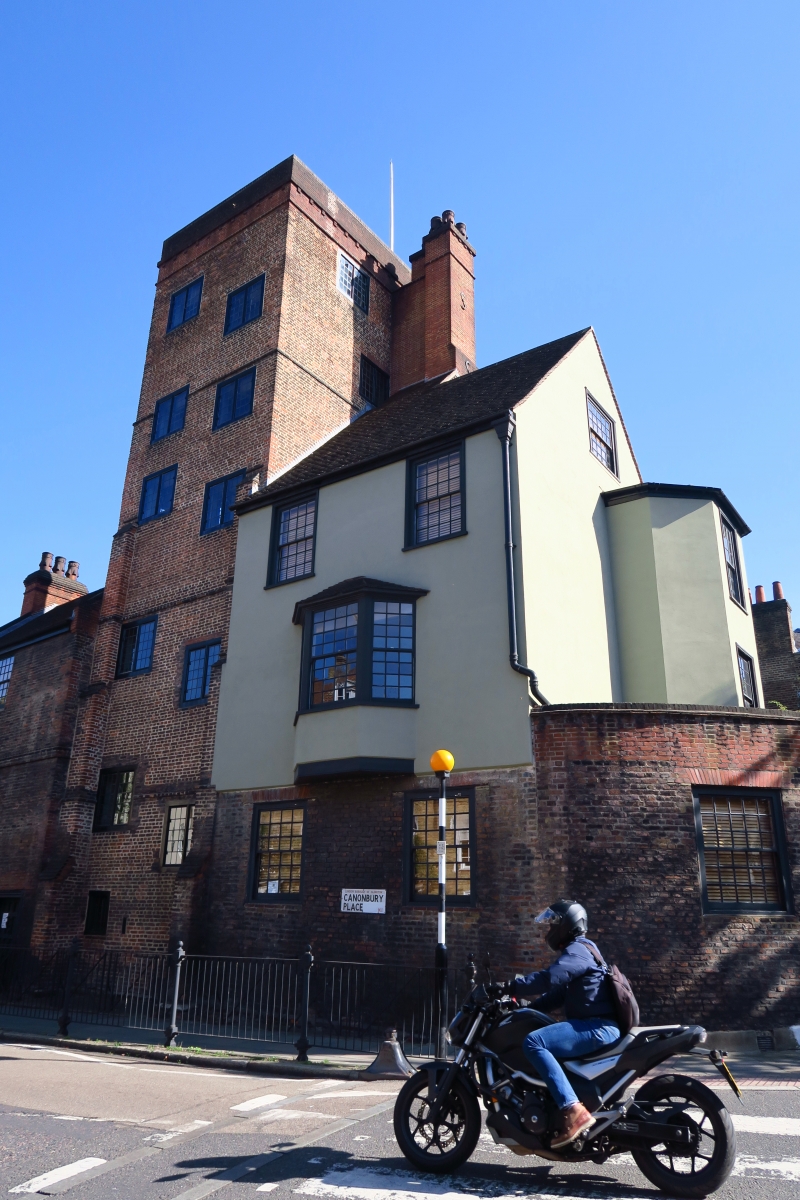 House, now offices. Premises of the Canonbury Tower Trust and
the Tavistock Repertory Company; originally part of a manor of
the Prior and Canons of St Bartholomew's, West Smithfield,
rebuilt in the early C16, and then again in the late C16 by
Sir John Spencer; the staircase tower is of c.1580 with the
top storey added later in the C16, three-storey wing east of
the tower added early C17, and the three-storey wing south of
the tower c.1580; various additions in the C17 and C18, and
extensive restoration in 1907-8 under the care of Major Dance,
the builders being Thurman and White. Brick, that of the
staircase tower set in English bond, the other wings covered
with plaster, tiled roofs. The staircase tower has one exposed
front to the north with wings to the other sides, three
storeys to the west, four storeys to the south and three
storeys to the east. The tower has four stages, with
buttresses on the north front rising to the third stage with
two offsets. Three-light window to ground floor, the stepped
windows to the staircase are casements in thick frames set
flush with the wall, presumably restored in 1907. Brick string
courses between stages and corbelled string above fourth stage
and below heightened parapet.
The windows to the wings are generally small-paned sashes set
flush or slightly proud of the wall. Gabled wing to the west
is brick to ground floor, plastered above; north wall has two
windows to ground floor, canted wooden bay to first floor and
two windows to upper floors; on the west front, the ground
floor projects in a curve, of late C18 or later, with two
windows of 1907 and parapet. A five-sided bay with flat roof
projects at the south-west corner of this wing with two
windows to the first and second floors. There is one window in
the gable of the west wing, and a chimneystack rising from it
by the south-west corner of the tower.
The cross-gabled south wing has windows to first and second
floor facing west with a central mullion and one window in the
gable; first- and second-floor windows facing south, set to
the left, and one window in the gable; the east face has steps
up to ground-floor flat-arched entrance with moulded doorcase
and overlight, windows to first and second floors with central
mullion and one window in the gable.
The east wing has a flat-arched entrance in Canonbury Place
with late C18 or early C19 moulded doorcase and ground floor
tripartite window under cambered arch; first floor has wooden
canted bay with brick band above and a window to second floor.
External stack to east with offsets and parapeted gable. A
single-storey wing linking Canonbury Tower to King Edward's
Hall abuts the east front; the south front has a garden door
under cambered arch, casement window to ground floor and
sashes to first and second floor.
INTERIOR: : The staircase consists of a timber-framed core,
square in plan, with handrail attached and cupboards with
moulded timber architraves formed in the void. At the fourth
floor the tower becomes open in plan with a balustrade and
side staircase, the balustrade formed in 1907 from earlier
timbers. The Spencer Room on the first floor, south wing:
panelled from floor to ceiling in oak, the east and west sides
being of two bays with a broad window bay, the south side
having an arrangement of bays corresponding to the north which
includes the entrance and fireplace. The bays are divided by
Ionic pilasters with cabled fluting, and a frieze of
meandering foliage; moulded cornice. The fireplace has a
flat-arched opening with a frieze of palmettes and a further
frieze of guilloche ornament over it and two bays above that
divided by pilasters with faceted ornament, framing panels
within panels under shell-moulds. Neo-Classical cast-iron
grates in rooms on the first floor to east and north-west.
The Compton Room on the second floor, south wing: the
panelling apparently reset so as to make an extra room of the
eastern bay. Panelling from floor to ceiling, pilasters
generally on plinths with grotesque ornaments, the body of the
columns decorated with strapwork, Corinthian capitals, many
mutilated, and a frieze of palmette forms with some heraldic
shields. Fireplace in north wall, with flat-arched opening and
C20 simple stone surround, flanked by pilasters without
plinths, above it bands of strapwork and fluting, a
mantelshelf decorated with trailing roses, and an overmantel
consisting of two panels with strapwork frames enclosing
figures of Faith and Hope. Neo-Classical cast-iron grate in
second-floor room in north-west wing.
Inscription room on fifth floor, with painted inscription
relating to kings and queens of England until Charles I; the
door of plank construction with wrought-iron hinges on the
inner side, and of frame-and-panel construction with moulded
frames on the outer side, the outer side re-used.
(Canonbury Tower. A brief guide: London; Greater London Sites
and Monuments Record; The Builder 29 February 1908: PP.253-4.;
Victoria County History: Middlesex, vol.8: London: 1985-:
P.75.).