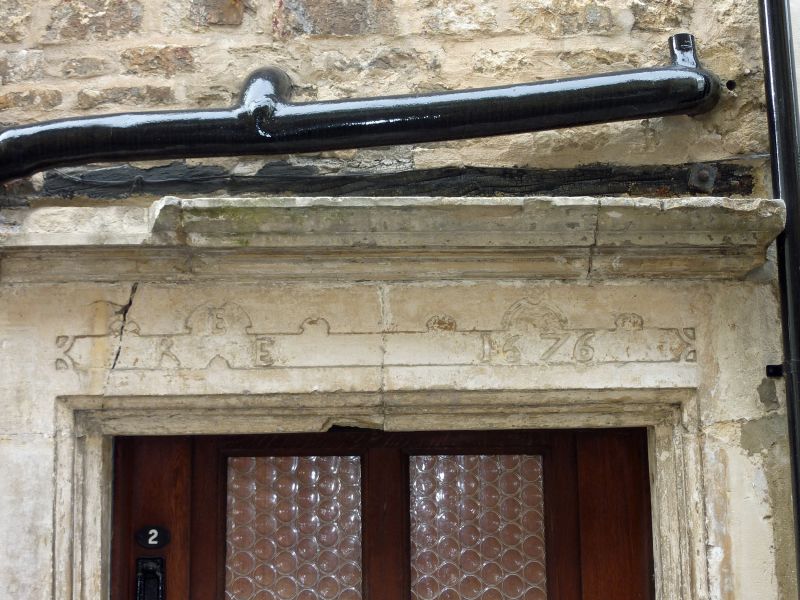 Includes: No.2 COXWELL STREET.
House, now hairdressing salon, club and flat. Dated 1676 to
rear (No.2 Coxwell Street), apparently one build but with
early C19 and later alterations to front (No.5 Dollar Street).
Coursed limestone rubble to sides and rear, stuccoed to left
side of No.5 Dollar Street, front to Dollar Street stucco over
timber framing; Welsh slate roof; C19 brick stack on gable to
left side rear. One gable to Dollar Street, 4 gables to left
side to Coxwell Street.
Front to Dollar Street is 2 storeys, attic and cellar;
one-window range. First floor has large C19 two-light window
with slender timber mullion and 9-pane glazing to each light;
similar blind window in gable above. C20 timber shopfront with
plate glass windows and recessed glazed door to ground floor.
Jetty over ground floor.
First floor has triple hoodmould over window and round-headed
niches to left and right with C19 female figure approximately
1.5m high in each niche, to left with trumpet, to right with
lyre. Gable has C19 carved bargeboards with carved finial at
apex.
Left side to Coxwell Street has two 3-light timber casements
with timber mullions in plain reveals with timber cills and
hoodmoulds to each of first and ground floors, small C20
window to first floor left, 2 blind windows with hoodmoulds in
gables to side of No.5 Dollar Street; rear part of left side
(No.2 Coxwell Street) has one 3-light ovolo-moulded stone
mullion window with leaded lights with hoodmould and one
similar 2-light blind window to first floor; similar 2-light
window with hoodmould in gable to right; ground floor has C19
sash window with hoodmould and moulded stone doorcase with
initials R E E and 1676 on frieze and moulded cornice over,
6-panel door with upper panels glazed. Single storey extension
to rear (left side of Coxwell Street elevation) has blocked
probable former shop window with exposed timber lintel with
moulded string over.
INTERIOR: ground floor front is shop with no access to other
parts of building, ground floor rear and upper floors to front
and rear have access via door to No.2 Coxwell Street. First
floor front has boxed-out beams; second floor landing has late
C17 balustrade with heavy turned balusters at head of
staircase; roof with extended collars and chamfered butt
purlins partially concealed, rear range has rafter roof with
single continuous purlin to each side with collar built into
gable wall at each end.