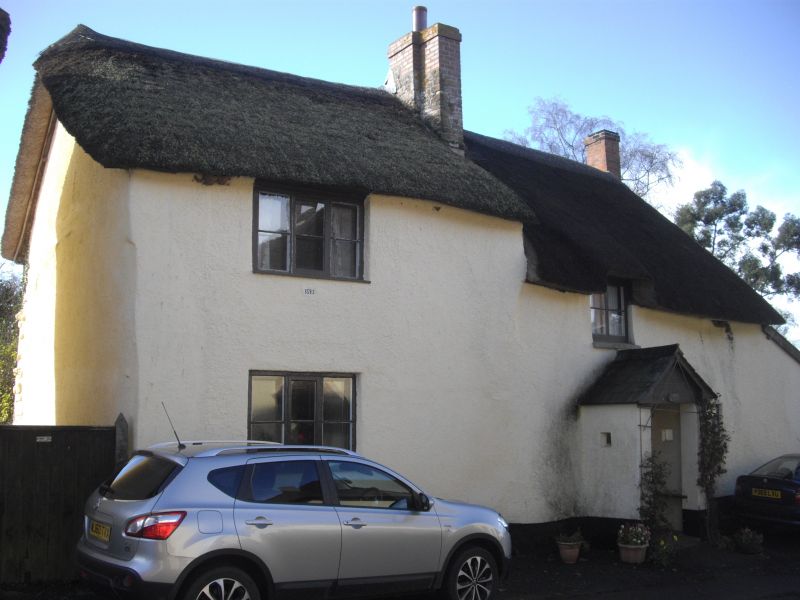 Estate house. Late medieval origins, remodelled in at least 2 phases, one phase
possibly 1593 (painted date on front elevation), partly rebuilt and raised at the
left (west) end possibly in the late C17; C18 or C19 lean-to addition at the right
end. Whitewashed rendered cob and stone; thatched roof of 2 heights with a plain
ridge, gabled at ends, lean-to addition slated; axial stack at the junction of the 2
roofs with a stone shaft repaired in brick at the top, right end stack to main range
with a modern brick shaft.
Plan: The present plan is a 2 room and through passage main range with a 1 room plan
single-storey lean-to addition at the right end. The left hand (east) room is
deeper, with a narrow service room and stair to the rear. A probably C19 or C20
axial passage at the front links the through passage to the lean-to kitchen. Complex
evolution. The house originated as a late medieval open hall, the medieval jointed
cruck roof structure, although largely concealed by plaster survives over the right
hand (west) end. It is not entirely clear which was the higher end of the medieval
house: a feature which may be an internal jetty survives in the right hand room with
a framed partition above it but the left hand room has a stack backing on to the
passage, suggesting that this may have been the higher end with an inserted hall
stack. It is possible that the deeper, left hand room has been entirely rebuilt in
the C17 as a parlour, and perhaps raised at the same time.
Exterior: 2 storeys. Asymmetrical 2 window front, the roof higher at the left end.
Gabled porch to the through passage to the left of the lower-roofed block with a
small porch window on the left return and internal benches, C19 plank front door.
Late C19 or C20 timber casements with glazing bars, one 3-light first floor casement,
one similar ground floor casement to the left hand block, eaves thatch eyebrowed over
one 2-light casement in the lower-roofed block to the right, one 3-light ground floor
casement. A rendered cob wall to the right (west) of the house is included in the
listing.
Interior: The left hand side of the through passage has the remains of a plank and
muntin screen, this has been cut off at the bottom but retains its head beam, re-
sited about 1 metre below the ceiling. A good C17 ovolo-moulded doorframe leads into
the left hand room which has a deeply-chamfered axial beam with step stops and an
open fireplace with a chamfered lintel, a bread oven and chamfered Beerstone jambs.
The right hand room has an axial beam and exposed joists with what may be an internal
jetty on the passage side. The fireplace is C20 and the stack may be a late
addition. On the first floor there is a framed partition which appears to line up
with the joist ends of the putative jetty. The right gable end wall of the main
range is of timber stud construction, the studs visible internally.
Roof: Side-pegged jointed cruck trusses survive over the right hand end of the
house, the left hand end timbers are probably C18 or C19. The apex of the jointed
cruck roof is plastered-over in the roofspace but smoke-blackening is visible where
the plaster has fallen off, and the timbers date from the open hall phase of the
house.
An attractively irregular house of medieval origins in an outstanding estate village
characterized by cob and thatch houses. One of 8 closely-spaced medieval houses in
the village.