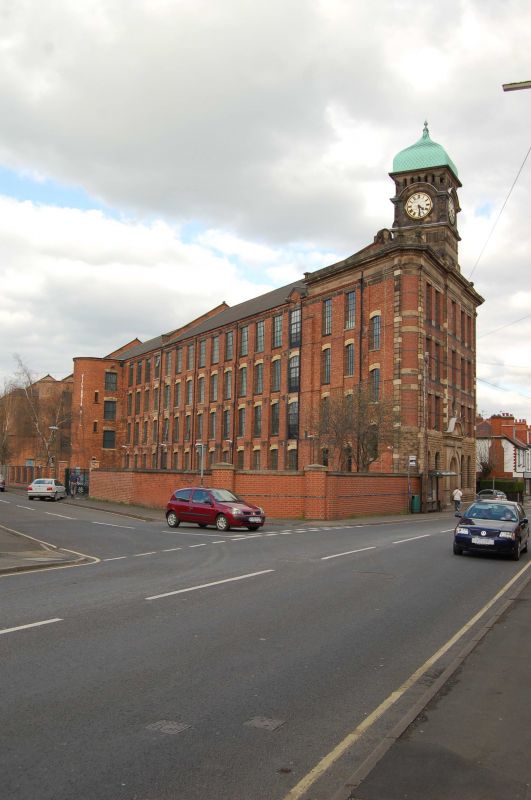 Tenement lace factory, now light industrial works. Erected
between 1888 and 1907, with partial rebuilding after a fire in
1902. Built by E Terah Hooley, a wealthy local industrialist,
and finished by Ernest Jardine. Red brick with blue and yellow
brick and stone dressings. Slate roofs with numerous stone
coped gables on moulded kneelers, plus moulded brick cornice.
Four storeys and 57 bays. Main elevation of Derby Road has
polished granite plinth, rock faced stone ground floor, red
brick with blue brick and stone bands to upper floors and a
moulded and dentilled stone cornice. Five bay facade with
advanced central bay topped by square tower. Ground floor has a
large semi-circular headed doorcase with raised keystone and a
pulvinated frieze and open swan-necked pediment over. Double
panelled doors with fanlight, below. To either side there are
pairs of semi-circular headed windows with rock faced stone
voussoirs, and flush stone bands at sill level. Above there are
pairs of iron casement windows under carved lintels with lozenge
design, to either side of round central window with large
keyblocks. Above again, five similar iron windows under carved
lintels with zig-zag design, and five more iron windows under
moulded lintels above. Central tower above has a deep base
inscribed '1906. JARDINE', with clockfaces to each side over,
flanked by nookshafts to each corner supporting a bracketed
cornice which curves up over the clockfaces. Ogival fish-scale
tiled copper roof to top of tower with vented frieze below.
East elevation has 57 segment headed iron casement windows below
yellow brick heads to ground, first and second floors, each with
stepped pilaster buttress to sides. Top floor has 57 similar
flat headed iron windows below moulded stone lintels. West
elevation is similar except for the addition of four full height
bow fronted staircase turrets with loading doors to all floors
to sides and small segment headed stair windows to front.
Interior has wooden floors supported on iron columns. Steam
engine with rope drive to all floors removed c1958. Chimney and
outside lavatories also demolished. Reputedly the largest lace
factory in the world.