A Grade I Listed Building in Draycott and Church Wilne, Derbyshire 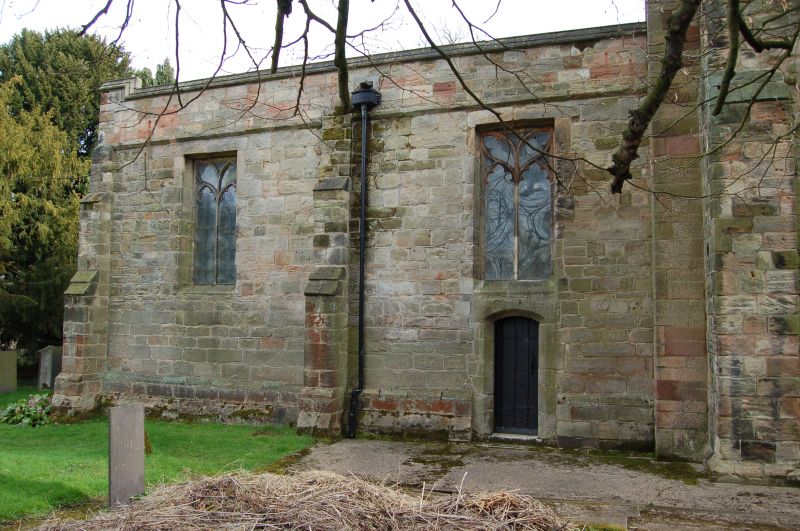 Tower is C13 except top
stage which is C15, each stage is slightly smaller than the one
below and against the south-west corner is a staircase tower
which tapers into the wall at the third stage. First stage has
set back buttresses to western corners and each side has a
central narrow lancet with similar above near the top of the
stage, also similar window to west side of the staircase. Above
there are narrow flat-headed windows to all three sides with
similar smaller one to south of the staircase and above again
there are deeply recessed pointed Y-tracery bell openings to all
sides. Projecting embattled parapets with ridgeback copings
over. North elevation has a chamfered lancet with hoodmould to
west and a low, pointed chamfered doorcase with continuous
hoodmould to east. Beyond to east are two 3-light flowing
traceried pointed windows with hoodmoulds and carved head
label stops. Between each opening and to either end there are
buttresses. Above there are four C15 flat headed 2-light
windows with cusped mouchettes to top, in deeply recessed
cavetto moulded surrounds. Embattled parapets above with
mutilated gargoyles. North elevation of chancel has two flat
headed 2-light C15 windows, larger but similar to the clerestory
windows, with stepped buttress between and also a chamfered
segment headed C19 doorcase below western window. East
elevation has stepped corner buttresses and a central 3-light
window with panel tracery set in deep cambered-headed surround.
Attached to south is the chapel of c1622 with central 3-light
intersecting tracery pointed east window with hoodmould and
embattled parapets above. South elevation of the chapel has two
3-light flat-headed windows with strange panel tracery, ie: ogee
headed lights with pierced spandrels in a semicircular top, and
between the windows and to east are stepped buttresses with
unusual moulded copings. Beyond to west, the south aisle has
two C13 3-light Y-tracery windows with hoodmoulds and buttresses
between, with a similar C19 window beyond the south porch.
South porch is C15 and has a lapped stone roof with
double-chamfered pointed doorcase with soffit on moulded corbels and
wide buttresses to each side. Inner door is a wide double
chamfered arch with hoodmoulds and inside the porch has
chamfered ribs on moulded corbels supporting the roof and small
2-light windows similar to clerestory ones, now blocked
externally by the buttresses. Above, the clerestory has five
flat-headed windows, of which western three look C15. Embattled
parapets above have several gargoyles.

INTERIOR: mostly of
1917-23, including four-bay south arcade of double-chamfered
arches on octagonal stone columns with moulded capitals and grey
stone banding. One pier is inscribed with date 1923. Chancel
arch is pointed with soffit moulding on corbels. Adjacent to
south is the remains of former staircase up to rood screen and a
squint through to chancel. Beyond again to south is the lower
double chamfered arch through to south chapel. The tower to
west end of nave has a small pointed doorcase from the nave.
Chancel has two C15 windows similar to north chancel windows,
through to chapel on south side. Also on south side is a
trefoil-headed piscina. North wall has inset C13 gravestone
and a wall memorial, formerly with brasses of c1513 to Hugh
Willoughby and his wife. On the floor is a C14 alabaster tomb
slab with incised figures and Latin inscription to edge, to Hugh
Willoughby, who died 1491. Altar, altar rails, choir stalls,
screens across the chancel arch and south chapel arch, the
pulpit and nave pews are all of c1923 by Currey and Thompson in
Arts and Crafts style. South aisle has late C19 pierced wooden
screen to west end. South chapel built by the Willoughbys in
1622, is lavishly decorated with a Flemish tiled floor, three
stained glass windows by Van Linges, also Flemish, and carved
coats of arms to centre of the cambered tie beams.

There are
also two fine monuments, one to Sir John and Lady Willoughby of
Risley who built the chapel, erected 1622 and the other of c1688
to Ann Grey. The earlier monument is of painted alabaster and
has a deep base with four kneeling figures on, over this is a
large semi-circular headed aedicule with a coffered ceiling,
double columns to either side with pulvinated frieze over topped
by steeple finials to corners and a large central achievement
encased in strapwork. Within the niche are the recumbent
figures of Sir John and his wife with a slate inscription, set
in a cartouche flanked by putti, behind them. The other wall
memorial has a slate plinth with fluted base and a central
marble inscription. Above there are weeping putti to either
side of a large urn which has the Grey family achievement
carved on the base, fluting to the base of the neck, a swagged
neck and a gadrooned top with flame finial.

The font is part
of a re-used saxon cross. Nave windows are mostly clear glass
with margin lights except for a late C19 east window to the
south aisle and the west window of the north elevation by H and
B Notty of 1938.