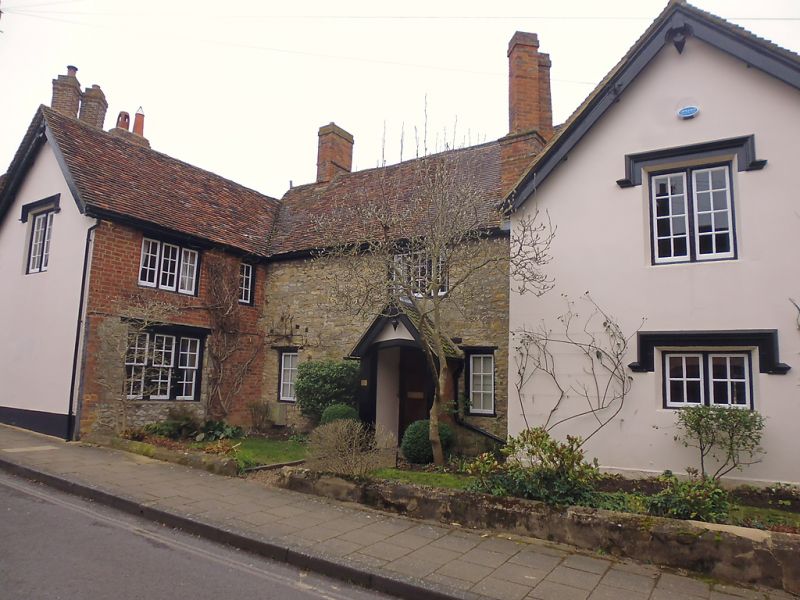 Vicarage. c1445, altered C17 and C19, when extended; other C20
alterations. Uncoursed limestone rubble, rendered to front
portion of right wing and to front of left wing, which is
partly of red brick, plain-tile roofs, brick ridge and lateral
stacks. Hall range flanked by cross wings.
2-storey, 3-window range. Hall range has central, double-leaf,
8-panel part-glazed doors with chamfered, Tudor-arched wood
surround, in gabled wood porch. 1-light windows to ground
floor, that to far left replacing door, and 3-light casement
window to 1st floor above door, all with wood lintels. Right
cross wing projects to front and has small 2-light casement to
ground floor and taller, 2-light casement to 1st floor, both
with hoodmoulds.
Similar window to 1st floor of left cross wing, which has been
extended to front and projects further out than right cross
wing. Right side of this wing is of red brick with tripartite
sash window to ground floor, 3-light casement to 1st floor
above and 1-light casement to 1st floor near hall range, all
with wood lintels. C19 two-storey gabled brick extension to
rear centre, facing garden.
INTERIOR: hall has chequered limestone paved floor with small
black stone or slate squares to intersections. Scoop
stop-chamfered spine beam. Fitted cupboard to back wall with
shaped shelves. Drawing room occupies ground floor of right
cross wing and has fine large, late C17 marble chimneypiece,
now painted, and with Greek wave pattern to eared fireplace
surround; frieze with swags of fruit and flowers either side
of large central relief panel with cherub's head to centre of
long scroll, and big, console brackets to shelf. Presented by
the Marquis of Buckingham around 1808 to Rev Henry Crowe,
believed to be of Buckingham marble and to have been
originally made for Stowe. Reused C17 panelling flanks C19
staircase.
Study in left cross wing has panelled wood chimneypiece and
cast-iron grate with Japanese-style ornament. Small bedroom to
front above drawing room, has bolection-moulded wood corner
chimneypiece and large veined grey marble, bolection-moulded
chimneypiece in larger bedroom, probably both late C17. Roof
of former open hall in attic of 2 bays with tie beams to
principals, short queen posts and collars. 1 tier of
wind-braced purlins, large original rafters and ridgepiece.
Wings have similar roofs.
Nicholas Dixon, prebendary of Sutton-cum-Buckingham, assented
to the institution and foundation of the Vicarage of
Buckingham in 1445, the church having previously been served
by chaplains. The present vicarage was probably built then, on
ground specially purchased for the purpose. It had an open
hall until it was sub-divided horizontally in the C17,
retaining a through-passage where the screens passage was.
(Crowe H Rev: Entry in Parish Register 10.6.1814 re
alterations to Vicarage; Hester CG Rev revised by Bell JW Rev:
Parish Church of Saints Peter and Paul, Buckingham:
Buckingham: 1990-: 12).