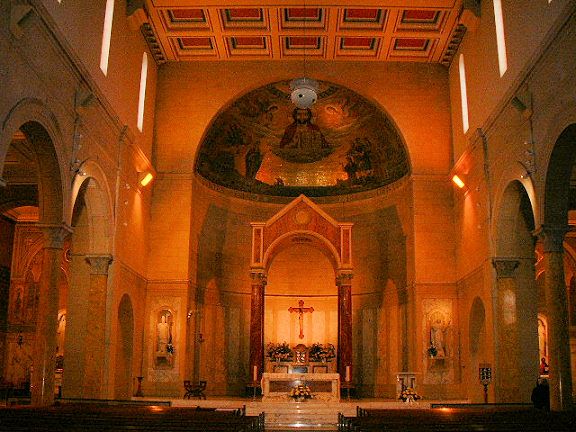 Roman Catholic church. 1936, by H.Greenhalgh. Red brick with white stone dressings, slate roof. Romanesque style. Nave with north and south aisles, west tower, apsidal sanctuary. Stepped symmetrical facade formed by square central tower with narrow set-back and slightly lower side pieces, and square 2-storey porches to the ends of the aisles, all with stone parapets and flat roots; a giant blank arch to the tower containing a shallow portal with round-headed doorway which has a mosaic tympanum, and 3 round-headed lancet windows in a white stone surround. The side-pieces have tall lancets; the porches have doorways similar to that in the centre, including the
tympanum, but generally simpler, and small round-headed windows above. The nave and aisles have round-headed lancets, and the apse is blind. Impressive interior in basilican form; aisle arcades of yellow marble with carved concave capitals and round-headed arches with panelled soffits; coffered ceiling; round-headed sanctuary arch, and apse with gilt and coloured mosaics.