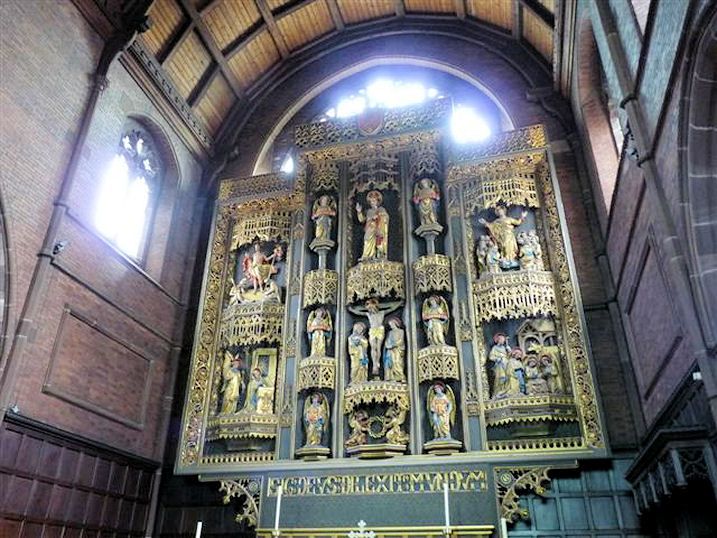 Church. 1896-1904, by Cecil Hardisty; dated 1896 on plaque at
east end. Glazed red brick with red sandstone dressings and
steeply pitched slate roof. Free late Gothic style with Arts
and Crafts features. Nave and full-height chancel, north aisle
to nave with mono-pitched roof, south aisle to both nave and
aisle with pitched roof concealed by parapet, west porch with
corner bellcote. String course stepped and carried round. The
west end has a 3-bay single-storey porch with narrow
buttresses flanking the centre finished as octagonal pinnacles
rising through a parapet which has a traceried open-work panel
in the centre, a segmental-headed doorway to the centre with a
lettered banner above, and in each outer bay a low depressed
arched window of 2 cusped lights with mouchette and dagger
tracery; above the porch, paired 3-light windows (concealed by
scaffold screens at time of survey); and a coped gable, the
left corner carried up to a stone bellcote with stone
chequer-board patterning below the opening. The aisles have
buttresses and large arched 3-light windows with cusped lights
and elaborate Arts-and-Crafts tracery, except that to the
south side of the chancel which has 2-light windows in the
side and a 4-light window in the east end, with emphatic
tracery. The east gable has a plaque with a central cross, and
Gothic lettering "Ad Gloriam Dei" above, "A. MDCC" to the left
and "CXCVI D" to the right, and "Jacobus Moorhouse
STP/Episcopus/ posuit " below; a large 7-light traceried
window, chequer-board patterning above this and a parapet with
traceried stone panels at the corners. Interior (as reported
24.04.87): 4-bay aisle arcades of octagonal columns without
capitals and tall pointed and chamfered arches; steps up to
3-bay chancel with south arcade and clerestory; low stone wall
between nave and chancel, incorporating pulpit; wooden barrel
roofs; west gallery; polygonal font with marble columns; fine
reredos and lectern by G.F.Bodley (from church of St Edward,
Holbeck, Leeds); organ case by Oldrid Scott (from church of St
Peter, Northampton).