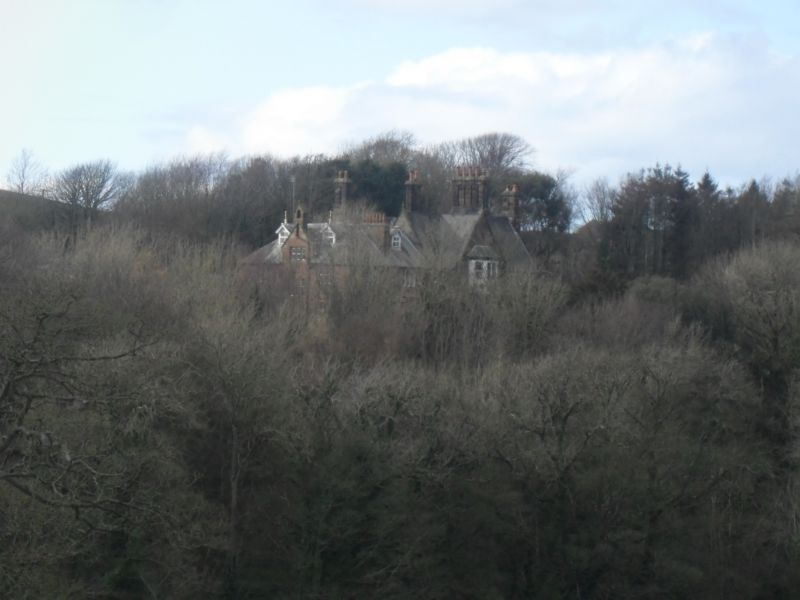 Large house. c1860. Probably by Edward Browning of Stamford
(archives). Altered and extended c1876 by Paley and Austin
(plan). For Edward Wadham agent to the Duke of Buccleuch.
Coursed sandstone on slate basement, ashlar limestone sills
and red sandstone dressings; the later work all in red
sandstone; graduated slate roofs.
2 storeys with half-basement, approx 4x4 bays in High
Victorian Gothic style; 3x2 bay addition set lower on south
side. Entrance front: ashlar plinth with moulded band; quoins;
diagonal buttress on left. 6-panelled door under arched stone
transom with ball-flowers; plain overlight; shield above with
BQ monogram in crowned Belt of the Garter; small sash over.
Doorway hoodmould becomes continuous string course, forms
annulets around fallpipes and rises to right over tall,
3-light stair window with transom, shouldered lights and
heraldic glass; relieving arch over. Boarded window beneath
the stair-window and another on its right below a tall sash;
all have quoined surrounds.
To left of door is a broad lateral stack with offsets and
twin, square flues under shared cap with ball-flowers. Above
the stair-window a gable with moulded copings and fleur-de-lys
finial; smaller gables to each side have kneelers with
gablets. Steeply pitched end gables, that on right with twin
flue stack as before.
Rear: battered half-basement walling; gabled left part
projects and has bay-window on 3 limestone brackets beneath
later, wooden bay-window. To right is a shallow bay-window
with ashlar roof; gabled half-dormer with animal-head gargoyle
to its left. 5-flue stack rises from valley.
Left return: 2 gables, that to left with external stack
pierced by pointed window; blank shield above. Buttressed
gable projecting on right has canted bay-window of 1:4:1
lights with shouldered heads; ashlar bay-window above is of
1876. Addition of 1876 is much plainer and has plain sashes in
chamfered, mullioned windows of 2 and 3 lights.
South side has 1-storey porch and gable with bellcote flanked
by roof dormers.
INTERIOR: stairhall in Gothic Revival style; patterned and
encoustic tile floor; staircase with balustrade of colonnettes
with cusped arches between, octagonal newels with finials.
Stained glass stair window with Buccleuch monogram and motto
as well as spiritually uplifting texts on diagonal banners;
panelled ceiling. Front-left room with pierced oak-leaf
cornice. Rear-left room with marble fireplace beneath a window
and pierced ivy-trail cornice. Rear room with panelled
ceiling.
Home of Edward Wadham, mineral agent to the Duke from c1856
and Mayor of Barrow 1878-1881. Became home for the elderly
c1947, disused at time of survey. Buccleuch archives contain
papers relating to the alteration and rebuilding of 'the villa
at Millwood' c1860, the year of Edward Wadham's marriage. An
undated illustration shows Millwood with an older house on the
site of the 1876 addition (Trescatheric); plans for the 1876
work survive.
(Buccleuch Archives: 1860-: BD/BUC/42 BUNDLE 2; Trescatheric
B: Barrow in Furness in Old Picture Postcards: Netherlands:
1982-: 111; Building Plans Register: 1876-: NO.1089).