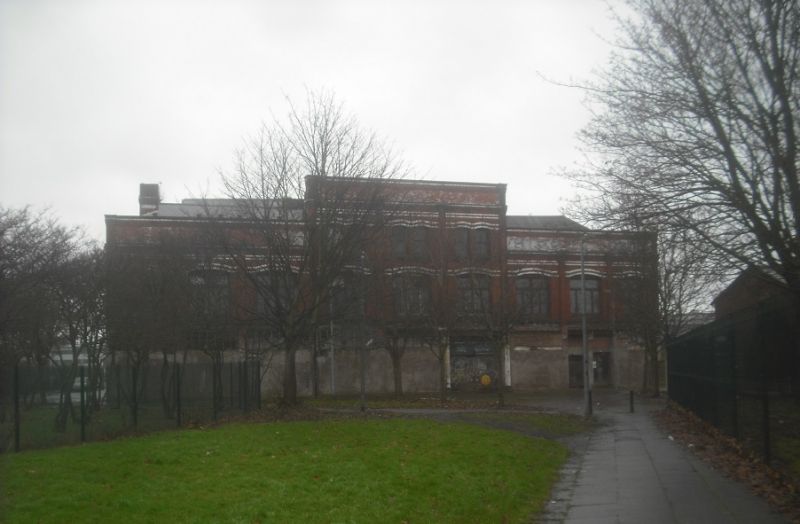 PLAN: Hulme Hippodrome was originally surrounded by terraced housing, which has been swept away by later re-development. The theatre has three principal elevations fronting the former Preston Street (now a pedestrianised square), Warwick Street and Wilberforce Close. Attached to the south-east end of the building, fronting Chichester Road is the separately listed Hulme Playhouse. Internally the theatre has a U-shaped auditorium aligned north-east - south-west with a former floral hall off to the north-west side.

EXTERIOR: North-west elevation: this was originally the principal front elevation and fronted onto Preston Street, which has been lost to mid-C20 re-development; the elevation now fronts onto a landscaped square. The plain tripartite elevation is stepped and consists of a taller 3-storey, 3-bay central section flanked by lower 2-storey, 3-bay wings; all with a parapet hiding the roofline and pilaster strips dividing the bays. Large painted lettering on the parapet of the right wing reads 'HIPPODROME' and although remnants of painted lettering survive to the left and central parapets, they are no longer discernible. Originally there were four shops to the ground floor, but the ground floor was rendered in 1971 and the shops subsequently converted for the building's later bingo use. The original main entrance, which was located to the ground-floor right of the taller central section, has been heavily altered. However, the original fluted columns flanking the entrance, which have been encased by later cladding, survive underneath and are partly visible. A deep flat-roofed canopy above the entrance and depicted in photographs dating to the mid-C20 has been removed. The first floor is lit by large windows containing leaded glazing and the second floor by paired sash windows; all have segmental-arched heads and most are boarded-over. The elevation incorporates white glazed-brick banding detail, which is replicated to the building's other elevations.

North-east elevation: this elevation, which fronts Warwick Street and includes the theatre's fly-tower, is mainly of 3-storeys and had billboard-style metal cladding in the mid-C20, which has since been removed. The ground floor has been rendered and incorporates a series of seven original and later inserted doorways. The first floor is lit by widely-spaced casement windows with sandstone sills and lintels, which are replicated to the second floor (most of the windows are boarded over and one of the second-floor windows has been bricked-up), and also incorporated to this side is a square chimney with white glazed-brick decoration. Above the second-floor windows is a dentilled band that continues across the facade of the adjoining Playhouse.

South-west elevation: this elevation, which originally fronted Wilberforce Terrace and now fronts Wilberforce Close, is similarly styled to that to the north-east side with a series of altered entrances to the ground floor and casement windows (some of which are boarded over) to the upper floors. Like the other two elevations the ground floor has been rendered, but at the time of the inspection, much of the render had fallen off, exposing the original brickwork beneath.

INTERIOR: internally the theatre is in a state of disrepair with some missing plasterwork and damage to some ceilings, stairs and floors. The interior contains concrete, stone and timber stairs, which access the various levels and exits. Some original and early doors survive within the theatre, including doors on the main staircase with glazed upper panels bearing the name 'HIPPODROME' and 'STALLS', and leaded-glazed overlights bearing the word 'EXIT'; this staircase also incorporates a decorative gilded wrought-iron balustrade with a painted timber handrail and newel post to one short upper flight.

The u-shaped auditorium, which has two galleries (circle and balcony) and a proscenium arch in its original state, has some mid-C20 alterations, but retains elaborately decorated gilded Rococo plasterwork and panelling to the gallery fronts, doorways, walls and ceiling, including shell motifs, scroll decoration, festoons and garlands, and musical instruments. The decoration is believed to have been in cream and gold originally, but is now in a variety of vivid colours. The proscenium has a moulded architrave incorporating 'green man' imagery and is flanked by giant fluted Ionic columns, which support a decorated entablature that incorporates a frieze with masks flanked by carved consoles, and a large central cartouche flanked by putti; the original steel fireproof curtain has been removed. In front of the orchestra pit is an elaborate gilded-iron balustrade. The seating has been removed to the stalls and balcony, and that which survives to the circle is a later replacement. The auditorium ceiling incorporates decorated ribs that are supported by Atlas-style figures emerging from consoles. The rest of the ceiling is panelled with central roses and panels incorporating foliage decoration and cartouches, surrounded by similarly decorated outer panels.

The circle has straight rows of seats to the central stage-facing section and side arms, whilst the balcony has straight rows to the centre, spanning between the side walls. Both galleries are supported by painted and gilded cast-iron columns with foliated capitals (some of the columns have later mosaic cladding), and similarly-styled slender columns on the balcony support the ceiling. The circle has boxes located at the stage end of each side arm, flanking the proscenium, with a further box located immediately above and accessed by a small stair. The relatively narrow first-floor circulation space behind the circle retains original decorative pelmets to the windows. The balcony has stores and a later function room in-filling the stage-end of the side arms with an original balustrade retained in front.

Located within the altered main entrance off Preston Street, and hidden by a modern suspended ceiling, is some early plasterwork decoration, including a large sun motif on the ceiling. Another former entrance on the south-west side of the building has been converted into a ladies powder room and has painted plasterwork decoration to the upper part of the walls in the form of a rope draped with curtain swags. Dressing rooms are located in the basement and on the first-floor level on the Warwick Street side of the building; those in the basement were not inspected, but are believed to be similarly styled to the first-floor rooms, which are plain and incorporate some wall panelling. A mercury arc rectifier (possibly c1901) by Statter & Co. of London also survives within the basement. No original machinery survives within the fly-tower, but spotlights survive in a small lighting room at the rear of the balcony.

The former floral hall is located at the north-western end of the building and was originally used as a smoking lounge and was decorated with palms and plants, with a Japanese panoramic design adorning the walls, which is no longer extant. The hall was originally open to a glazed lantern roof with a first-floor balconied promenade supported by cast-iron columns and incorporating Broadhead Circuit offices off to the north-west side. The hall has since been floored over and is now used as function rooms; all but one of the columns have been encased and the adjoining former shops, which were formerly converted as part of the building's alterations for bingo use, are now office and storage space. The hall's balcony front has been removed and the first-floor offices have been converted into storage rooms and a bar lounge (a small section of the balcony front survives in a wall opening in the bar area), and a kitchen has been inserted to the north-east rear of the hall. A heavy decorated beam at the south-west end of the space is supported by a painted cast-iron column with a foliated capital. The hall's roof glazing has been removed and a suspended ceiling inserted.

Hulme Hippodrome was constructed in 1901 to the designs of JJ Alley and was originally known as the Grand Junction Theatre and Floral Hall. The theatre was built as part of the Broadhead Circuit, which was a chain of theatres in the north-west of England founded by William Henry Broadhead; the Grand Junction Theatre was Broadhead's third theatre. The theatre, which had a seating capacity of 3000, originally specialised in melodrama and also included a floral hall incorporating Broadhead Circuit offices and a refreshment kiosk.

In 1902 JJ Alley designed the neighbouring Playhouse (originally known as the Hulme Hippodrome) as a music hall (separately listed at Grade II), which was added onto the south-east end of the Hippodrome. It has been suggested that the two theatres were originally linked by an arcade, but there is no visible evidence for this. JJ Alley also designed a number of other theatres in the Manchester area, many of which have since been demolished, but survivors include the Grade II listed Tameside Hippodrome (1904, with a 1933 Art Deco interior by Drury & Gomersall).

Following William Henry Broadhead's death in 1931 many of the Broadhead Circuit theatres were sold off, including the Hulme Hippodrome, which was sold to Buxton Estates in 1932. In 1938 the Hulme Hippodrome was acquired by the James Brennan Circuit, which also purchased the adjoining Grand Junction Theatre in 1950; refurbishing and redecorating both theatres at this time and reducing the capacity of the Hippodrome to 2000. Inter-connection between the two theatres was blocked-up in 1955.

In 1962 the theatre was used as a bingo and casino venue. At this time one of the Preston Street shops was also converted to create a larger entrance, the former booking office window was reduced in size, and the dividing columns between the shop units were covered with cladding. By 1971 the ground floor of the building had been rendered and had also been partly encased within metal cladding (now removed). By the late-1970s the shop units had also been converted for bingo use and several of the entrances had been blocked-up. Further internal alterations were carried out in 1977 and 1981, and in 1986 the floral hall was converted into a snooker room and lounge bar, having previously been adapted for various uses, including as a store for the Broadheads' cars, as an aviary to keep waiting audiences entertained, and as a gaming machine area; the conversion resulted in the loss of the original partly-glazed roof and the promenade balcony front. The theatre was also briefly used as a nightclub, which closed in 1986. It has latterly been in use as a church.

Hulme Hippodrome, constructed in 1901 to the designs of JJ Alley, is listed at Grade II for the following principal reasons:

* Building type: it is a good example of a large provincial theatre illustrative of the burgeoning demand for music hall and theatrical entertainment in the late-C19/early-C20;

* Interior quality: the main auditorium is a richly detailed and flamboyant space decorated with ornate painted and gilded Rococo plasterwork;

* Level of survival: despite later alteration occurring to the rest of the building the principal space of the main auditorium remains largely unaltered;

* Design interest: the auditorium incorporates straight rows of seats to the balconies; an atypical arrangement in theatres at this time and a Broadhead Circuit theatre characteristic;

* Historic interest: it was constructed for the Broadhead Circuit, one of the largest independently-managed theatre circuits in the country, and hosted numerous well-known early-mid C20 performers;

* Group value: it has strong group value with the adjacent Grade II listed The Playhouse, Hulme (List entry 1293008, NHLE) which was also designed by JJ Alley and was constructed in 1902; the two theatres together representing an unusual twin theatre arrangement.