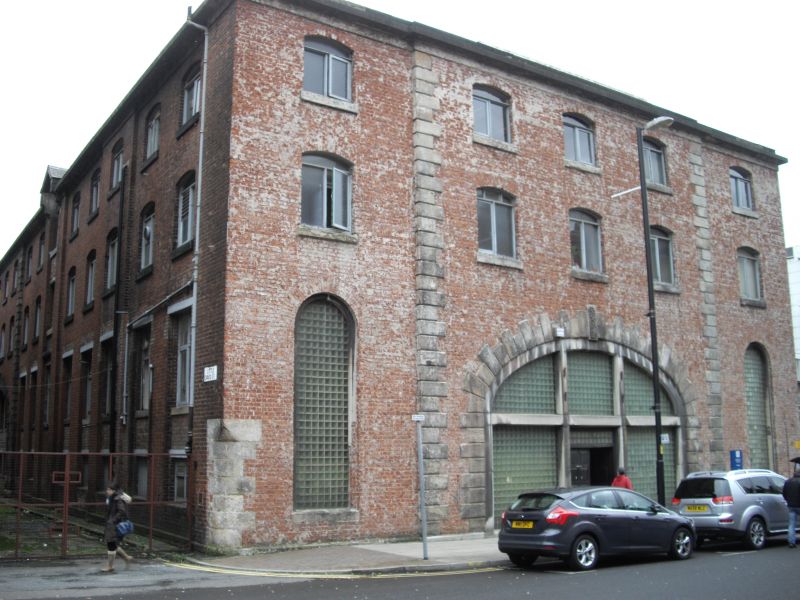 Canal warehouse, in use as a Polytechnic library at the time of listing.
Early to mid C19, probably enlarged in later C19, and subsequently altered.
Red brick in English garden wall bond (the front rendered), with
sandstone dressings, corrugated sheet cladding to jettied
upper floors at rear (roof concealed), internal cast-iron and
wrought-iron frame. L-plan formed by main range on east-west
axis between Chorlton Street at front and former canal basin
at rear, with a wing at the south-east corner. Three storeys
over a basement, 5x13 bays; symmetrical west front 1:3:1 bays,
now covered with scored render; the centre breaks forwards
slightly and has rusticated quoins and a very wide
elliptical-arched former wagon entrance with rusticated
long-and-short surround and raised keystone (now blocked with
C20 glazed screen containing doorway), and segmental-headed
windows on both floors above, all with raised sills and
altered glazing; the outer bays have tall round-headed
openings with C20 glazing, and upper windows like those in the
centre. The 13-window left return wall has (inter alia) a
3-window portion towards the rear which matches the centre
portion of the front and has a similar wagon archway (now
blocked, with windows on 2 levels), and to the right of this a
narrow loading slot with a pitched canopy breaking the eaves.
The rear is distinguished by a full-width cantilevered jetty
from the 1st floor upwards overhanging the side of the former
basin, and the wall below this has a mooring ring and the
remains of a wooden wall-crane. Interior: retains intact
framework of cast-iron columns (those at ground floor very
thick, with entasis, and vertical fins), a system of struts
and tie-rods to the cantilevered upper floors, and timber
king-post roof trusses with raked struts.