A Grade I Listed Building in Letheringham, Suffolk 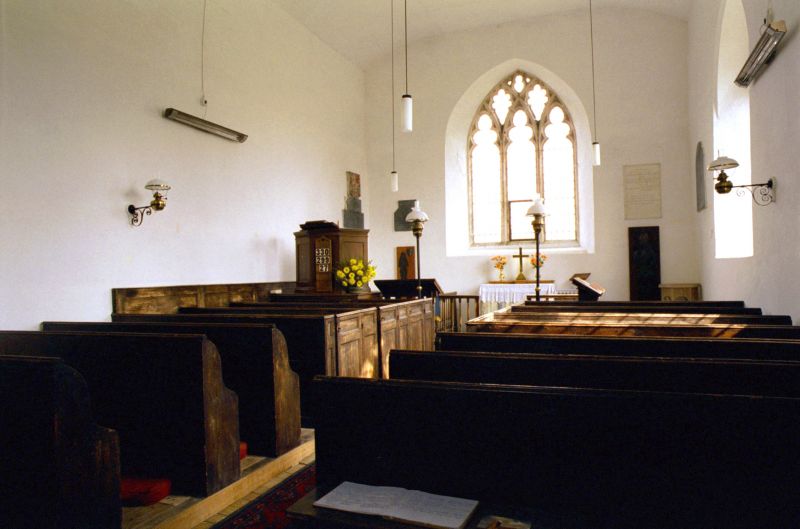 A Parish Church, formerly the nave of the Priory Church of Augustinian Canons, founded in the C12. The tower is C14 in origin, the south porch is an addition of c.1685, and the building was repaired in c.1789.

MATERIALS: flint rubble with ashlar dressings and a plain tiled roof; the south porch is of red brick and the stone walls of the nave are plastered.

PLAN: nave with a west tower and a south porch.

EXTERIOR: the west front of the tower has diagonal buttresses with flush-work panels reducing at each stage. There is a blocked doorway at the ground floor with an ashlar surround decorated with keels, ogee and cavetto rolled mouldings and a hood mould above. The first stage has a two-light window with trefoil ogee heads and a quatrefoil to the apex. At the second stage is a cusped lancet. The third, belfry stage has a two-light window with trefoil heads and a quatrefoil to the apex. Moulded string courses are applied beneath the belfry window and the battlemented parapet which has flushwork tracery panels and heraldic beasts at the corners. The south face is blind at all stages except for the belfry window with the same detailing as that at the west. A staircase turret with ashlar quoins to the corners is curtailed at the second stage. The north face follows the same treatment as the south, but does not have a stair turret; there is brick patching around the belfry opening.

The south porch of c.1685, located at the west end of the nave, is of English bond brick with a central round-arched doorway containing a door of 6 panels. The ogee-shaped gable has a brick band below and there are round-headed windows to the side elevations, one of which is blocked.

The south elevation of the nave to the east (right) of the porch has two C13 windows with intersecting Y-tracery. Between the two windows is a buttress with stone dressings and 2 offsets below the upper of which is a slightly angled sundial bearing the date 1608. The wider angle buttress at the east end has stone dressings and three offsets; it is similar to the angle buttresses at the east end of the north elevation and two at the east elevation. The latter was built in c.1789 and incorporates a re-set C14 window of 3 lights with intersections, glazing bars and tracery with cinquefoil heads and daggers above. The north elevation is blind with 3 buttresses, each with 3 offsets.

INTERIOR: from the porch, a C12 doorway leads to the nave, and on the north side of the nave, a similar opposing doorway (blocked) was discovered in 1994. Both are decorated with chevron and billet motives, and have cushion capitals. The foot of the north doorway is set 0.8m below the nave floor, perhaps respecting the level of the cloister into which it led. The nave has colonettes at either side with cushion capitals, and billet and chevron mouldings to the outer arch: wave moulding to the inner arch. The roof is not exposed, but dates to the C18. The tower arch is slender with reused, decorated Norman stone. On either side of the tower arch are niches containing sculptured fragments, presumably from the Canons Chancel. Fragments of memorials to the Naunton family remain. A C14 brass to Sir John Wingfield and a C15 brass to Sir Thomas Wingfield restored to the Church are not in situ, but are mounted on the walls. Further C17 memorials to the Wingfield and Naunton families are at the east end. The altar table is said to be C17 in origin. The early-C19 pulpit has a fluted frieze and the nave box pews are of the same date.

The Church of St Mary comprises the surviving nave of the Church of the Augustinian Priory founded on this site in about 1194 by William de Bovile. The C16 gatehouse of the Priory lies to the south west and is listed at Grade II. The site of the Priory is a scheduled monument lying immediately to the south of the churchyard, wrapping around the Church to the west, north and east. The Priory was a cell of the Augustinian Canons of the larger Priory of St Peter and St Paul in Ipswich. The tower was added in the C14, the interior tower arch being formed with re-used Norman stone carved with chevrons said to be from an earlier tower.

The Priory was dissolved in 1537. The Church at this time consisted of the west tower, the nave and the Canons Chancel, which was wider and slightly longer than the nave and, it is postulated, a south aisle to the chancel. Both the site of the Chancel and the south aisle are included in the scheduled ancient monument. The C12 Romanesque north door of the nave, discovered in 1994, is thought to have led into the cloister. The brick south porch was added in 1685. The Church housed many monuments and brasses commemorating William de Bovile and early monuments to the Wingfield family. Nearly all of these monuments were lost following the dissolution when the Priory land was granted to Sir Anthony Wingfield, the nearby lord of the manor, who gave it to his daughter Elizabeth, the wife of William Naunton. Notes and sketches recording these historic fixtures and fittings were compiled between the C16 and C18. One recorder, Tom Martin of Palgrave, found the church in 1744 to be `in utmost decay…shorn up and supported both inside and without in dayly expectation of falling’, but also noted that ‘noble remains of antiquity’ continued to remain in the church. By 1780, a visiting antiquary noted that the `roof and much of the walls entirely down. The roof of the chancel was standing but all the monuments so broken and battered to pieces that havoc must have been purposely committed’. The parishioners were directed to put the building into decent order by the church authorities in 1789, resulting in the dismantling of the chancel and the reuse of the stone to repair the nave. A new east wall was built, inserted into which was the C14 east window of the chancel. Fixtures and fittings of the Georgian period remain include the altar, pulpit and box pews.

The Church of St Mary, Letheringham, is designated at Grade I for the following principal reasons.
* Architectural interest: the church has exceptional interest for the survival of a significant proportion of C12 fabric and features contemporary with the foundation of the priory of Augustinian canons on the site, of which the current church was a part;
* Historic interest: as part of the priory, the church serves as an upstanding reminder of the importance and influence of monastic houses on the social and economic life of medieval English society;
* Interior: the church retains an ensemble of Georgian fixtures and fittings including a pulpit and box pews; as well as medieval brasses and sculptural items from the demolished Canons Chapel;
* Group Value: the church has very significant group value with the listed Priory gatehouse and the Scheduled Monument of the Priory, which extends to the south, west, north and east of the Church.