A Grade I Listed Building in Woodbridge, Suffolk 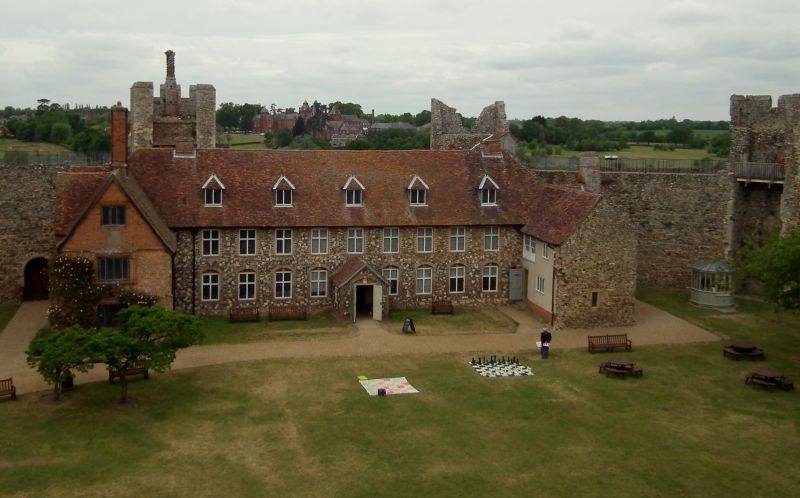 Sited within the enclosure of the Castle's curtain walls, a Poor House, endowed by Sir Robert Hitcham who purchased Framlingham Castle in 1635, but not built until 1729, on the site of the Castle's medieval great hall.

The Poor House was built in 1729 on the site of the medieval great hall, and incorporates parts of that building in its interior, and externally in the north wing east wall. Although much altered, the Poor House retains evidence of a sequence of uses spanning the castle’s development from the medieval period to the present day.

MATERIALS
The Poor House is built against the Castle walls, but its entrance front is built of a mixture of rubble sandstone, split flint and red brick laid to a random pattern. There are red brick margins to openings and a red plain tile roof covering. The north wing to the Poor House incorporates early rubble work together with later brickwork.

PLAN
The building is linear in plan, with its attic level extending over the Red House at the south end, and with a wing at the north end thought to have been rebuilt in the C16.

EXTERIOR
The building, originally of two storeys and attics, is now single-storeyed below attics. The front (east) elevation comprises eleven bays, with a nine window front and a central single storey gabled entrance porch. There are five hipped two-light attic dormers, and reduced brick ridge stacks at either end of the building. The windows are transomed two-light openings set below segmental brick arched heads, the arches shallower at first floor level. Above the arches of four windows and the entrance doorway are re-set medieval heads from now demolished castle buildings. The south elevation of the north wing is rendered, with paired twelve-pane sash windows above a doorway, and modern two and three-light windows to the east bay. The east wall is a remnant of an earlier building which extended further eastwards, with further traces in the heavily remodelled north wall. The principal feature of this wall is a large tapered chimney stack of brick and rubble stone which served the large oven of the Poor House kitchen located within.

INTERIOR
The interior of the building has been remodelled, and now serves as a display area and site shop. The first floor has been removed, and two wide fireplaces are visible at the north end of the display area. The rear wall incorporates three wide and splayed arched openings to lancet windows thought to have formed part of the re-building of the great hall at the end of the C13. At the south end of the ground floor is a moulded surround to a doorway leading to the stone spiral stair which gives access to the wall-walk. A recess to the right of this doorway is thought to have originally been a doorway which gave access to the first floor of the medieval hall’s service wing. A further doorway off of the stair leads to a windowless chamber. The stair and its doorways are thought to have been built in the late C15 or early C16. The ground floor of the north wing was used as the Poor House kitchen, and houses a large brick oven. A stone fireplace in this area dates to the early C16 and the timbers to the ceiling above have been tree-ring dated to 1585-6. The upper floor of the wing houses a small museum covering the later history of the town, but has its origins as the upper floor of the medieval hall’s north range dating to the late C13. A fireplace with an early C16 moulded stone surround is located in the north wall, part of the Tudor refurbishment of the Castle at that time. The attic floor of the Poor House main range was originally the dormitory, and is now a single open space with exposed rafter, collar trusses and two tiers of staggered purlins. At either end of the attic are tapered brick chimney breasts incorporating shallow segmental-arched hearths. In the centre of the attic floor is a blocked hatch used as a coffin chute from the dormitory.

The period between the C11 and C16 was characterised by a deeply engrained social hierarchy. Castles were the residences of seigneurial families and their households, and incorporated physical features expressive of the idea of defence, but many sites would have been ineffective against serious assault, and the possession of arrow-loops or gun-ports, drawbridges, portcullises, crenellations and moats, was more plausibly for visual effect than practical use. It would appear that most castles at all periods involved an element of architectural display; were often sited for dramatic as well as strategic effect; and were often part of a wider landscape of power and display alongside religious establishments, buildings for administration and designed landscapes including deer parks.

Framlingham Castle was built by the Bigod family in the C12, the present masonry curtain walls and towers replacing an earlier castle on the site thought to have been built c.1100. The present structure and the extensive earthworks which surround the Castle represent the ongoing development of the site by a succession of noble families, including the Brothertons, the Mowbrays and the Howards until 1635, when the site was sold to the philanthropist lawyer Sir Robert Hitcham.

The manor of Framlingham was granted to Roger Bigod by Henry I in 1101. Roger’s son Hugh was created Earl of Norfolk by King Stephen. Framlingham was one of several castles held by Hugh Bigod which were surrendered to Henry II at his accession, and the site was occupied by a royal garrison. Framlingham was returned to Bigod in 1165 after payment of a heavy fine, but following his involvement in a further rebellion led by Henry II’s eldest son in 1173, the Castle was demolished under the direction of Henry’s engineer Alnodus.

The Castle at this stage is thought to have consisted of a motte and bailey, the motte thought to have been located on the site of the later Poor House. The Bigod lands were eventually returned to Hugh’s son Roger II in the 1180’s. Roger rebuilt the Castle in stone, incorporating the remains of the earlier hall and chapel whilst constructing the massive curtain walls and towers seen today. The Bigod estates returned to royal control in 1306, and Framlingham was administered by the monarch’s relatives until 1397 when Thomas Mowbray was made Duke of Norfolk. The title passed to the Howard family by marriage and John Howard is thought to have carried out extensive repairs and much refurbishment around the Castle site prior to his death in 1485 at Bosworth Field. Although having fought with his father at Bosworth on the losing side, John’s son Thomas gradually restored the family’s fortunes and estates. He served as Henry VIII’s Earl Marshall and led the King’s forces at the Battle of Flodden Field in 1513, after which the title of Duke of Norfolk was restored to the family. Thomas is thought to have undertaken much of the Tudor refurbishment of the Castle, including the remodelling of the gatehouse and the addition of the brick chimneys and other now demolished brick structures within the curtain walls. He died a national hero at Framlingham Castle in 1524.

Howard’ successor, also Thomas (d 1554), retained Framlingham, but lived at newly-built Kenningham Hall in Norfolk. His son, Henry Howard was executed by Henry VIII in 1547, and the Howard title and lands were surrendered to the Crown. Edward VI held his first court at Framlingham, and in 1552, his sister Mary Tudor inherited Framlingham, having been granted the Howard estates in East Anglia. Framlingham was the stronghold to which she withdrew when threatened by the Duke of Cumberland who sought to ensure the succession of Lady Jane Grey. When Northumberland’s campaign floundered and ended with his surrender, Mary travelled from Framlingham to London to be crowned on the 1st October 1553. She restored the elder Thomas Howard’s titles and Framlingham once again became a Howard property. His grandson Thomas Howard inherited the title on his grandfather’s death, but was executed in 1572 for his part in a plot against Queen Elizabeth. Framlingham, by this time in a much decayed state, passed once again into royal control, and remained so until 1603 when James I restored the Howard title.

In 1635, Framlingham, its manors and estates was sold for £14.000 to a wealthy lawyer and politician Sir Robert Hitcham who in 1616 had become the King’s senior sergeant-at-law. A year later at his death, Framlingham and its estates were left to Pembroke College Cambridge where Hitcham had studied. The bequest was conditional upon the requirement that Framlingham and its estates being put into trust for the benefit of three Suffolk towns, Framlingham, Debenham and Coggeshall, requiring that ‘all the castle, save the stone building be pulled down’ and a Poor House established on the site. However, it was not until 1654 that the first new building was erected at the Castle site. This was the Red House, which quickly ceased its intended use as a dwelling, becoming the Poor House. However, it clearly was not capable of housing many of the needy poor, and in 1664, after much delay and the need for additional funds from the parish, a new, and much larger Poor House was built within the Castle walls. This operated successfully until 1839 when the inmates were transferred to the new union workhouse at Wickham Market.

After the closure of the Poor House, the Castle was used for general parish purposes, and the Poor House became the parish hall. The Castle had remained central to Framlingham life throughout the C19, but in 1913, it was given to the Ministry of Works and passed to English Heritage in 1984. The Castle has remained the focus of research, and has undergone numerous phases of repair and consolidation. More recently, the Poor House has been refurbished as a display and interpretation area for the Castle and the associated surrounding historic landscape.

The Poor House to Framlingham Castle is listed at Grade I for the following principal reasons:

* Architectural interest: the Poor House stands within the Castle's curtain wall and incorporates parts of the former medieval Great Hall in its fabric, thus retaining evidence of a sequence of uses spanning the Castle’s development from the medieval period to the present day. It has exceptional architectural interest as a component of the Framlingham Castle site, and is a rare surviving example of the provision made for the destitute poor, prior to the passing of the Poor Law Amendment Act of 1834;

* Historic interest: the Castle is an exceptionally well-preserved and well-documented medieval stronghold, its origins in the early C12 adding to phases of occupation of the site dating from at least the Anglo-Saxon period. The Poor House represents the most significant post-medieval addition to the Castle;

* Group value: the Poor House has a strong visual and functional relationship with the Castle remains and the attached Red House (listed separately).