A Grade I Listed Building in Great Livermere, Suffolk 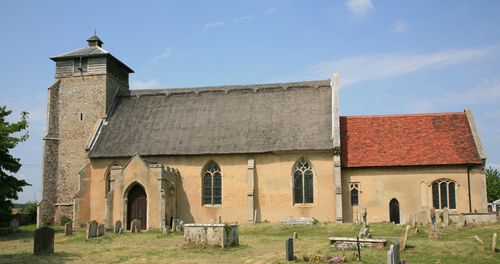 Parish church. C13 and later. In rubble flint, still partly covered in old
render, Reed thatch on nave, plaintiles with ornate ridge on chancel. The nave
has diagonal buttresses at the west end, single angle buttresses on the east. 3
2-light windows with reticulated tracery on north and south sides. Blocked
north doorway with rebuilt arch, probably C17: rounded, with hollow moulding.
The chancel has single-light low-side windows to north and south walls, and on
the south side a plain C13 priest's door, one blocked C13 lancet window, and a
3-light window with intersecting tracery. The 3-light east window, C19
restored, in Decorated style similar to the nave windows, has a blocked
foliated circular window in a square surround above. To the north of the
chancel, a castellated early C19 vestry, in black knapped flint with white
brick dressings, has 3-light round-headed windows with intersecting Gothic
tracery. Truncated west tower in 3 stages, with a weatherboarded top and
pyramid roof. Diagonal buttresses on west. South porch with gabled pantiled
roof, crenellated along the sides. Diagonal buttresses. 2 2-light windows,
restored 1983. Open timber roof, 3 bays, arch braced. C13 south doorway.
Inside the nave there are remains of medieval wall-paintings on the north and
south walls, and an elaborate canopied and traceried niche in the north wall
which housed the shrine of Our Lady of Pity. Royal Arms, carved in high
relief, over the north door. Early C20 benches, but 6 Jacobean benches with
ends in fleur-de-lys form at the back. An octagonal late C14 front has
traceried panels on a plain base. Large double doors to base of tower with
baroque mouldings and carving, and a fine 3-decker pulpit with raised fielded
panels and acanthus foliage of the same date, circa 1700. A piscina at the
east end of the south wall, with cusped ogee head and a tiny niche beside it.
Fine screen, with traces of gilding and colour, cusped ogee heads to broad
single light divisions, crocketed spirelets. The blocked doorway to the rood
stair beside the pulpit. Roof timbers replaced in late C20. The chancel roof,
uncovered during restoration in the 1960's, is very fine: king post trusses
with arched braces to the tie-beams extending down the walls, and terminating
in coronated capitals. 2 rows of moulded butt purlins. Pierced and carved
cornice with battlemented ornament at top and bottom. Along the south wall is
the remains of a band of painted medieval decoration. On each side of the east
window is a long cusped and crocketed niche. The southern low side window
retains its wooden shutter. Fine early C18 3-sided altar rails with iron-twist
balusters. 3 early C17 benches, one with 'WM 1601' carved on the end, and a
high-backed settle, incorporating a C15 poppy-head bench-end.