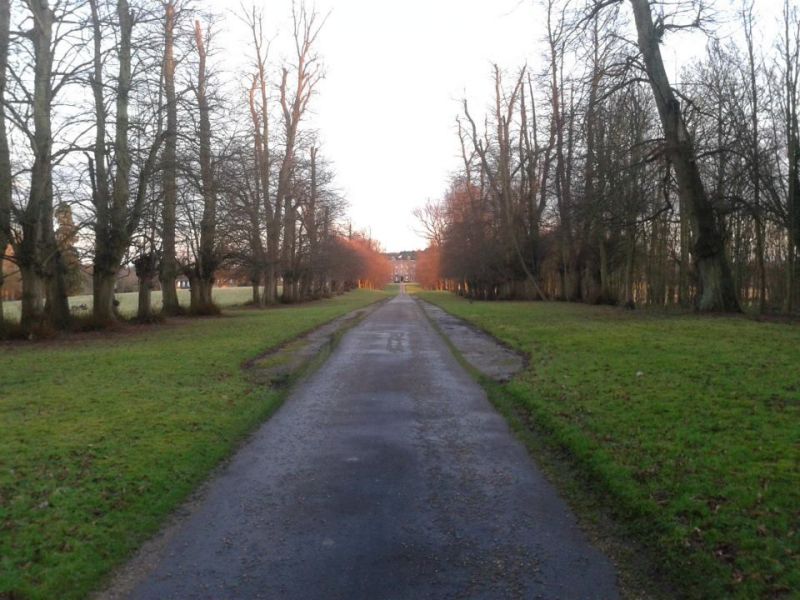 Large country house by James Wyatt, 1792; probably a remodelling of the
earlier house of 1775 by Richard Norris. Both phases for philip Broke. In
the Gothick Style. Entrance front of 3 storeys and 5 windows: a central block
of 3 windows, slightly set-forward, with wide flanking blocks having prominent
2-storey canted bay windows. Red brick with slender buttresses at corners and
on either side of centre block. Embattled parapets with cornice and weathered
copings of limestone. Hipped slated roofs. External and internal chimneys of
red brick. Sash windows with flat arches of gauged brick and moulded square
hoodmoulds. Small-pane sashes. The upper central windows are 4-centred arched
and hood-moulded, and in the heads the glazing bars are curved and
intersecting. Single-storey entrance porch of late C19/early C20, red brick
with moulded cornice and parapets of limestone. Entrance doorway of grey
marble with Corinthian entablature on columns. Pair of oak panelled doors.
Rear garden elevation: a pair of slightly set-forward wings, of one window,
but of equal width to the recessed 3-window centre block. At each corner of
the wings is a polygonal buttress, reduced at the 1st storey and with
battlemented parapets. At centre 1st floor is an arched niche which formerly
held a statue; above that is a blind window framing a carved stone
achievement. Each wing has a large French window. Between the wings is a
loggia with a triple pointed arcade; within the central bay is a blind arched
and hood-moulded window, and on either side an 8-panelled door with broad
architrave. To right is a mid C19 orangery wing, 1-storey, and forming a
convex quarter-circle on plan. The centre bay has large segmental-headed
casements and glazed doors, and on either side are hood-moulded Cothick
windows with 2-light casements, each light having an arched head. Much
original restrained internal decoration: the apsidal-ended staircase hall has
a cantilevered elliptical stone stair. 6-panelled doors, panelled reveals and
window shutters. In a single storey wing is an oak fireplace surround with
the date "M.C. 1680",carved in the manner of 50 years earlier. A section of
linenfold panelling of mid C16 has a central carved figure with achievement.
Both the above pieces were introduced mid C20 from elsewhere. The
distinguised Broke family included Admiral Sir Philip Broke (d.1841), victor
of the Shannon and Chesapeake sea fight.