A Grade I Listed Building in Swindon, Oxfordshire 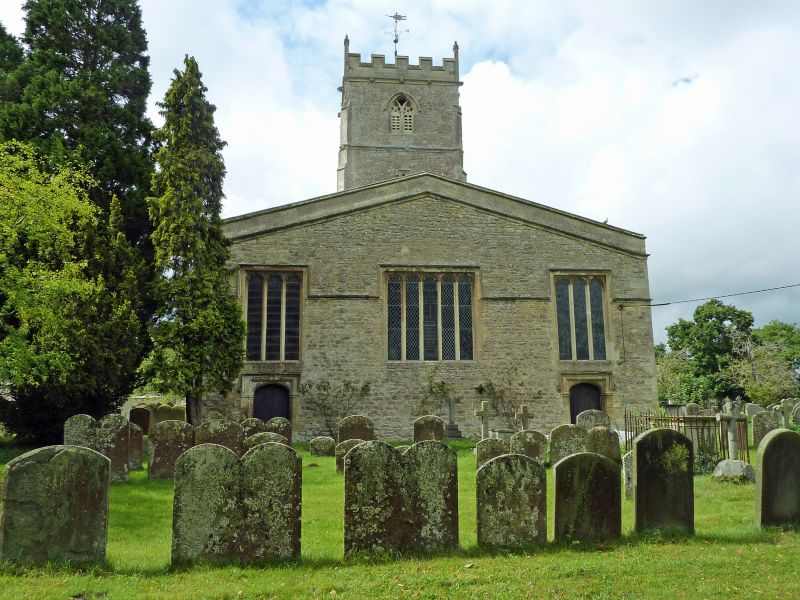 Church of England Parish: Shrivenham with Watchfield and Bourton

2.
Originally a c12 foundation, cruciform in plan whose central tower was rebuilt early
in the C15. This Perp tower and 2 pilaster buttresses on the W wall were retained
when the church was rebuilt at the expense of Lord Craven in 1638. The solution was
to create a rectangular space on a line with the end walls of the nave, chancel and
transepts. A W porch was added in the mid C18. The church is built of coursed rubble
stone and stone dressings with dressed stone quoins and ashlar facing to the W porch.
The central tower rises 3 storeys above the roofline and has diagonal buttresses with
set-offs and carved figures, 2 light pointed bell openings with Somerset tracery and a
final string course with gargoyles beneath a recently restored embattled parapet with
corner pinnacles. The apexes of the original roofs on the cruciform church are
clearly visible on all four sides. On the S face is a diamond shaped clock and on the
roof is a weather vane. The body of the church has plain parapets to the N & S and
pedimented parapets to E & W. It is lit by excessively tall 4 light cusped Perp style
windows with flat heads linked by a continuous string course. The W front has a
5 light window above the centrally placed porch whose W wall has a pediment and whose
N & S faces have 4 centred archways to the studded plank doors with hood moulds and
curious scrolled label stops. The E end is a symmetrical composition with 2 three
light windows flanking a central 5 light window and below the outer windows 2 doors
similar to those on the W porch. On the SW corner are 2 sundials and below them the
inscription: 'All these dials were made by Salem Pearse, 1720'.
Inside the classicism glimpsed in the uniformity and symmetry of the exterior is
achieved in the arcades of the 3 bay nave and 2 bay chancel which have bulbous Tuscan
Doric piers with an entasis to the mid point supporting heavily moulded capitals and
round arches. The tower arches were also rebuilt but in a markedly medieval manner
with continuous mouldings to the pointed arches. The fan vault beneath the ringing
stage is original. Also original is the rood loft newel staircase in the SW pier of
the tower. The nave and chancel roofs are covered with simple late Perp tie beam
timber structures with open panelling between the principal rafters. The side aisles
have simple lean-to timber ceilings. All the windows have semi-circular rere arches
and one above the W door has shafts with capitals of Transitional date.
There are various interesting monuments in the church of which the most ancient is a
C14 defaced effigy of a woman in the S aisle. Others include several large black
slate tablets with armorial crests to the Barrington family of Beckett Hall set in the
floor of the chancel, two mural tablets either side of the altar to John Wildman and
John Shute of 1713 and 1734 respectively and a neo-classical urn a round plinth of
1793 on the NE corner of the tower facing the altar to William Wildman designed by
James Wyatt and sculpted by Richard Westmacott. The chancel E window has 3 fine panes
of armorial glass and hanging from the roof there are 3 brass chandeliers, the centre
one bears the inscription: 'Ex douo Guillielmi Parson 1726'. The woodwork throughout
is an exceptional survival of the period of rebuilding: a pulpit with tester whose
panels have perspective decoration as too has a contemporary chair in the sanctuary,
the pews under the tower and the pews to the nave, cut down in 1887 and the panelling
on the aisle walls. The chancel screens are pseudo C17 of 1901. The late C12 font of
Purbeck marble has an octagonal bowl with round arched blind panelling set on a round
Stem with an octagonal base. The brass eagle lectern is of 1901. In the porch is an
enormous benefactions board and a royal coat of arms dated 1764.