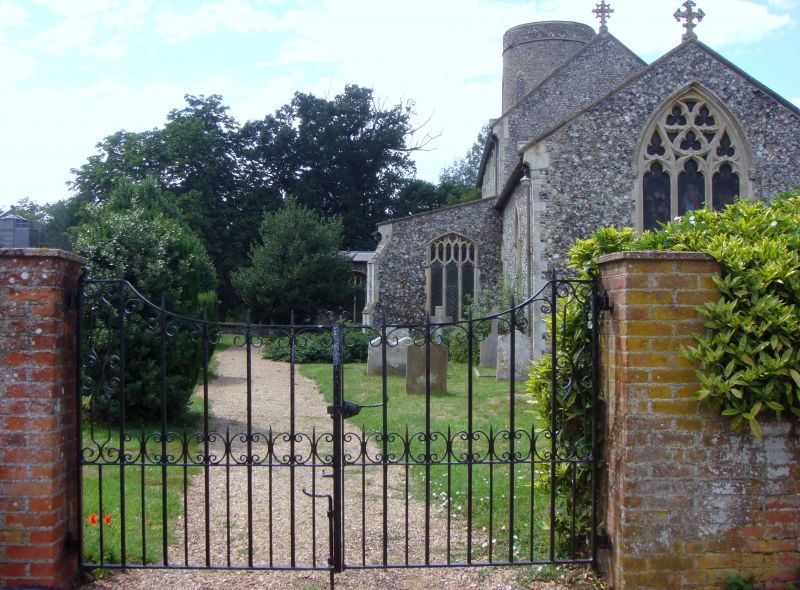 Parish church. Medieval; considerably restored 1865-6. Nave, chancel, north
and south aisles, west tower, south porch, north vestry. Flint rubble with
stone dressings. Slated roof to nave, the other roofs clad in lead and
copper. Round tower, perhaps C12, with a C14 belfry stage containing 4
cinquefoil-headed openings with matching flushwork panels between. Flat
parapet. Nave probably C14, with C15 4-bay clerestorey. C15 3-bay aisles,
the windows largely renewed. C15 knapped flint porch with panelled flushwork
to the facade and plinth. Moulded entrance arch, the spandrels carved with
angels bearing shields; above the entrance a canopied niche containing a C19
figure. Original porch roof. C15 moulded nave doorway. C14 chancel with
much C19 renewal. Interior. 3-bay aisle arcades. The restoration of 1865-6
included a new arched-braced nave roof with stone corbels of prophets at the
foot of the wall posts; substantial renewal of the aisle and chancel roofs;
new poppyhead benches and matching stalls. 2 C14 piscinas, the one in the
sanctuary much restored. Cusped niches to each side of the chancel arch. In
the south aisle is the shaft and the lower half of the bowl of a C15 font,
with panelled decoration.