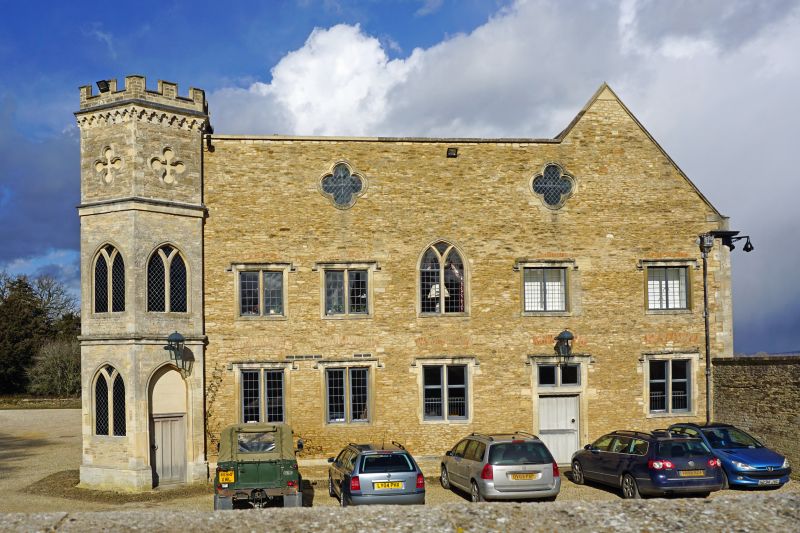 Manor House now house. c.1580 for the Yate family; converted c.1757 by Sir
Robert Throckmorton into Gothick style stables to Buckland House (q.v.). Squared
and coursed limestone ashlar dressings; Welsh slate roof. Double-pile plan dates
from c.1757 conversion. 2 storeys; 9-bay elevation between polygonal corner
turrets. The crenellated parapet is carried in a shallow arch over the centre 3
projecting bays; pointed arch and two orders of engaged columns to high central
arch, with C20 double doors and overlights in a flat-headed moulded architrave.
Doorways in 2nd, 6th and 8th bays have roll-moulded pointed arches over late C19
stable doors with Y-tracery overlights. Pointed arches to 2-light Y-tracery
Gothick windows; 2 quatrefoil windows on the first floor flank the central
archway. Moulded plinth and string course; trefoil-headed and corbelled frieze
to moulded cornice; crenellated parapet. Polygonal towers at corners have
similar Gothick windows, those on the front retain their diamond-shaped leaded
panes and the blind side windows retain painted imitation latticing, the 3rd
storey of each tower has quatrefoil windows and is surmounted by a similar
cornice and parapet to the main range. Mid C18 rainwater goods. Gabled M-shaped
roof; internal stacks, gable end and ridge stacks to rear. Right side wall has a
5-window range of late C16 two-light stone mullioned and chamfered windows, a
mid C18 Gothick style 2-light window with leaded lights and two leaded
quatrefoil lights at the top; also a late C19 stable door with mid C18 chamfered
stone architrave with two overlights. The left side wall has scattered
fenestration of 4 similar late C16 windows, two of which have been blocked, a
mid C18 Gothick style 2-light window and a mid C18 six-panelled door flanked by
2 similar late C16 one-light windows. Each side wall has a parapet running from
the top of the polygonal corner tower towards the rear where the wall is gabled.
To the centre of the rear elevation is an Elizabethan 12-light canted bay window
of stone mullioned and transomed and ovolo-moulded lights, which is flanked by
similar 2-light windows. To left and right of this bay are mid C18 Gothick
windows with Y-tracery, some of which have been blocked.
(Buildings of England: Berkshire, p.l06; A.S.N. Wright, The History of Buckland,
1966, p.66).