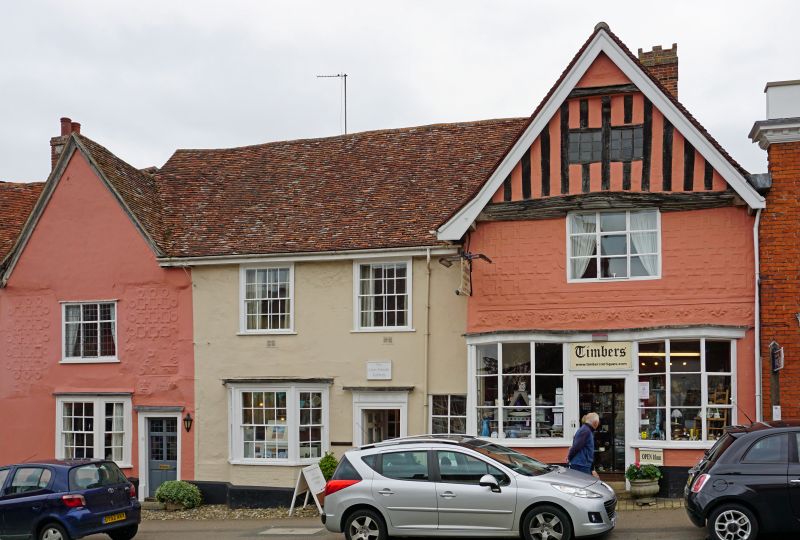 LAVENHAM HIGH STREET
1.
5377
(west side)
Nos 10 to 13 (consec)
TL 9149 50/554 23.1.58
II* GV
2.
A range of timber-framed and plastered buildings of various dates but
originally all one C15 hall house of which now only the north cross wing
remains (No 13) Nos 11 and 12 are of C16 origin and replace the former
main block and south cross wing of the C15 house. Nos 10, 11 and 12
were formerly the Black Lion Inn and No 12 is now called Lion House.
No 10 was probably added when it became an inn and has a large carriage
entrance at the north end, with exposed beams and joists. Roofs tiled.
Two storeys mainly with 2 storeys and attics to the north cross wing.
The north and south cross wings have interesting panelled pargetting
in geometric patterns, partly old and partly restored. The timber-framing
is exposed in the gable of the north cross wing and the upper storey
was formerly jettied but was underbuilt in the C18 or early C19 with
2 bow shop windows with glazing bars and a central 6-panel door. The
gable is jettied on a carved bressumer. The windows of Nos 10 and 11
are mainly double-hung sashes with glazing bars and there are 3 splayed
bays on the ground storey. One doorway has a moulded architrave, ornamental
frieze and cornice. Gabled wings extend at the rear. There are good
original features including moulded ceiling beams and other C15 and C16
features. A number of gables at the rear.