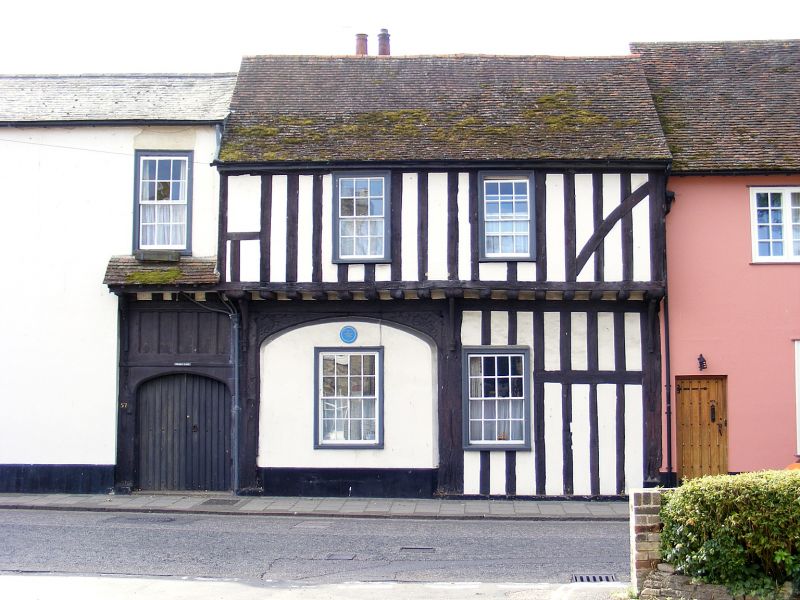 Former gatehouse to Dominican Priory, now house. Circa 1500, with
alterations and additions of c1830 and mid C20. Timber framed, of 2
storeys. Front is in 2 phases. To right the original gatehouse has
exposed close studding and a plaintiled roof. Jettied first floor
supported on solid brackets rising from buttress shafts with carved
capitals. Moulded and embattled mid rail (except right hand bay),
4-centre arched carriage entrance, now blocked, with good foliage-carved
spandrels. An adjacent pedestrian entrance has a renewed 4-centred arch,
over which is a range of 5 plank and muntin panels. C20 boarded and
battened doors. The jetty over this entrance has been cut back and
replaced by a plaintiled pent roof, and the structure above now forms
part of the c1830 addition. This later work is rendered, with a slated
roof and a chimney stack at the gable end. Both phases have 12- and
16-paned sash windows in flush frames. The rear is also rendered, with
C20 casement windows. Interior: Continuous jetty to former rear wall of
gatehouse. Intact rear carriageway arch, similar to front but with no
carving in the spandrels. The feet of 2 posts in the rear wall retain
cranked down braces protecting them from damage from wheeled traffic,
rare survivals. There is evidence for similar braces in the front wall.
Both entrances have chamfered ceiling beams and plain closely-spaced
joists, with no firm evidence of partitioning between them. To right of
carriage entrance is a one-bay room, presumably for a porter: blocked
diamond-mullioned window in side wall, ceiling with large trimmed
stair trap, altered rear wall. Some heavy first floor studding, 2 renewed
diamond-mullioned windows. Open truss with cambered tie beam and long
braces forming 4-centred arch (one brace missing). A second truss, also
apparently open, had shorter braces, now missing. Crown-post roof: plain
posts with 2-way plank-like bracing to the collar purlin, mostly intact
coupled rafters.