A Grade I Listed Building in Oxton, Nottinghamshire 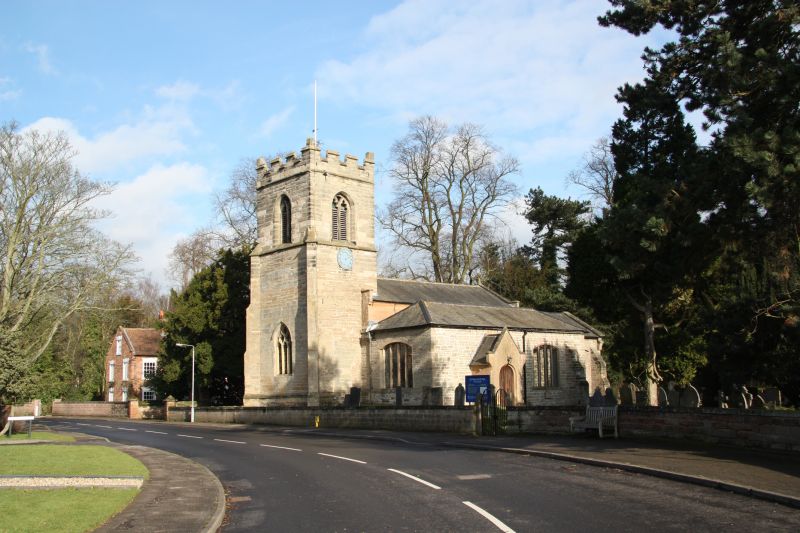 Parish church. C12, C13, C14, C18, C19, restored 1898. Ashlar,
dressed coursed rubble. Slate roofs, the south aisle being
hipped. Coped porch, east nave and east chancel, nave and porch
also with kneelers and nave with single decorative ridge cross.
Single external stacks to south side of east nave and west of
north aisle. Tower, nave, aisles, north porch, north vestry and
chancel. Diagonally buttressed late C14 tower of 2 stages with
bands, set on a plinth with damaged moulded band over and
embattled with remains of single corner pinnacles. The west side
has a single arched C14 window with 3 arched and cusped lights,
reticulated tracery and hood mould. The 4 C14 bell chamber
openings each have 2 arched and cusped lights and cusped tracery.
Under the north and south openings are single clock faces. The
south and north sides have single rectangular lights. The north
aisle, widened in the late C19, has in the west wall a single
cavetto moulded C19 rectangular window. The buttressed aisle is
set on a shallow plinth and has a re-set C13 chamfered pointed
arched doorway with hood mould. The single flanking buttresses
support a wood and slate gabled hood. To the left is a single
C19 4 light window with ashlar mullions. The early C19
clerestory has 3 C19 rectangular windows with cavetto moulded
surrounds. The C19 vestry is set on a shallow plinth and has in
the east wall a single pointed arched window with hood mould and
label stops. The dressed coursed rubble C12 chancel is
buttressed to the north, which was rebuilt in the C19 and has a
single restored C14 3 light window with arched and cusped lights,
cusped tracery, hood mould and flat arch. The east chancel has a
single restored C14 arched window with 3 arched and cusped
lights, cusped tracery and hood mould. The buttressed south
chancel has a single restored C13 lancet with hood mould. To the
left is a chamfered pointed arched C13 doorway with hood mould
and right label stop. Projecdting from the far left is a C20
breeze block and slate lean-to with inner single rectangular 2
light window with single ashlar mullion. The south aisle,
enlarged in the early C18, has in the east wall a single restored
C18 segmental arched 4 light window with ashlar mullions. The
south wall is buttressed and has a single similar window. The
C19 porch to the left is set on a plinth and has a cavetto
moulded arched entrance with C20 door. Over is a shield with
carved cross. Inner round arched doorway with panelled C18
double door. The west wall of the aisle is set on a plinth and
has a single similar 4 light window. A rainwater head here dated
1898. The south clerestory corresponds to the north. Interior.
Three and a half bay early C14 nave arcades with octagonal
columns and east responds, double chamfered arches and hood
moulds to the nave side. Tower arch double chamfered to arch
only. C12 unmoulded chancel arch with imposts and hood mould,
the east side with flush relieving arch over. North aisle/north
vestry chamfered segmental arch and north vestry/chancel arch now
with organ. In the south chancel is a blocked round arched C12
window, below left is the blocked priest's doorway. In the north
chancel is a small aumbry. Low chancel screen with decoratively
carved and plain C17 panelling and small barley twist balusters
further decorated with carved figures. C18 panelled reredos with
some C19 decorative panels to centre. Reconstructed C13
octagonal ashlar font and pedestal. There is a C12 pillar
piscina. C17 pulpit with decorative panelling. Choir stalls
erected 1925 using decoratively carved C17 panelling, further
decorated with carved heads. Many C18 panelled box pews, the
remainder C19. Some C18 panelling to the south aisle. C18
turned altar rails. Chair with C17 decoratively carved back.
C17 communion table with turned legs. Prie-dieu using C17
decoratively carved panel, further carved with figures. In the
north aisle is a reclining C14 figure said to be Robert de
Nottingham with feet resting on a dog, the remains of angels
support the head and a worn instription around the edge.
Adjacent to this is a carved head and a small bowl, both ashlar.
In the nave floor is a brass plaque to William Savile, 1681. A
board in the north chancel details "Donations to the poor of the
parish of Oxton" and a board in the tower details the benefaction
of Mr. James Harvey, 1835. There are 5 hatchments in the nave.
In the south aisle is a George II Royal Arms altered to George
III.