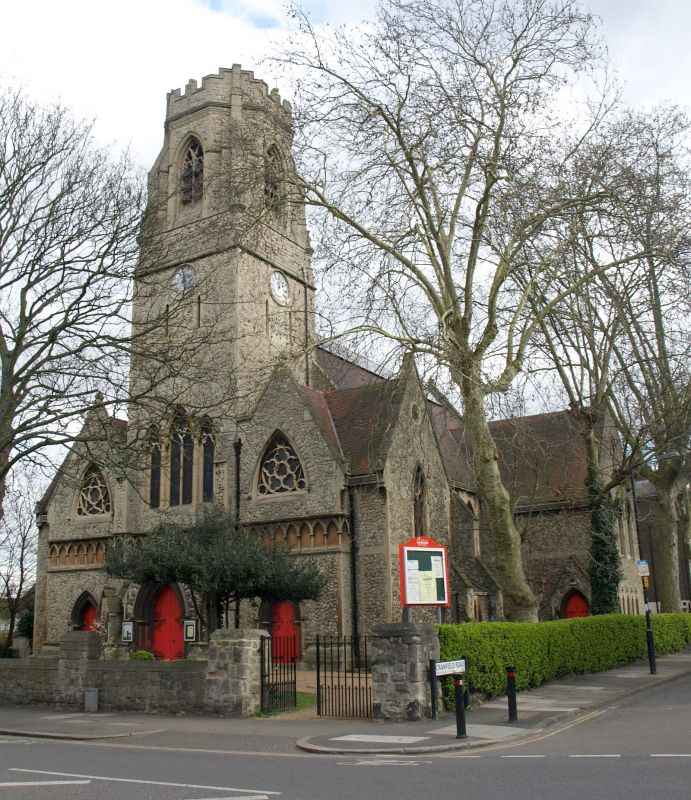 II
DATES OF MAIN PHASES, NAME OF ARCHITECT: 1866-70 (design 1865) by Frederick Marrable. W tower completed by Arthur Blomfield under a faculty of 1890.

EXTERIOR: The church forms an imposing sight on the corner of two roads. The usual view is dominated by the robust W end which has been likened to a Westwerk of medieval German churches. This arises from the substantial vestibules that flank the W tower. There are three entrances in the W end, one through the tower and one either side in the vestibules which provide access to the internal gallery. The central entrance breaks forward and has a gable over it. Above the entrances and stretching across the full width of the W end is a band of blind, shafted pointed arches. Over this the vestibules have gables each of which contain large traceried spherical triangle windows. The W window of the tower consists of three components with a 1-light/2-light/1-light configuration, each part having Geometrical-style tracery. The vestibules also have N-S orientated gables each with a two-light window. The top stage of the tower is octagonal, has battlements on top and, on the cardinal faces two-light belfry windows: the intermediate faces have buttress-like features. The nave is of three bays and has very large three-light clerestory windows with varied tracery in the style of c.1300. The aisles are lean-tos and have three-light graduated cusped windows without any hoods over them. Between the bays are large buttresses which are also internal to the aisles and which are a key to the interior architecture of the church. There are substantial transepts with windows in two tiers: the upper tier has three pairs of two lights (with hoods), the lower five single-light windows (without hoods). The chancel is lower than the nave and ends in a three-sided apse. It has a series of two-light windows with tracery from around c.1300. On its N is a complex of a vestry and a quite substantial parish room. Between the latter and the chancel the vestry has a triangular shaped E end.

INTERIOR: The interior is a highly impressive and inventive space with a wide nave and passage aisles cut through the buttresses. The surfaces are bare brick, mostly yellow but with red also used to create polychromatic effects. At the W end there is a gallery which extends across the entire width of the church and which is set on three broad arches and which reflects the tripartite nature of the exterior. There is also an upper tier of arches framing the vestibule and tower W windows. Spanning the nave are bold transverse brick arches which link to the buttressing system. There are sturdy black and white mottled marble wall shafts to the arches: these rise from corbels which have, unfortunately, been painted, and the shafts also have stone foliate capitals. The roof between the arches is in three tiers, is boarded and has arched wind-braces. The nave has three bays of low arches to the passage aisles with notched brickwork and octagonal piers. A further E bay is much wider and has tall arches to the transepts which contain raked galleries filled with seating. The chancel is much narrower than the nave and is viewed through a tall arch with a red-brick head and a pair on detached marble responds. The chancel is covered by red and yellow brick vaulting.

PRINCIPAL FIXTURES: The stone pulpit (N) and lectern (S) are an ornate high Victorian pieces and form a pair but have, regrettably, been painted. In the sanctuary the walls below the windows have been beautifully decorated with tiles, mosaic and opus sectile, probably in the late C19. In the centre is a reredos showing the institution of the mass, flanked by figures of saints Peter and Paul. The adjacent walls have further figures of saints and the walls flanking these have patterned tilework of various colours. The font is chalice shaped and has a variegated brown marble bowl on a cylindrical marble stem. There is extensive stained glass which fills nearly all the windows, much of it by Clayton and Bell. The church was reordered in 2006 when the C19 seating in the nave and chancel was removed and a new floor covering laid down.

HISTORY: The church was built to serve the population of this area of Brockley as it expanded in the mid-C19. The foundation stone was laid on 25 May 1866. Building seems to have been slow, continuing to 1870. The church is notable for its unusual and imaginative planning and massing and the great spaciousness of its nave. At over 40 feet it is much wider than most Victorian churches. This was achieved by reducing the aisles to mere passages and supporting the wooden roof on stone arches rather than on timber principal rafters. The use of passage aisles, which became very popular in C20 churches were a novelty in the middle of the 1860s when St Peter's was designed, having just come to prominence at G E Street's church of All Saints, Clifton, Bristol. The architectural press commented on St Peter's with The Builder noting that the stone transverse arches greatly enhanced the monumental effect. In contrast the Building News thought that, as a consequence of these arches, the church was more successful as an engineering achievement than an architectural one.

Frederick Marrable (1818-72) was articled to Edward Blore and is best known as the first superintending architect to the Metropolitan Board of Works, a post he held from 1856 (when he became a fellow of the RIBA) to 1862. He designed the MBW's offices (now demolished) in Spring Gardens which became the first County Hall for its successor, the London County Council. Marrable, an associate of the Institute of Civil Engineers, died suddenly of heart disease aged 54.

REASONS FOR DESIGNATION:
The church of St Peter, Lewisham, is designated at Grade II for the following principal reasons:
* It is a very inventive mid-Victorian interpretation of Gothic with an impressive wide interior and interesting planning.
* It still has a number of fixtures of interest.