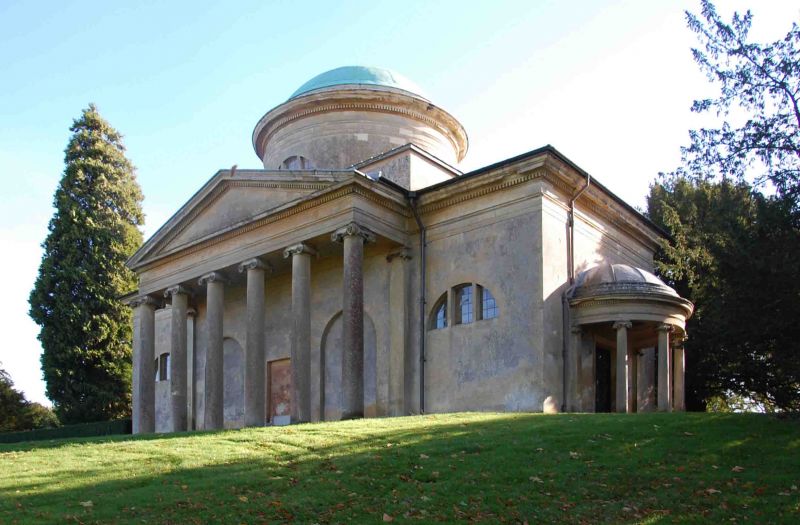 Church. 1764 by the 1st Earl Harcourt assisted by James Stuart. Limestone ashlar
with a copper-covered dome. Rectangular plan with projections to all sides.
Principal (north) front has a projecting hexastyle Ionic portico flanked by
Diocletian windows; the heavy dentil cornice to the entablature breaks into a
triangular pediment over the portico. Within the portico is a blind doorway
between blind arches. The south front is similarly pedimented but the projection
is enclosed and has a central arched doorway with fine wrought-iron gates. The
east and west projections are lower and semi-circular with half domes, that to
the west forming an entrance porch with Ionic columns. The drum of the main dome
rises from a rectangular base and has a deep entablature above 4 Diocletian
windows. On the east wall is a large memorial to Reverend Dr. Byron Eaton (died
1703) with a bust, on a carved and panelled base, framed by Corinthian columns
supporting an open segmental pediment with cherubs and a central cartouche. The
monument was saved from the earlier church. Interior: a central rotunda between
2 rectangular spaces, linked by eliptical arches. The rotunda is surrounded by
niches and has an arched opening to a small baptistery on the south. The
sanctuary has an apsidal recess behind the altar. Walls have moulded plaster
panels containing texts. Fittings introduced in 1880 include elaborate stalls in
C16 Italian style, with panelled backs divided by Corinthian columns, which line
the walls, a matching communion table, and a communion rail with 4 gilt C17
Italian angels. C17/C18 carved wooden lectern. Gadrooned font of 1843 has an
Italian Baroque cover with hinged doors. 2 chests with very fine lock
mechanisms. Four C19 hatchments. 3 tapestries including C17 Flemish "The Tribes
of Israel". Various relics from the funeral of Edward VII. Harcourt monuments
include four C19 busts, a full length effigy, a child's effigy and a fine framed
marble portrait, plus several C18 and C19 wall tablets. The church was intended
as a temple in the Classical landscape formed by the 1st Earl. It is said to
echo the entrance front of Chiswick house. The mason was John Hooper and the
cost £552 12s 1/4d. The church is now redundant.
(Nuneham Park is included in the HBMC County Register of Gardens at Grade I;
V.C.H.: Oxfordshire, Vol.V, p.247; BUildings of England: Oxfordshire, p.725; G.
Worsley "Nuneham Park Revisited II", Country Life Vol.177, 1985, p.64).