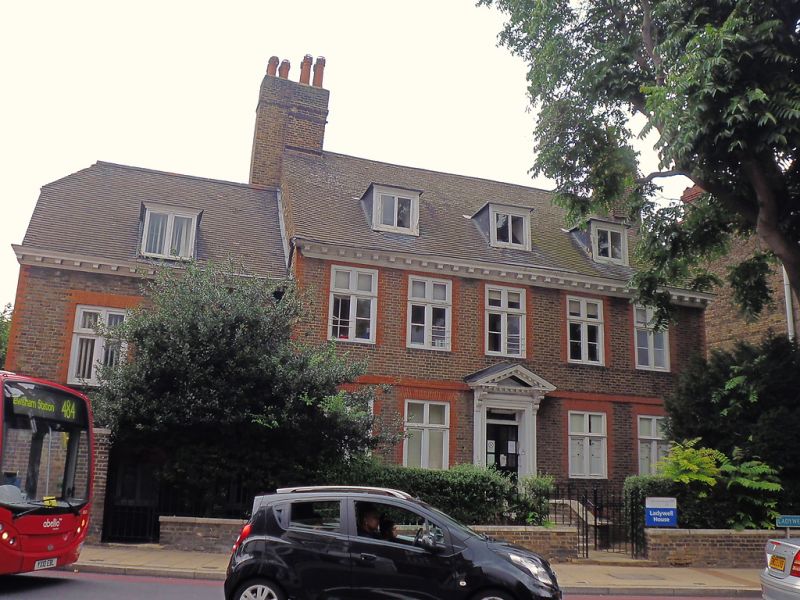 2.
Former vicarage, now offices. 1692-1693 for George Stanhope, vicar of Lewisham with additions of 1879-1881 by Edwin and Hilton Nash and 1894-1895, the latter using bricks from the demolished Lewisham House, which formerly stood opposite. For many years the property of the Legge family in whose gift was the living of Lewisham, usually filled from members of the family. Double-span house of 2 storeys, attic and basement, 5 windows, slightly irregular. Very high pitched roof, renewed in machine tile, with end chimneys partly renewed. Moulded and modillioned eaves cornice in front, plastered coved cornice behind. 3 square dormers with later casements. Brownish brick with red brick dressings, ie quoins, lst floor band, window jambs and gauged brick ground floor window arches.Original cross windows with casements mostly renewed although 3 original iron ones remain. Modern double door, with plain rectangular fanlight, in moulded architrave. Doorcase of flat pilasters, swell frieze, curved brackets supporting breakfront cornice and pediment, both with modillions.
Inside 2 staircases, the main one with spiral twist balusters and square newels. Panelled dado to stair well. Backstairs with slightly bullous turned balusters. Several rooms with original panelling, including entrance hall, L-shaped with segmental arch over. 6 early fireplaces, 3 of them corner ones, with shouldered surrounds and Dutch tiling. One has carved sprays at sides. Brick cellar with some original floor bricks. This cellar was used as parish lockup after burning of Watch House in early Cl9 and attachments for door bars remain.
Back extension late Cl9 and West side extension also late C19, in keeping with house. RCHM.