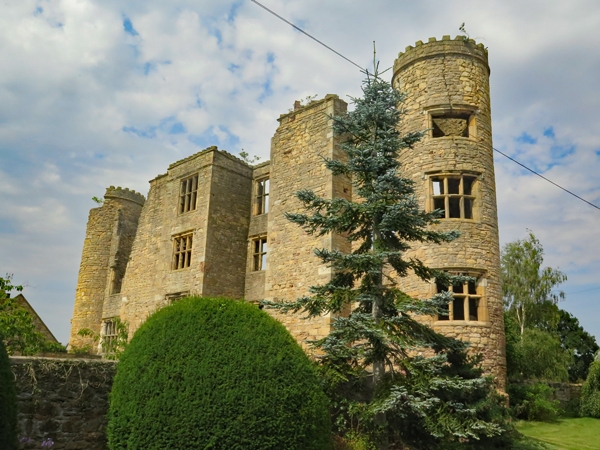 Ruined mansion. Mid-late C16. For Hercy Sandford (d1582). Rubble limestone,
no roof. 3-storey, 9-bay symmetrical south wall of courtyard-plan mansion having
round corner turrets, projections for external stacks and central porch; bases
of rear corner turrets survive, that on right linked by section of plinth wall.
In Tudor domestic style with transomed, ovolo-moulded mullioned windows mostly
of 3 lights. Large quoins, chamfered plinth. Central porch projection has
doorway with double-chamfered surround and Tudor-arched lintel with hoodmould;
blocked 3-light mullioned window over has hoodmould. Transomed 1st-floor window
with hoodmould now has wooden pigeon holes; transomed 2nd-floor window beneath
dripcourse. 3 bays to each side have blind central stack projections surmounted
by sections of mulled friezes and with diagonally-set stack plinths; bay 2
collapsed above ground floor. Turret at left end ruined, that on right intact
and with windows set on the curve, 2nd-floor window without mullions, string
course beneath rebuilt parapet. Right return: plinth remains and has projection
for stop-chamfered doorway; base of turret on right. Left return: base of rear
turret with chamfered square-headed doorway attached. Interior: rear of facade
has large ground-floor fireplaces of which the relieving arches remain; triangular-
headed fireplaces to upper floors. Heraldic panels on the gatehouse (q.v.)
point to the date of construction being 1565-82. The building was sold to Sir
Edward Osborne in 1636. His successor Thomas Osborne, Earl of Danby lived there
until after his marriage; he became Charles II's chief minister and was created
Duke of Leeds in 1694 after which time the family moved to Kiveton Park. A
scheduled Ancient Monument.
M. Girouard, Robert Smythson and The Elizabethan Country House, 1983, p119-
20.
J. Hunter, South Yorkshire: The History and Topography of the Deanery of Doncaster,
1828-31, p310.
N. Pevsner, BOE, 1967, p515.